What do you do after a Big Bang Mojo day, when there's "storm" (and I use quotation marks with a most sarcastic of intentions) brewing outside?  Why, work in the basement, of course.

I tried not to expect the kind of high I felt on Monday again, because I would have been disappointed, so I tried to think.  Instead of moving on to other hues, I wanted to stick to the dirty orange range and I sampled with a) a dark burgundy with a bit of brown in silk/cash mix, b) a slightly dirtier orange, and c) Monday's dirty orange and said slightly dirtier orange used alternately.  I looked at the unfinished scarf, and the samples from near and far, with all available lights and with only a few of them. 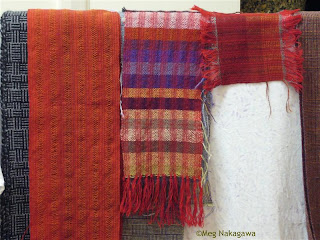 I still couldn't decide, so I brought down every single cone and ball of cashmere and silk/cashmere mix I own downstairs and sorted them. 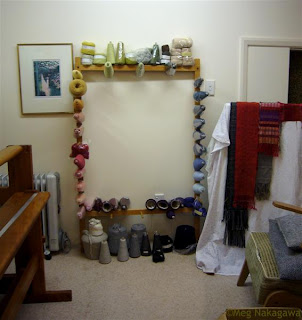 In the end, because I can get three or four scarves from this warp, I went in another direction.  I wove with a mid/dark gray weft; this is the one where the value is so close to most of the reds in the warp that the reds almost disappear.  I'm not sure if I like it as a scarf, but the finished cloth, to me, has a look of the gray weft devouring the reds. 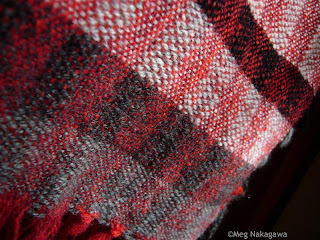 (The bottom gray.)  And how have I come to own so many pink cones??