With the red cashmere warp, I found myself revisiting something I did at the earliest stages of my weaving.

I think it was in 1997. I had owned my first four-shaft jack floor loom for two years, but never wove on it, because I was intimidated by it. And even though I coveted four shafts so I could weave twills, and undulating twills in particular, the first warp I finally decided to put on was plain weave. I think I told myself I wanted to get used to the loom first, but the fact is, having woven only on a rigid heddle for so long, the concept of twill boggled my rigid mind, and I did not understand the structure.  And I still tend not to try a new structure until I "understand" it.  (I wove my first undulated twill in, I think, 2002, on my current jack loom.)

I wanted to weave a set of napkins/serviettes with my Swedish cottolins, of which I had many shades of blue, a green, a pale yellow and a pink.  But I wanted something more than mere arrangements of colors.

I found a lovely example in "Handwoven's Design Collection 15: Sensational Scarves", page 4, and of course it was a lovely blue piece.  The example uses two weights of cottons in stripes in the warp and the weft, ergo creating a check with density.   I read the instructions on page 2, and to my amazement, it was dead easy to understand.  There was the minor point of the example using threads of two weights, whereas all my cottolins were the same size, but I figured using three ends in place of the thicker yarn would work, so I put on a warp.

The vertical stripes worked like a charm, but my beating was unsteady and I decided to weave in stripes and not checks. (To this day, I am intimidated by strips for fear of inconsistent beating.) Here they are, 14 years later, my well-loved set is a little stiffer, but still in use especially when we go on picnics. 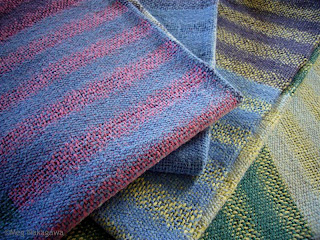 Back then, I don't remember calculating the different DPIs, but I played it by ear, or eye in this case.  And I admire my gutsy newbie self.

I had a warp in five or six different reds in a random order, and some time in the last week or so for no apparent reason I had decided I was going to weave the same crammed/spaced plain weave.  But this time I changed the width of "stripes" as well as the EPI several times before I was willing to sample.

At first I wanted to weave "clear" colors, and tried dark grays and black as well as several purple/blues.  But I enjoyed the unexpected results in my last warp, where the color of the cloth were quite different from what one might expect looking at the individual colors used.  (I promise I'll take pictures of the Log Cabin scarves once I wet-finish them.) I wanted to do some samples with unexpected combinations, and with a red warp, what better (or worse) than green wefts?? 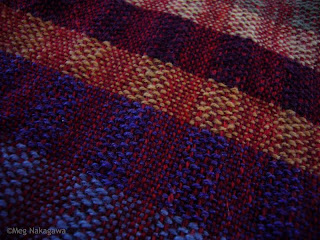 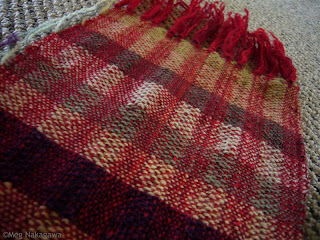 I like the "clarity" in sample with the darkest purple weft; it would be a rather stark looking piece.  The different reds stand out equally against the black weft, making it almost a severe piece.  But I can't stop looking at the dark green weft sample, (the one further away,) either; the green is a slightly blue olive green, but in the cloth it almost looks a nuanced gray, much nicer than the three grays I sampled.

I don't know if I am going to stay with these DPIs; the washed but not pressed sample looks a little too rustic for my taste, especially in the spaced parts.  I don't know if I will weave pieces with one weft color, or mix and even attempt a check.

Colors are  interesting; the more I look, the more I prefer the unlikeliest combinations.  And I get to sample them and decide which ones to use; it is a little bit like playing god.
Posted by Meg at 1/07/2011 07:35:00 PM