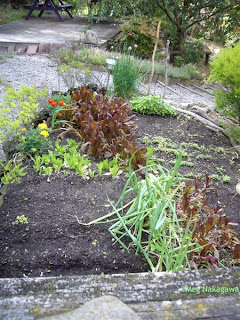 January 12.  Because I've photographed the lettuces about the same time, in the early to mid morning most days, I thought to shoot them in the glare of the mid-afternoon for a change. When I looked up from the kitchen, though, I had an unexpected visitor - our resident C Street tui . For a moment he was sitting on the taller stick staring at the lettuces, (or something else), and then he hopped on to the baby rocket area, even after I quietly opened the door, but then a few seconds later he was gone.  I must not have had whatever he hoped to catch.