In spite of perceived weather-weirdness, (and I can't tell if this has been a particularly cold winter, if we had more cold days but not at significantly lower temperatures, or if it's just me,) I've been making steady progress in the garden. That's steady, as in I go out and do stuff, but so far this winter it's been limited to the "outside my kitchen window" area, which is about one-seventh of our vast estate. (It used to take a couple of days to tidy this area Pre-Convolvulous.)

Nevertheless I had a mini goal of finishing this little patch by a certain date, the third or fourth revised date having been today. Then yesterday morning, my beloved 17-year-old leather boots decided to retire and let me know by allowing two of my left toes to slip outside the boot while I perched on a slope lifting a few unsmall citrus/camellia/name-unknown branches/trunks we pruned last November and left on the ground to rot; they prevented surface weeds smartly but not the C-word, so I've been moving them to a temporary heap and digging all week.

When I got a small hole in one of the soles I bought some expensive, bouncy insoles which made these boots the heavenly, never-before experienced comfortable footwear, and watertight. When I got a small tear near my left big toe, I brought it to the local shoe wizard to have it resoled, but the leather on the sides were too far gone for repairs. Still, they lasted further six-to-nine months until the recent up-and-down with heavy load. Channeling a little VvG. 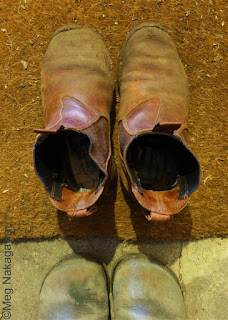 I got these when I had an office job and a cold office. The first year I wore them at work, the second year, as they started to get scuff marks, all the time, and by the third, I wore them everywhere but work. At some point, especially since the third pair of gum boots intended for garden work that didn't fit, these became my Go To guys. The leather is now so soft I can sit down on the ground the way Japanese ladies do in their kimonos, on my knees. And I can't conceive of throwing them away. But I need a new pair so I can climb the slope without half of my left foot coming out of the boot.

Never did I wished I could drive like yesterday morning; I could have gotten a new pair and carry on as if nothing happened, even though new ones would have been rather stiff. Or I could have carried on, finished yesterday's job, then gone into town. Heck, I could have done the morning's job, as I did, then taken the bus to go into town, and then I wouldn't be posting pictures on a blog this morning but would be nearly finished with this patch by now.

But I didn't. I was tired yesterday afternoon, so planned to go into town with Ben this morning, but had I done so, I would have watched a movie, walked around town, and wasted a whole day as I tend to on these occasions, so I changed my mind; that I could have gone into town, gotten a new pair, taken the bus home and get back in the garden by 11AM did not occur to me. So I sat at the kitchen table pining to haul half-rotting tree trunks and dig nasty roots, thinking of how many centimeters in which direction to move one seedling that is too near another, and planning how to proceed with the next patch.

Oh, well, we'll probably go into town tomorrow, get boots, maybe brunch or coffee and pastry, check out the bookshops, maybe the Saturday Market, maybe get some herb seedlings, and gypsum at the hardware store.

It's not that I haven't worked at all, but the house has been too cold most mornings ergo the steady gardening. Plus things haven't gone as planned. 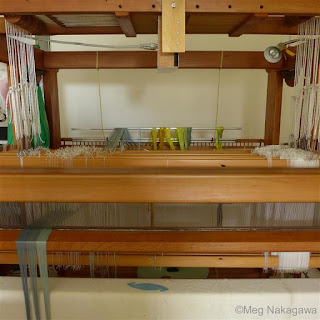 I started threading a cotton warp, alternate 2/20 and 2/60, intended for a commission wall piece, (in spite of my repeatedly telling the client I don't do wall pieces,) but I keep changing my mind about the sett and now I think it'll be too narrow for a wall piece. It'll make a few interesting scarves, but now I may need a new warp for the said commission, and I've felt a little discouraged, let's just say, to keep warping the 1424 ends, half of which I can barely see. 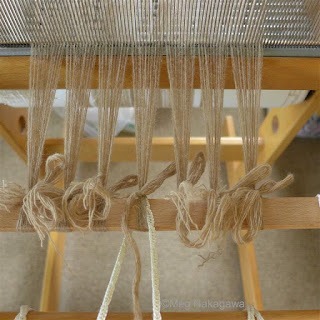 I threaded a cashmere/angora/something warp of alternating native and overdyed-with-walnut-shells pale pink camel, and it was so so so fuzzy my eyes and sinuses had a hard time just with the threading, so I'm dreading the weaving. This is for one commission, one Thank You, and one merchandise. If I live to tell the tale, it should make wonderfully fluffy pieces, if not somewhat shed-y.