Yesterday afternoon I worked further on some of Saturday's cards, and started new ones, so I'd have enough to choose 10-ish to send to Jade as promised. I was overthinking the project's meaning and wasn't enjoying the making as much as I usually do collaging on Saturday; in other words I was out of practice. On Sunday, though, I slipped into the familiar mode. I had a recurring footage of opening doors, finding paths, finding allies and laughing along the way. I did aim to make less girly ones. (Note the light house? LOL. I had another of the back of a man on a tractor at dusk but it was too big and I didn't want to cut it. A few of these are too big, but I'll send them anyway.) And the folded format complemented the opening-of-doors and made me feel rather clever.

Like weaving, although I did nothing else all day, I'm incredibly slow, but 12 hours later I felt happier overall with the results. 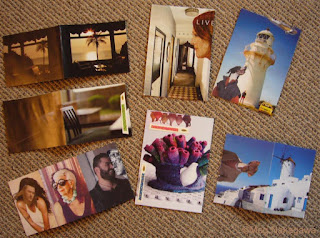 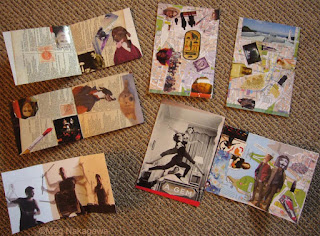 I must prefer simpler work, and ruined a few, again, overworking them. (The one with two figures on Sydney's map at lower right suffered an excruciating slow death all afternoon. It was the best when I started.) Some have wonderful outsides with incomprehensible insides, and I left two untouched. I trust whoever is making the care packages will choose/discard as appropriate so I'm not worried nor overly embarrassed. And I position my effort as not small, encouraging "art" but gift cards, and if a recipient sees one and think, "WTF" or have a wee laugh and crumples it and throws it away, I don't mind.

Like the old Japanese/Chinese(?) proverb says, charity is not for the recipient; the gift was from Jade to me for the opportunity to get back into collage and to see it from a different perspective. I work best if I mindlessly start putting things together to make something visually pleasing to me, and if meaning/message/theme emerges, that's just bonus.
Posted by Meg at 6/20/2016 10:46:00 AM