Oh, the Drama
(Scroll down for the less dramatic Art Therapy part.)
Just when I thought we were getting the hang of our new diet and I started thinking of either weaving or weeding, Ben came down with a bad cold, which would have had him down and out for seven full days had he not been working from home every day, in spite of our Medieval, (or what I ccall' "Mid-Evil",) Internet connection, while I contemplated what else he could slather on the sides of his raw nose. Usually I put it down to him working in a school with some colleagues with school-age children, (a.k.a. incubators of germs with less protection than hospitals,) I also contemplated bodies reacting to change in diet and his rather sudden increase of supplement-intake, some by Doc Karl's prescription, the rest by his recommendation. Ahyhoo, Ben need a letter from Karl stating he's been legitimately sick, and got two additional supplements for a wee while. However, as of this afternoon he's lost 8kg, so he doesn't have to go on 5:2 or any other special diet but just keep eating the kind of things we've been eating, in probably the current portion. Lucky duck!

We had a wonderful dinner at neighbor Duane and Barbara last night, with JB & Ali as well. We've liked Duane and Barbara ever since they moved in next door... what... eight years ago? ten years ago? and felt tempted to have them over, but you know, there is that mess at ours, and my role as the "recluse", so we hadn't; I took up every chance to chat with them over the fence, though, and a few plants/fruits have crossed our fences over the years. We are semi-seriously discussing dog-sharing.

My philosophy prof Dr C, (who insists my calling him by any other name but Dr,) and Mrs C will land on South Island tomorrow, for which I should be cleaning the house instead of blogging, just in case, but here we are. The last he saw me I was not quite 24; apparently I was that young once.

Art Therapy
And now for the part that was supposed to be more dramatic but turned out, at least for me, ever-so calming. I don't know what I expected, (OK, a flash/bang revelation and an instant/painless transformation,) but I had been curious about Jade's Women's Creative Wellbeing workshops after seeing photos from her Sydney versions. She held her first on-line version so I jumped on the opportunity, joining two lovely Aussies.

Most sessions we discussed our preceding week; additional thought we might have had about what we made; basic themes/elements for the week; then made "art" based on those themes/elements; reflected/observed/opined on them; and finished with maybe a little meditation/relaxing exercise.

When I was looking at the Sydney workshop photos, I kept thinking, "Oh, I would design them better and make them prettier," but I learned the different modes of "making" quickly. At least in my case, after learning/thinking about the themes, the making part was an act of expressing/symbolizing those ideas/concepts/feelings, not working towards a preconceived visual piece. I think this is super easy for weavers to distinguish. And from my experience in the figure drawing, I was able to dive right into the making, with no other thought than just getting started. If I were a little less cynical, I'd say it was almost hypnotic.

I could talk about my end piece at length, and some of it was what I thought as I painted/glued/smeared a color or stitched on a bead, but I couldn't tell whether/where/if Weaver Meg entered in "Megsplaining" as I do with weaving.

One thing that surprised me was, because I'm usually slow and am seldom finished in the allotted time, I expected to want to pretty up the pieces after each session. But all of these end pieces were of a specific time, in the company of these specific women, and of a specific mindset, and after class, except to draw/glue/stitch on whatever pieces I already had in hand/mind, I didn't feel compelled to improve them cosmetically. They were complete. I'm sure the experience would have been just as special, Jade is skilled as an art therapist/coach and has a wonderfully soothing voice, but I also owe a lot to the other participants in creating a low-keyed, inspirational environment.

I often associate reds/pinks with good/hot/too emotional, orange/yellow/gold with wonderful/brilliant highlights, blue with cool/calm/well-thought-out, and black with not good/tunnel/end, but I was surprised how often green crept in, and this I give credit to my green threads and paints for enabling me to use them as mixing colors. (I don't usually like greens and browns, but find lime green and olive green especially versatile.) Without even further ado, some pics. 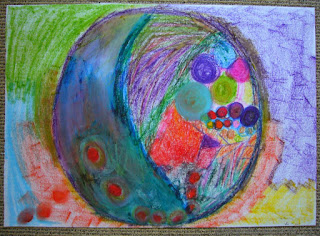 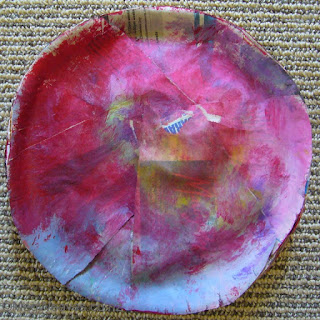 Week 2. Public Face/Private Face, a mask. Home made newspaper papier mâché, acrylic paint, about 25cm in diameter. It was suggested we buy papier mâché masks, but I wanted something rounder with a flatter nose so I attempted to make one. (Actually two.) The glue didn't dry completely so I couldn't put on a small nose and after class it started disintegrating, but I'm happy with these symbolic (?) incidents. This is my private face, on which I spent much longer, paying attention to details. 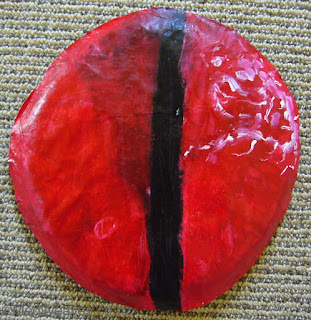 My public face, which, working at home and not socializing much, didn't require much detail nor thought; I really don't think about it any more. 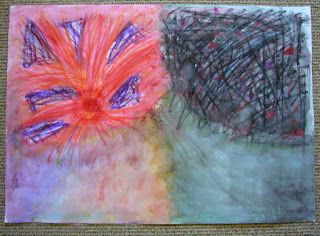 Week 3. Self Care and the Nervous System - Four dimensions of sympathetic and parasympathetic nervous systems. Water soluble crayons, A2. 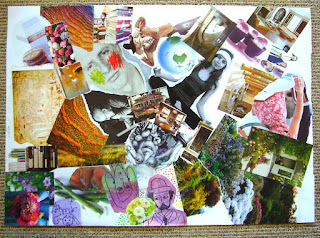 Week 4. Cycles and Three Stages of Women - Maiden, Mother, Crone. Collage, A2. I've been thinking about "Goddesses" for some time and been looking at a lot of Goddess- and White-Witch-related artworks, reflecting on these feminine labels for some months. Not straight-forward for a kid who dismissed friends in play group at age 3, telling them Santas were just parents. There was never any unexplainables in my life until we visited Culloden Battlefield on our honeymoon, (couldn't see much in the fog,) when I suddenly became more open to ghosts first; then I even began to covet some mystery since I saw Gormenghast, read Harry Potter and Discworld, and delved further into Nick Bantock's art. The Brits do them well, don't they? There are Japanese myths/folklore, too, but I find them darker/scarier so I am more drawn to the more delightful of the European non-humans coexisting with us muggles. But I digress. I liked that Jade's Crones are not dried-up, discarded, invisible middle-aged women, but wiser, almost secretive and still full of juice. I'm going to read a little bit about them. 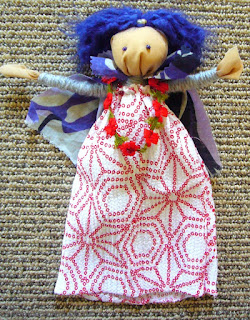 Week 5. Celebration and Gratitude. Fabric, threads, wool yarn, beads, about 26cm tall. I've wanted to make dolls most of my life and collected books on doll-making but The Perfectionist always interfered. so this is the first one I've ever made. I named her Mo, after my somewhat-White-Witch friend Maureen. Mo's superpower is flying; she can fly at low altitude, at a reasonable speed, for a short period, which is all she needs. I want to make more, perhaps periodically.