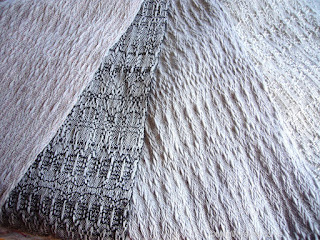 I finished the gray warp on Wednesday; I planned to fringe two scarves yesterday and two today and wash all, and even deliver them to outlet/s Saturday, (more on this next week). The pic is not treated, just gray-looking pieces, samy and almost boring, but elegant and suitable for a new outlet I'm trying to develop. 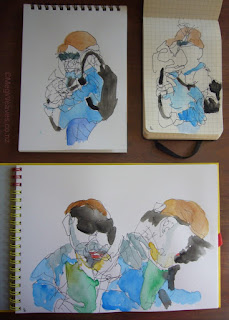 Came yesterday, I wanted to quickly audition small sketchbooks and watercolor half pans for the trip, but because I hadn't drawn since early June, (and I'd forgotten I'd drawn abstracts "every day" until end of May,) I had to practice first. By the time I had done one round, it was after 4PM. I'm still undecided on both counts, though the grid Moleskin, however much I love grid paper, is probably not suitable for watercolor if I want to save the drawings in relatively good conditions. But I did manage to make/attach color samples on each set. 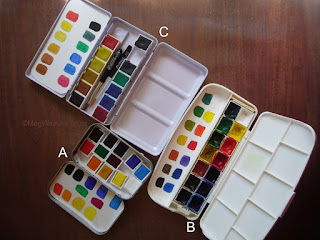 Now I have a conundrum. I love saturated colors, for which A is best, (albeit quite a strange set because, I bought colors at random one day and stuck them in a case, and I haven't even got a purple!). On the other hand, I adore moody, watery watercolor work other people do, which I understand one can practice for decades and still not control entirely, and B is best-suited. C is not as clear as the other two and for now not my favorite, but it's in my favorite case! I could easily travel with all three.

To be honest, part of yesterday morning was spent reading about paints, coveting art supplies, and comparing prices on three Japanese and two NZ websites.

A while ago I found I could buy good pigments online in Japan, (always felt intimidated about asking in stores, even more so just boldly buying,) and make paint by mixing with media. All I knew then was gum arabic is what turns pigments into watercolor; yesterday I learned watercolor and gouache are practically the same except the amount/proportion of pigment to gum arabic; the more g.a. the clearer the paint.  (Correct/augment, please, if you know about these things.)

That made sense because a couple of years ago when an American Letter Journal swap mate commented Japanese watercolors are in fact gouache, and thinking that didn't sound entirely correct, I went looking. Japanese websites said it's because we separate "clear" and "saturated" (my word, although I mean "not clear" without saying unclear or cloudy,) watercolor paints, and use the somewhat saturated kind in schools. Some art websites treat the two as if they are different paints, as I assume it's done in Western websites, without mentioning what every living Japanese use in school which is neither. Stuff I've bought in NZ are definitely not clear; in fact I can't tell the difference between my cheap watercolor and cheap gouache so I stuck them in one box years ago.

Here is a list of paints I grew up with:
* Oil - stinky, smelly, slow-drying; could kill you if you eat it;
* Acrylic - synthetic-based; usually dries quicker than oil but slower than watercolor; can be applied to many surfaces; allows drawing/pasting on top of paint surface; kids' oil paint;
* "Watercolor" - the more saturated variety, which makes sense because;
* Gouache - something unique to Western art?
* Poster color - very dense, water-soluble paint; usage similar to "watercolor" but suitable for painting large areas; colors don't mix well; cheap. One source says it's identical to gouache but with cheaper binder, reflected in the price.
* Clear watercolor - for grownups; requires a driver's license to operate, but the half pan palettes look devastatingly attractive.
* Gansai (顔彩) - paint for casual Japanese brush painting; binder vary depending on websites, could be gelatin, starch, glue, sugar and gum arabic! Always dry, never in tubes, traditionally in elegant small round ceramic dishes; colors don't mix well.
* Iwa Enogu (岩絵の具) Rock Paint - traditional Japanese brush painting paint; pigment and Japanese lacquer; not for the faint-heated; requires heavy-machinery license. I hesitate even looking at them in shops when I have rare encounters.
* (Not to mention a whole world of dyes.)
* (As well, "ink" we use in calligraphy comes in several dark colors and are used for drawing.)

If that's not confusing enough, Set A above bears a Dutch label, (though I can't tell where it's manufactured;) the clear B is made in Japan; and C has a French label, (ditto.) It's a little like when fussy friends criticize me for not distinguishing shrimp and prawn; they are both "ebi", mate.

One angel tells me to start buying better paints, (though my half pans are no sissies,) especially because I don't use that much; the other reminds me I don't need any more for now and this trip, going south with Mom, we are traveling several tax brackets above our station. Realistically, I'm hoping to augment A and fill the gaps and stop them moving around so much, and replace those almost gone in B.

Mom's cowl is growing, but I'm not sure how tall to make it. We Mitsuhashis have short necks so we don't want to drown in cashmere, but I don't want to give her a mingy neck warmer, either.

PS. In searching for "blind", "contour", "drawing", "portrait", I found some fascinating work which had additional drawing done after the initial contours, nor just applying colors. Even some of the ways colors are applied are fascinating on their own. It's worth a look if you are interested.
Posted by Meg at 10/05/2018 11:40:00 AM