In the weft candidates, I included two cashmeres and three merinos, the first set will make a more expensive end product but I have a few not-whites, and the second I don't have enough of for a blanket, but I wanted to see if my memory of these yarn textures were are merely nostalgic. Of the latter I tested 110/2 (<> 2/16) undyed 100% with scale, 76/2 (no idea) undyed 100% with scale, and 110/2 merino/mohair half and half undyed superwash. All I have left of my oft-used 100/2 undyed superwash is one medium-sized ball, so I didn't "waste" that. As it turned out, these three merinos ended up as soft as my cashmeres, but feel slightly heavier, and thus producing a nicer hand, that big-dog-leaning-on-me feel, characteristic especially of merino with scales. I was surprised how merino/mohair behaved similarly to 100% with scale in this context. 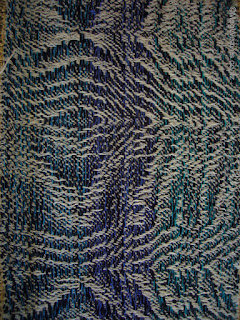 All others wefts were supeprwash merino of various ridiculously thin sizes doubled, tripled, quadrupled and in once case, quintupled. These remained too separated/unstuck even after washing, (i.e. they didn't fluff up,) and they don't look attractive in the long floats. The same could be said of the warp, but more on that below.

I also preferred not very white wefts to take the edge off the sharp contrast with the warp colors, but if in merino, there was only one clear winner, a newer 76/2 "undyed" 100% with scale. (Second last in the first picture. I put undyed in quotes because I can't remember if this is how it was sold.) I bought these from a garment manufacturer who decided to switch to superwash after getting complaints from customers their garments needed handwashing! When I first bought them, I immediately sampled to compare with the four old merinos and was so flabbergasted by the "dryness" I felt I put the cones on the highest shelf for when I could not get "good" merino any more. Until I sampled the elephants.

Mind you, there is nothing wrong with these, and doubled in the weft they produce a fluffy blankety cloth, but I can't help noticing a slightly dryer feel, as if the sheep was older or the yarn came from a drought year, or the treatment after shearing was harsher than old favorites. My syperwash merino and merino/mohair are still available, but at $300/$350/kg, completely out of my reach. 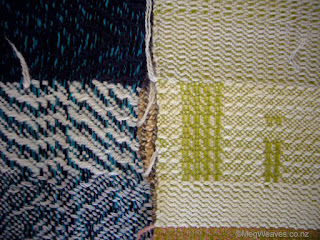 I sampled this weft the elephant sample as well and you can see it fluffs up nicely and don't look like two unfriendly strands. In the right sett/pick the A and the B sides appear clearly "opposite". 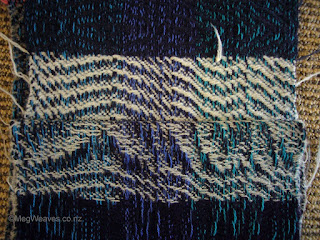 Sorry, bad comparison, as I made up the network twill as I worked, I expect to weave in this style; you can tell I was getting tired towards the end, but the bottom two repeats is the same as the top four. Portions in long floats fluff up well. In contrast to the old merino of the same size but using one strand in the weft, once steam-pressed this new merino stays flattened rather than fluffing right up again, which I find annoying.

The elephant warp has 2/30 superwash merino, two strands acting as one warp "end", three "ends" per dent in a six-dent reed; that's 36 strands of yarn or 18 "ends" per inch, best approximation with yarns I have of the trusty 18EPI in old 110/2 merino. I doubled the yarns to act as one in the hopes of creating an airier, (i.e. softer,) cloth. In this last/new sample, I tripled the yarn, and sampled three different setts in the hope of creating an even softer/thicker cloth:

Doubling the yarn in the elephant warp worked well, and the short floats produced a nice, tight but soft, light cloth. The tripled warp in the last sample feels even lighter/softer, but it lacks the weight I'd like in a blanket for a grownup; they, too, stay separated, and the thicker warp "ends" dilutes the scale of the design. This last is a interesting one because Ben said the end-product being much larger than the usual scarves and shawls, the bigger scale is a good thing; I think he's right but I have to get used to the look.

Next sample, I'll consider the distribution/proportion of colors in the warp; sample  doubled and tripled warp ends, and single and double strands of the new merino in the weft. I'm adding one more sett to the mix to see if I like the scale of the design better: 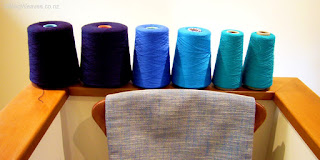 Warp colors with cushion cover colors it needs to match, but not exactly, and I want the blanket to be more saturated. And one more problem: I don't have a theme for this, making it hard to focus. I might have dream something up.
Posted by Meg at 11/17/2019 04:02:00 PM