I don't know if you've seen the 2008 film, "Wanted". It's about a group of assassins who end up killing each other, (what else?) but their headquarter is in a large factory with one loom weaving white plain weave cloth. In the cloth, if I remember correctly, are errors which are codes indicating their targets.
Back when we were newish to blogging, a fellow blogger alerted me to this film. Although it was a while before we finally saw it, the idea of hidden codes within cloths has intrigued me ever since. (The binary nature of knitting has been used for secret codes in both World Wars. See the second half of this excerpt.) I'm not sure if weaving ever has, though.

This is what I was reminded when I walked past the loom late last night. While weaving, I couldn't see the patterns, and I was more or less weaving blind as far as the placement of warp-y areas was concerned. (Even though I can now see yesterday's picture shows it almost as clearly, so if you are wondering what I'm on about, I don't blame you.) It wasn't until I saw the cloth in a different light that I noticed. And I walked by many times looking from different angles. 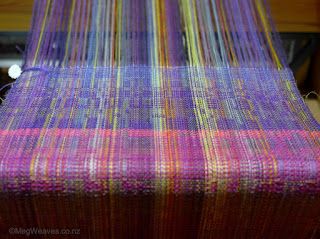