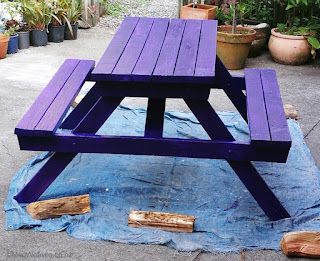 Day 14+7+86+34, January 5. 17 Delta community cases on the North Island, none in Nelson or the rest of the South Island. 23 cases at the border, but genomic sequencing is not finished. 77% of population and 92% over 12 double-jabbed. Anyone over 18 years old who received the second jab at least four months ago can receive their booster from today at walk-in centers, or phone in to book, or book online after January 17; that's the day we become eligible, but also 5-11-year-old become eligible for jabs, so expect something of a jab jam. And I still haven't read anything about ventilation, though a few weeks ago I read mention of filtration, once. And home testing is still some distance away.
EDIT: Thanks to UK Twittering health folks, the next morning I found this.
Today started hot but quickly turned cooler, which was a blessing because I've been loosing the plot, even though today's workload was a third of the last five days. Every year, I get excited about a clean kitchen, imagine cooking this and that, and hope to reboot a healthy lifestyle. But this year, I'm just grumpy... We have so much stuff. Still, tomorrow, Ben and I will finish the saga.
Ben also started working on his next project, repainting the picnic table I painted in 2009, not with the same color but close, because I bought the wrong one. The first coast is on white primer so it's looking light, but we hope after the second it'll look more saturated. 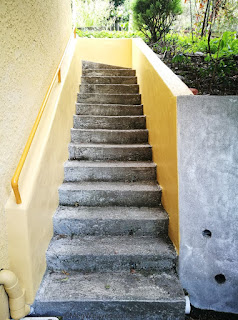 And this is what Ben did yesterday; he found plenty of the yellow primer from when we had the house painted last century, so he gave two coats on the sides of the stairs to our patio/front door. There is quite a bit of retaining wall to the right so we don't know if we're going that far, (it would make our place incredibly yellow,) but sometime soonish we'll get the top coat to go over the primed bits. These steps are dark, so it's also practical. 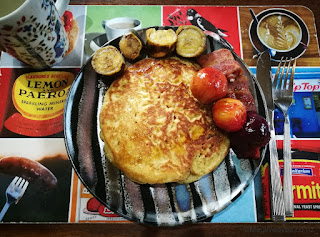 Day 14+7+86+35, January 6. 19 Delta community cases on the North Island, none in Nelson or the rest of the South Island; all 23 Nelson cases have recovered, even though short of links to North Island cases, the origin was never reported. 43 cases at the border; Omicron genomic sequencing to come, although these days they expect most/all are that. 77% of population and 92% over 12 double-jabbed. Since boosters became generally available yesterday, there have been increase in people getting first and second shots, also. What. Eva.
Today started with lovely rain. We had our first cooked late brunch (and attempted sugar overload) of 2022: Ben's almond and wheat flour pancakes, bacon, seared bananas, and seared extremely local plums, on a plate made by local artisan, with extremely locally roasted coffee. I washed the dishes afterwards, but we were so tired we didn't even talk much. It was easy deciding to postpone going to the store for a container and an extension cord needed in the kitchen. We didn't even think to watch a film, listen to an audiobook, or even read. I paced the house looking at all the unfinished business at one point.
I did manage to iron, because today was supposed to be the one cool day before the return of the heatwave, although looking at the forecast now, maybe not. Ben cleaned up an old, old paella pan we use all the time, especially for salmon; it had a couple of decades of accumulated caked-on built-up black stuff, but he took it all off and we can see the original paella pan and it's in a great shape.
Three more days of Ben's holiday left; he's going back to work at work on Monday after 145 days, except for the few hours on Friday in December. Weird. 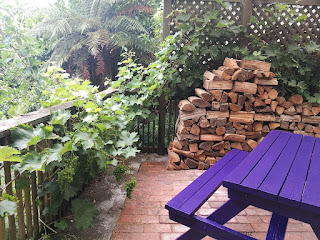 Day 14+7+86+36, January 7. 35 Delta community cases on the North Island, none on the South Island. 24 cases at the border; there is no mention of genomic sequencing or Omicron any more. 77% of population and 92% over 12 double-jabbed. Following Christmas Day and New Year's Day, there is to be no update tomorrow, either. Our traffic light system was based on two jab requirement; now that boosters are available and Omicron has arrived, the government is yet to announce any rules or policy adjustments. In fact, we've seen very little of public officials, not that I've been looking for them.
Today, we finished the kitchen. I did most of it, but Ben helped wiping down the high bits. Ben, though, since New Year's Eve day, finished two and a half big jobs and two and a half little jobs. This is probably the most productive we've been in years.
Because Ben loves to have coffee or lunch outside, we brought the purple picnic table just outside the kitchen. Now he can have coffee either here, or just outside the front door. I wished we thought of this last summer, when we planned to do these projects in the first place, because Ben would have been able to work from out here. 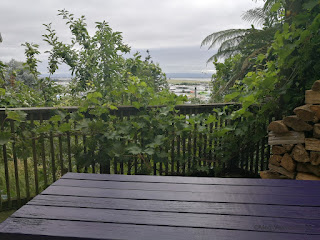 It's a little strange for us not to have the table set parallel/perpendicular to another straight line, but this way, we can sit next to each other and look out towards the water. It wasn't this industrial-looking when we bought the house 25 years minus three weeks ago, but there is water there. And when the grapes and apples are gone, we'll have a clearer view. It looks like rain may be coming back.
Ben'd been spending a lot of time in his office looking at his computer while waiting for the paint or oil to dry. A lot. I nearly said something, but he was doing what I asked, so I held back. It turned out he was working some of the time, enough hours so he has Monday off, too. Yippy!! 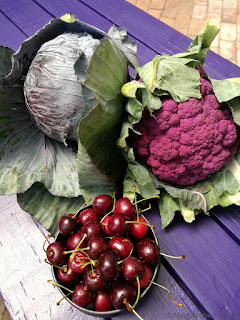 Day 14+7+86+37, January 8. No updates today, but two cases found in Wellington from a music festival in Tauranga. We ran errands, tied loose ends of the tasks we finished, and went food shopping. It's hard not to overdo veg and fruits this time of year. 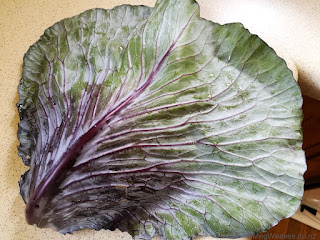 Day 14+7+86+38, January 9. 85 Delta community cases in the last two days on the North Island, none in Nelson or the rest of the South Island. 64 cases at the border; no coverage of Omicron. 77% of population and 92% over 12 double-jabbed.
Slow day where I washed/cut/manipulated so much veg we need another fridge, and Ben went around touching up projects he finished this summer. The outer leaves of the red cabbage are too tough to eat raw, (we used the inner leaves for coleslaw,) but don't they make you think of Beatrix Potter paintings? 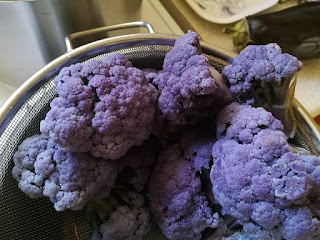 I'm also happy to report purple cauliflowers retain a lot of blue pigments after parboil, (more saturated purple than in the pic,) unlike the cute beans and carrots I grew some years ago which turned all pale. 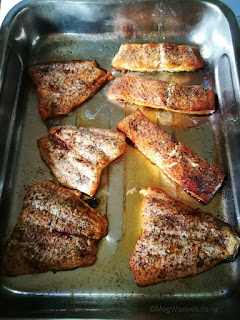 Day 14+7+86+39, January 10. 27 Delta community cases on the North Island, including Wellington,  none in Nelson or the rest of the South Island. 33 cases at the border; no specific coverage of Omicron. 77% of population and 92% over 12 double-jabbed.
A few Queenstown attractions are locations of interest. The big shot Auckland Anti-Vax guy preached in Christchurch. Our government is sounding more and more like other governments, being fine with Covid/Omicron in the community. I've been reading scary articles about the effect of Covid, especially Omicron, on diabetics, and also the increase in (identifying?) childhood diabetes.
My diabetic husband goes back to work-work tomorrow in this brave new world. I couldn't imagine being a parent.
Today was another-tying-up-loose-ends day for me; Ben smoked salmon; if you knew him in the 80s, you'd know how funny that last bit sounds. 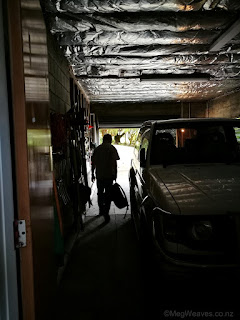 Day 14+7+86+40, January 11. 14 Delta community cases on the North Island, including Wellington, (linked to a north Auckland festival,) none in Nelson, but two in Canterbury to be included in tomorrow's numbers. 9 cases at the border; no info on Omicron. 78% of population and 92% over 12 double-jabbed.
After 146 days at home, Ben went back to work-work this morning, ending our third "lockdown", and so Season 3 of Plague Diary.
The government has not clarified how many Omicron cases have been found at the border for some time, but expect most/all positive cases to be that. Government ministers and high-ranking officials have been on holiday, I assume, as they have not been visible; Jacinda is rumored to be getting married at an American hedge fund family's holiday place at the end of the month near Gisbourne, and has not been seen in weeks. If you are to believe the MSM, the government wants us to prepare for mass spreading of Omicron in the community, as our health systems are "well-placed" for it. Good on scientists who continue to appear and write how they think we should face Omicron in the meantime.
Anti-vax/anti-lockdown propaganda continue to present problems, although big name activist continue to act with impunity, and Nelson is one hotbed. The American doctor specializing in weight-loss who sold vaccination exemption certificate for $80 in Kaiapoi had her license taken away, but has moved on to making chocolates. I'm not advertising the brand name.
Lastly, my favorite place in town, Volume book store, decided to go online-only. I can't blame them; the store is tiny; even before vaccination and anti-vaxers, some folks were offended by distancing or scanning; and the shop does well online. But loosing a place to accidentally discover hitherto unknown authors or beautifully produced books is a big loss. For now, I must try to get my head out of lockdown/housewife mode and into "making" mode, with the occasional, until it gets cooler, weeding and such outdoor pursuits. And the occasional, "OMG, look what's happening in Aotearoa" posts. And food pics. Maybe "I made this" pics.
Thank you for tagging along with us for 147 days. Be well, you and yours, take care; this thing is not over yet.
Posted by Meg at 1/11/2022 06:37:00 PM