It's funny how we get used to our tools and routines built around them, and to think we designed the routines ourselves at one time.

In trying to improve my tension, I've been talking to many weavers, and two things that came out in these discussions have been: a) don't tie on new warp and pull it through reed and heddles, and b) make two crosses when warping, one at each end.

A) is not a big problem on the four-shaft jack loom, but I'm still sitting on the fence on the 16-shaft, because of the time it takes to thread the darned thing. And it's harder to thread my 16-shaft standing in front of the heddles; I'll have to experiment with different positions, including the ways I hold my tongue. But as I start to experiment with silk and alpaca, it will become more important that I have even tension. Soooo... I'm playing this one by ear.

Now b). I knew I automatically made two crosses on my warping mill, but just one on the board, and after about 40 minutes warping beautiful Swedish cottolin in stripes of two taupes for a series of dish towels, I burst out laughing. Look! 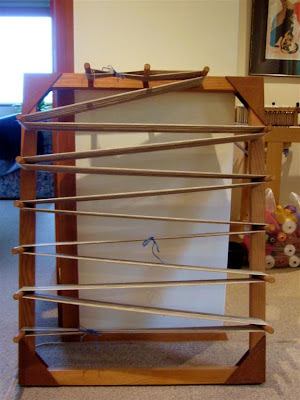 Unless I want to get a little creative in the way I make the cross, it's a little hard to do at the bottom just now. I hired Ben the Husband last night to drill three holes and glue in three dowels at the bottom to make life simpler for me, and am keeping my fingers crossed he'll have time to do it this weekend.

Amazing, because I spent the three weeks pondering why I don't make the second cross on this board, instead of how I should do it.