It was nice seeing Win and Jean yesterday. Win and I ended up talking for five hours, an overwhelming majority of the talking done by moi. Poor Win. And she has one foot in the dark side now; she's combining her weaving with felting.

In our little group of four planning a wee drawing exhibition in July, one member left in February because she started full time study, another is unsure because of her life circumstances, and I've been feeling ugh as you know, but the fourth remains perpetually cheerful and optimistic we cannot but forge ahead.

A while back I got out all the drawings I kept from the last almost six years of class and sorted them by style and focus. I still like quick gesture drawing the best, but they are usually done on newsprint, so what can I do to make something that can be in an exhibition?

I enjoy drawing because in class I can concentrate on the moment; I know there are lots of catchy terms for this living in the moment state, but for me, it's not even consciously concentrating; if you can picture an old hag in rags and barefeet running as if in a trance in whatever environment, (i.e. not always in the woods alone,) that would describe how I feel in class. And gesture drawings best fits my state of mind, and that's what I'd like to show. 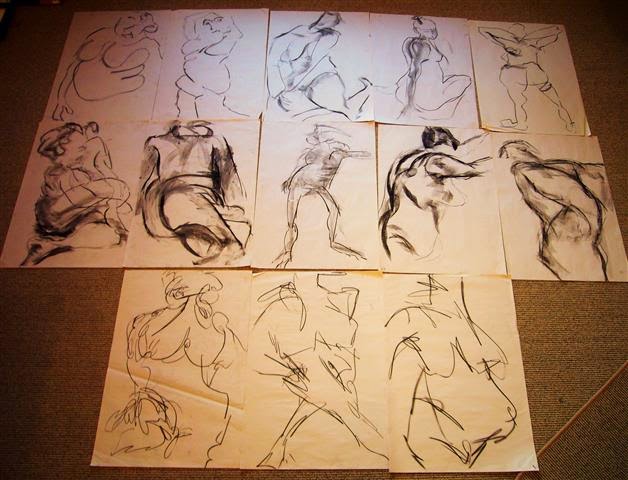 I've been thinking of how I could rework these gestures to make them a little more complete, (because for the time being, I feel I should,) and have been toying with these ideas.

* Incorporating collage - because I want biggish (A2) drawings in the exhibition, I needed some magazines with big pictures and I bought some old issues of the lovely Australian Donna Hay, but the photos of the fruits were smaller than I had remembered, or perhaps the photo policies changed over the years as these mags are over 10 years old, so I'm stuck. Each issue, though, has a color theme as well as food themes, so I just need to practice and experiment.

* Woven - I also went through all the collages I did in Clare Plug's class, because I so enjoyed it; her directions, and ergo the results, were simple, straight-forward, and therefore effective. I came up with the idea of drawing/painting two versions of one gesture and weaving them together. I've played mostly with watercolor because that is what we use in class for washes, but I find it a terribly difficult medium so I've not enjoyed the practice. Plus, if I go down this track, I will need something to paste the woven/combined drawings onto, even framing, so it's been in the Too Hard basket. However, the way I cut the drawings into strips could add an extra dimension in the gestures, which I like. 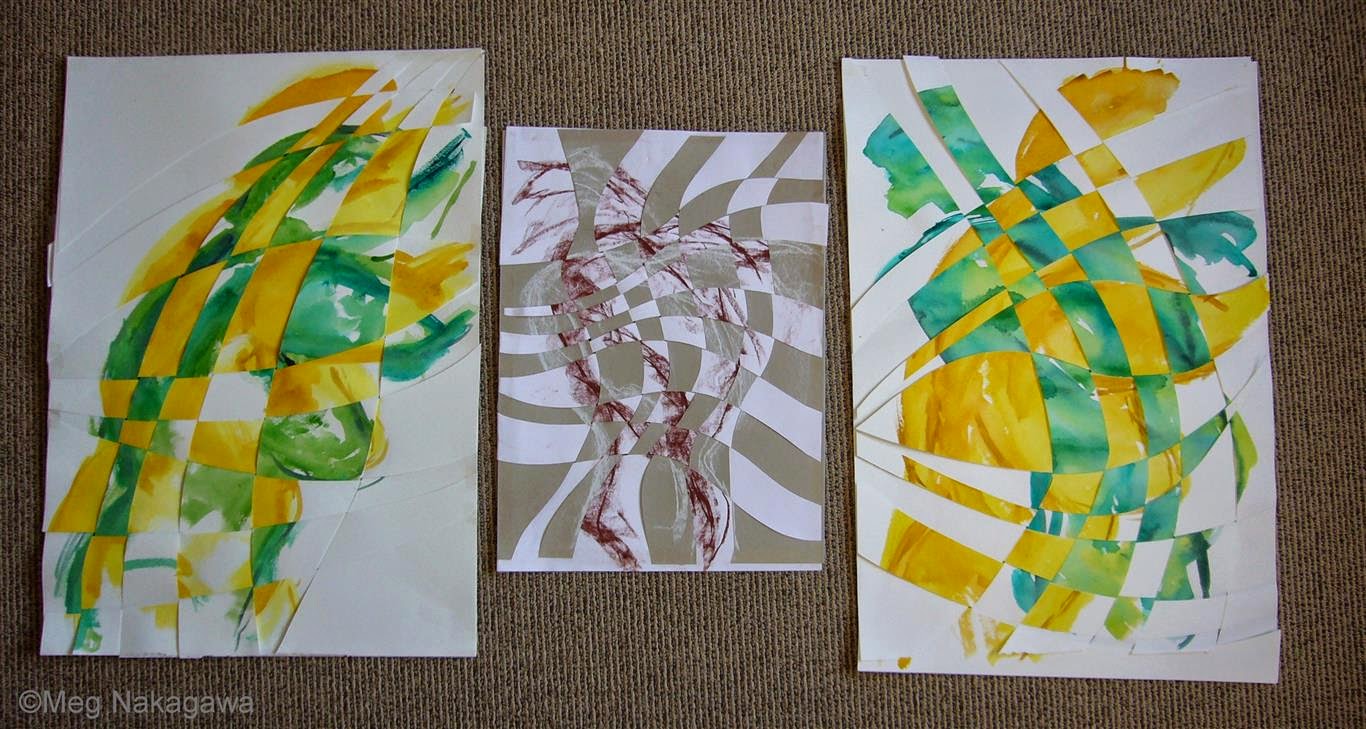 In the far right version, the figure is facing different directions.

* Old Age - I missed the last day of last term of the drawing class because I was sick. In bed, I started doodling how I feel about being sick and getting older and I kept returning to a few symbolic gestures. I've drawn many variations of these with pen since, but now I need to use other media, add wash, or mixing it up with collage. 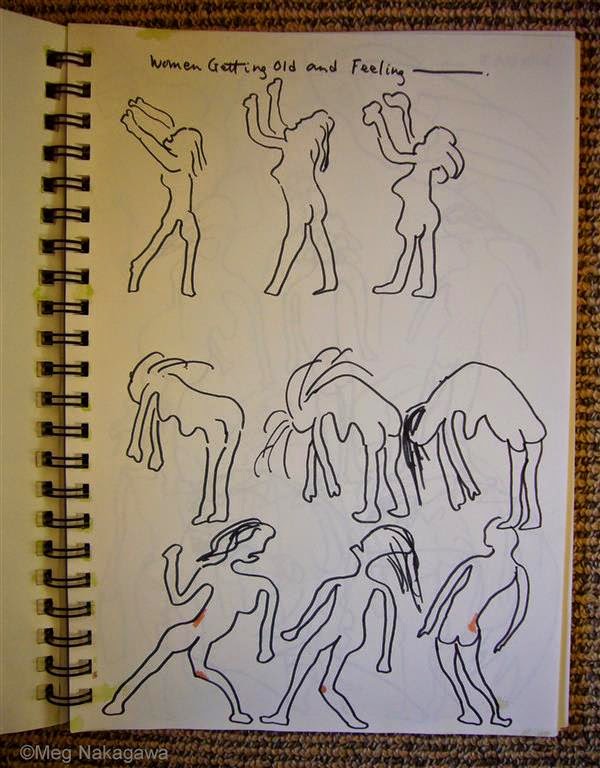 * Plastic tablecloths - earlier on, one among us expressed interest in printing on shower curtains, and another first on sandwiching drawings in something clear so it can be hung in the middle of the gallery and seen from back and front, then later on drawing directly on transparent material. I thought tracing my gesture drawings with fat magic markers onto clear plastic table cloths, (the kind that prevents spillage from getting to the cloth under the plastic?) might cast interesting shadows on the wall, and there is one perfect wall for it in the gallery, but it was someone else's idea so I'm not actively considering/experimenting at this stage.

I remain an enthusiastic amateur, so I don't worry about being good or being able to sell the pieces. By the same token, I think it's nice to put in a little thought into working and making pieces specially for the exhibition. The problem, then, is reworking gestures, without a model in front of me, and maintaining the immediacy inherent in gesture drawing, at least the way I understand it. Practicing at home has been ho-hum and best and frustrating at times. 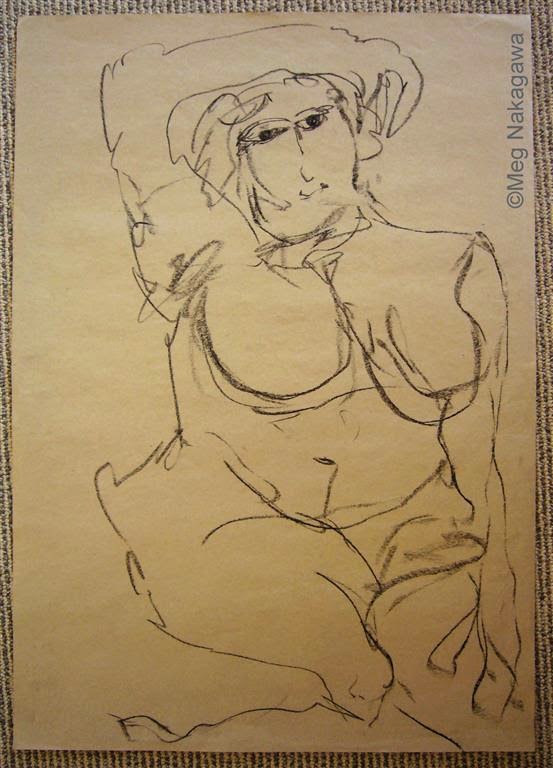 And why wouldn't I want to maintain it!

I'm not taking the class this term; I need to spend much more time on this than I had imagined.