Goodness Me, All the Noise! (Or Still In Between)

The last time I posted pictures of something woven, other than what I did in Kaz's class, was in May, but make no mistake I'm a weaver; contrary to some speculation, I'm not jumping ship to drawing/mixed media; they are my hobbies. (But you already knew this from the previous post which was supposed to come after this one, right?) I worked hard so far and have too much stash not to remain a weaver. Plus I luuuuuve weaving.

That said, I have been in such a limbo I'm sick of it.
* Between last September and April, after I came home from Japan I was doing alright mixing weeding, weaving and drawing. Even with the protracted problem with eyeglasses throughout January.
* March/April, my hip started hurting but I didn't connect it with many broken cashmere warp ends.  * Came May I decided to concentrate on the drawing (exhibition), which was hung in early July. I can't remember what I focused on during the three weeks the exhibition was up, but after it came down at the end of July, I prepared, de-prepared and re-prepared for the Australia trip.
* In August, I was in Australia for two fun weeks.
* For the remainder of August Ben was home and we had one of the coldest spell this winter and didn't do much.
* The first week of September I had a pretty bad case of common cold and spent four and a half days in bed.
* This brings us to this past; Monday - Thursday I weeded between two and five hours every day. I was too tired to do much else, except housework and some cooking. I did work on the postcards, and drew once. I ran errands in town yesterday.
* Next Wednesday marks one year since I've come home from Japan. It's important to me that I know I've done some things.

My right hip is not 100% and it got bad in Sydney, and then last Tuesday morning I woke up to it throbbing. I've been recommended a miracle osteopath but he's so popular my booking is at the end of October. I'm in pain only once in a while but I'd like this over with. Knowing the current many-grays warp is problematic and because I'm afraid of hurting myself again, I'm so reluctant to get back on the loom bench.

I feel compelled to finish the three mixed media pieces first so they don't hang over my head, but I don't have a dedicated space nor half the material I used in class. Seth continues to help me, but I can only get on limited, low-end media in town, which is fine as regards quality, but I get dissimilar and even shocking results so the "progress" has been between bumpy and stalled. I work on the postcards looking for a breakthrough, but it's not happening.

Luckily, I have reached that stage with mixed media where even though every new book, download or free online class promises to solve all my mixed media problems and then some, I know I have all I need to practice and make stuff, so I've been selective in my purchases. Like buying yarns to match to reduce stash.

I have lovely notebook-making and weaving ideas, but trying not to think about them (until I finish the uncompleted projects) has been like eating veggies before meat. Up to the point I went to Kaz's workshop I was focused on weaving so I thought I could handle a bit of fun mixed media, but they gave me so many ideas and I've been drowning in colors, textures and noise.

From time to time I am such an unsavory grumpy old hag, especially on the telephone, I even surprise myself. I've almost picked fights with two call centers in two days and I regurgitate the conversation over and over in my head, even though I know I'm no victim. Many shouty, fast-talking young people are doing their job, though they do shout and talk fast. To be sure, accents are not a problem for me. But when a cancelled appointment turns up at my door when I'm delirious from low-grade common cold fever, I ignore the gentle knocks and stomp around the house insulting call center staff. And my quick wrath surprises me; I've seen the same in Dad, wonder if we share a chemical problem, even.

I love living a weaving-focused life, and I don't like going into town unless I must, but when I am with humans other than Ben, sometimes I try too hard to fill the space with words, and I regret it almost immediately. Then, it's hard to like myself much. 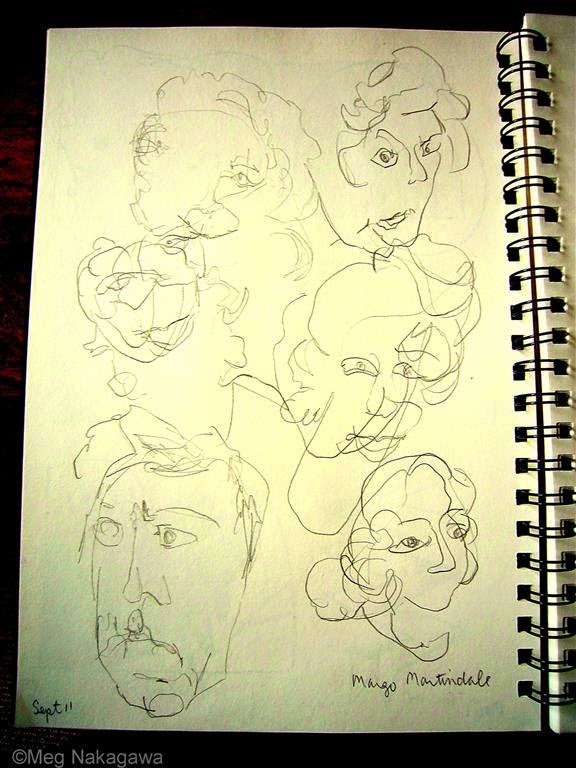 (Blind, quick contours from tiny pics on the Internet or the telly.)