See Them and Weep

I was going to work on another book this weekend and then have a hiatus from mixed media, but after some discussions with Seth, I decided not to continue at this point. It is ruining this book that really got me down.

This is from the third workshop, Cover to Cover. (See the first workshop description some ways down this link.) Mine is A5, no theme, no end product in mind, just making lovely looking panels; we prepared seven sheets, but I gave away two, had one backup so ended up with six. Some classmates went on to stamping and collating, but I had time for paint/glaze only. We are meant to make a hole in one "cover" panel and thread a ribbon/fabric though to tie all together, not bind. I'm not sure of the order/orientation I want, so this is one possibility. 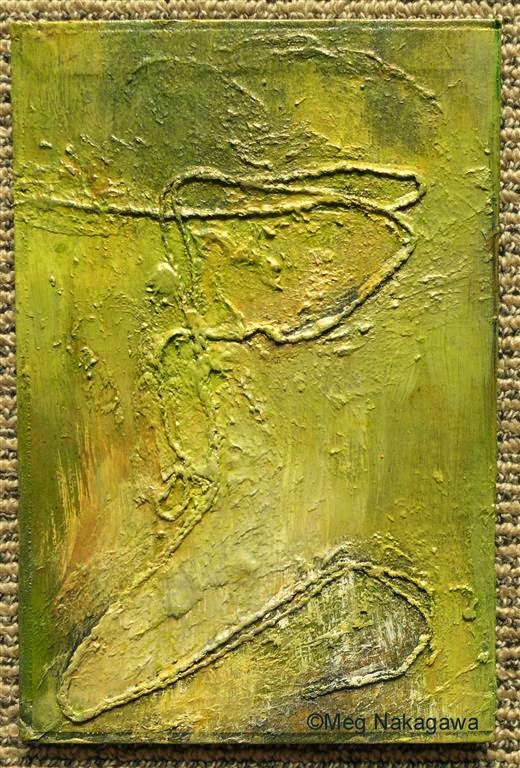 On one side of each sheet we were able to use fiber paste, with which we could create richer textures than with gesso only. Though I've dulled the sheen, saturation and texture of this page with cheap colors and over-glossing at home, you still get the gist. The line was created by gluing thrums. I wasn't pleased with some of the duller pages so I added collage which instantly cheered them up, but again I over-glazed. I rubbed paint straight out of the tubes on the left panel, but they dried too quickly and look not at all subtle. The right panel was the spare; it looked quite nice before I over-glazed. 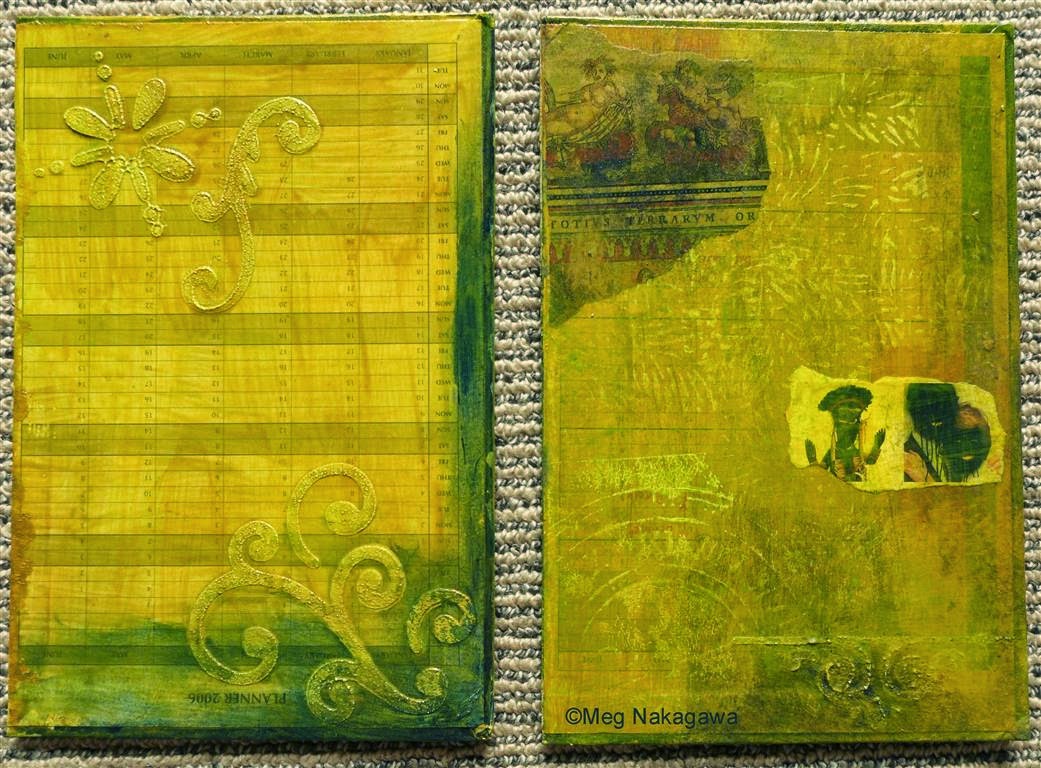 I have no idea what I want to do with the left panel. The right, again, I glazed too much, but at least I can still see the lovely stamped textures from the workshop, plus some I stenciled at home. 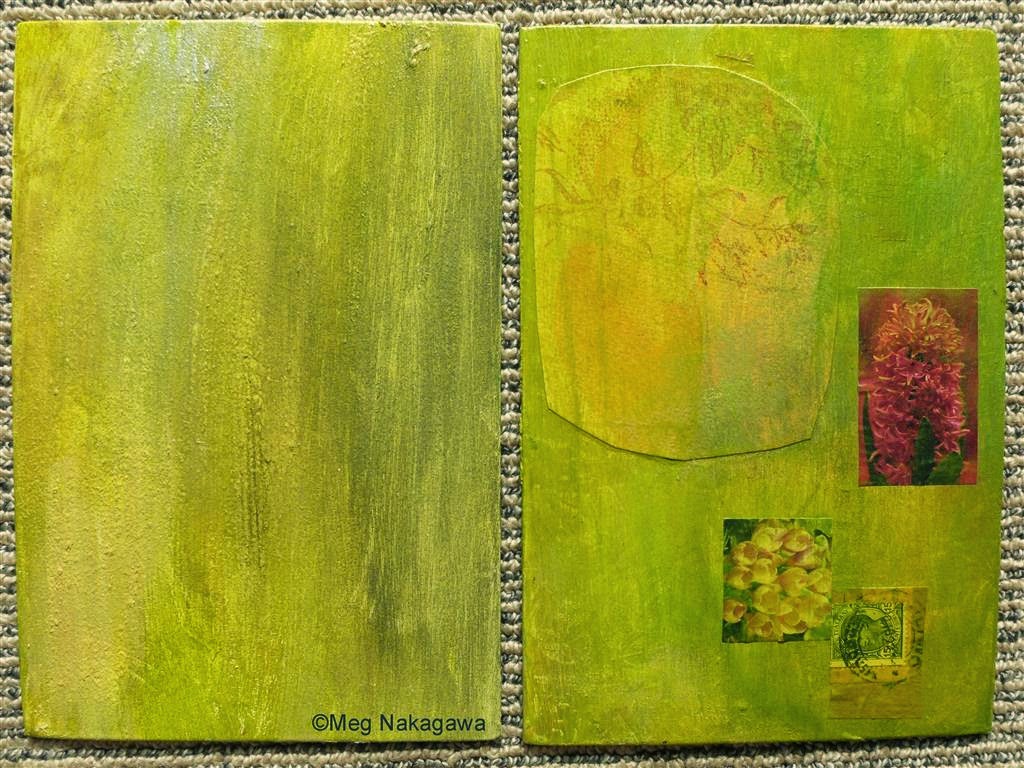 The left was tampered with but not too badly. I had intended to make these simpler pages more interesting but now I treasure the simplicity. The right panel has been worked on heavily, but I can still see the Orange woman's bottom. (She was one of many that didn't make it into the exhibition. I sprayed all watercolor work to use in collages but this is the only one I used. I still have some, and I like them in these projects.) 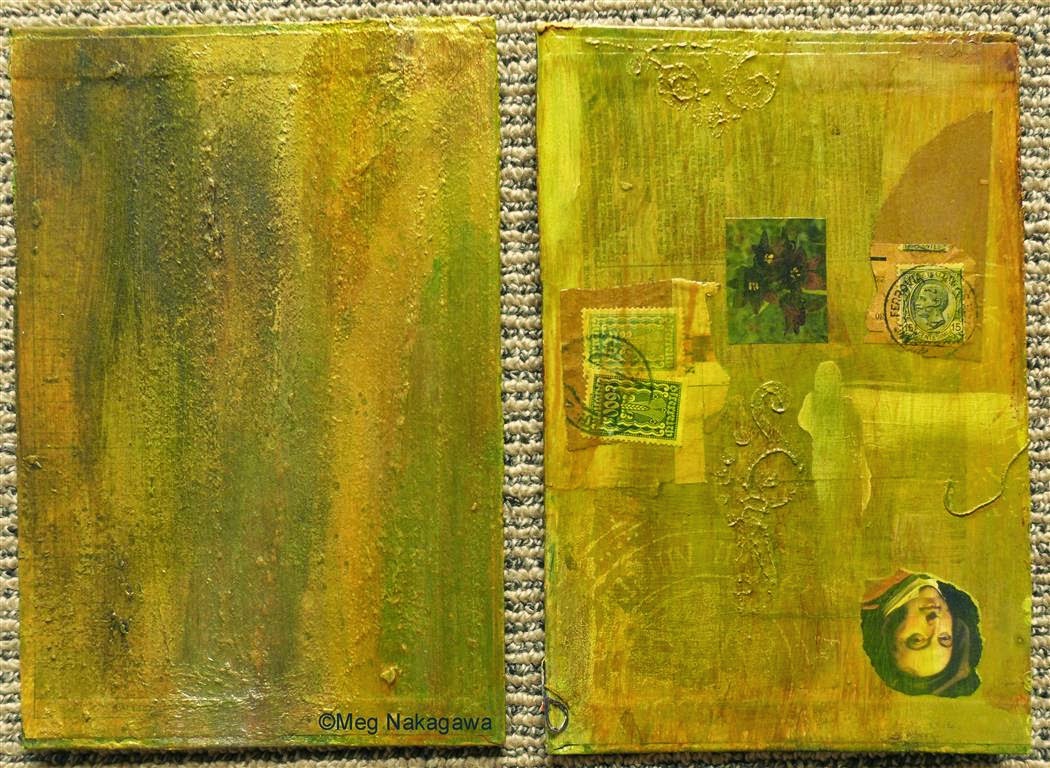 Again, I reduced the saturation on the left panel, but I'm not ruining it any more. The right, I'm flummoxed. I'd like to wipe away the brown/red paint when I next play with it.

And now, two panels that make me weep. 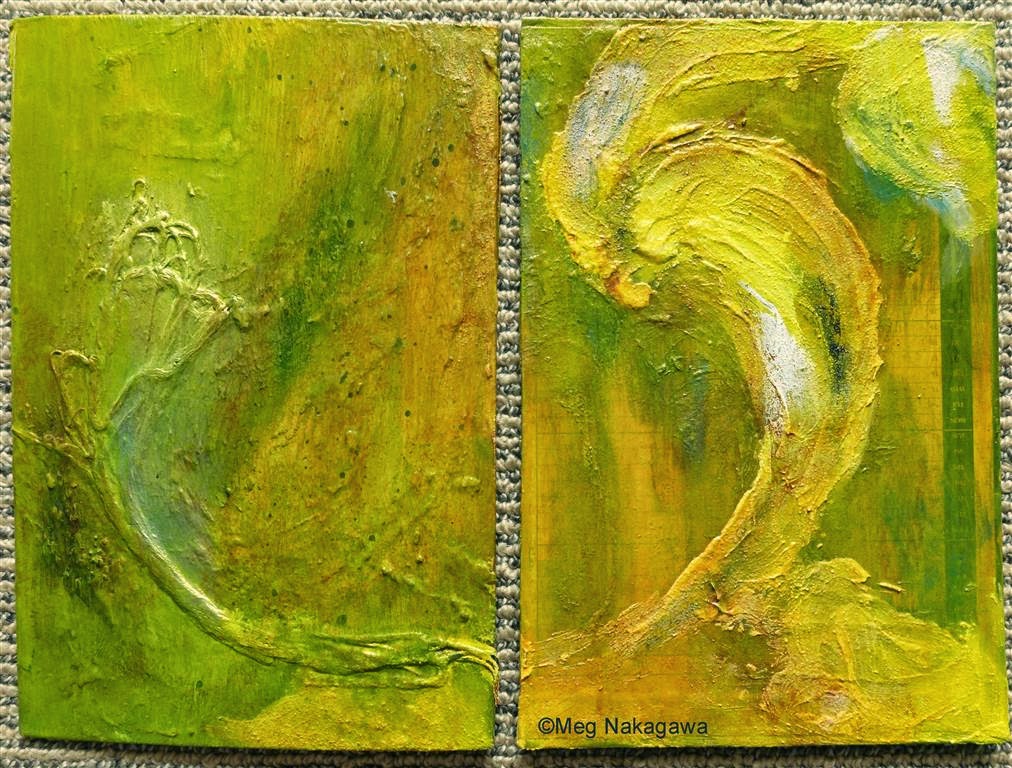 The right was the page I had tremendous difficulties with; I added depth with hues and values which worked well, but I did not know when to stop, (and isn't it strange when I know I've overdone it, I keep working instead of stopping immediately,) and again I over-glazed.The base shape was made with thrums.

And the page on the right. My favorite. Ex-favorite. I only wanted to enhance the depth a little so I worked and worked and worked until I totally ruined it. You can see a very early stage here, (ninth photo,) and an intermediate stage here. At home I mixed "grit" medium, gesso and molding medium to emulate the texture of the fiber paste, which while not identical to the texture of fiber paste, worked pretty well. You can see I finally walked away. Groan. 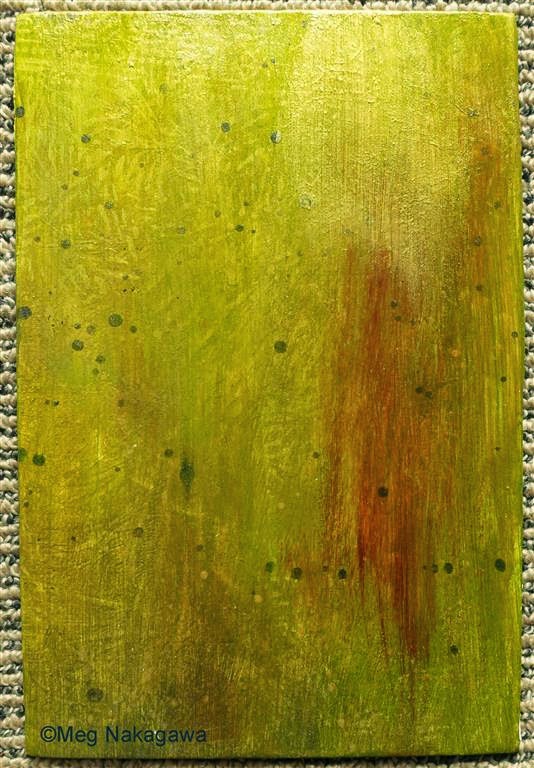 Yes, I glazed this page, and put tube paint by finger, but I can forgive myself for this one. I may try to remove some of the reds and some glaze later.

Why mixed media? There is so much depth in Seth's works no pic can do justice; some darker ones resemble looking into an abyss and lighter ones walking in fog or mist or under Japanese cherry trees in late March when the wind blows and I know it's the last day of cherry season for the year. I enjoy experimenting, in discovering how to work with cheap materials.

Since I became more entrenched in weaving I've warmed to abstract art, and what he calls background work also satisfies my need to create my version of play-abstract art; not "real" art, not "real" in the sense I'm not devoting my life to it, but intense playing. And it doesn't require drawing, which still doesn't come naturally. And it's so much fun.

Seth suggested, "Perhaps over thinking led you in a different direction than your instincts did [at the workshop]." My highest hurdle in life has been not to take things so seriously, but as we know, part of what others call "overthinking" is a weaver's perspective, too, isn't it? We need that analytical self to weave well. And when my pages start to look bad, I can't keep the weaver out. Also true the election and the media almost deleted the memories of Australia/workshops in a very short time and the dark, dark colors are how I feel now.

"My suggestions would be (not that you asked) for a bit more dark/light contrast and a bit more break-up of the color fields." Exactly as I thought, but the first was impossible with the cheap paints, ergo so much gesso, and the latter, my bad, I wrote in the previous post. "And you would be surprised what a little paint splattering can do!!!" Duly noted.

I am a weaver. I can say this with confidence so nowadays I don't say "no" often without trying things out first. But I'm still not completely "there" so I feel I have to defend myself; to redefine my parameters, to reorient myself. And it helps when higher power agrees.

"I think it is wise to 'step way from the pieces' for now. See what you think of them after some time away. You may surprise yourself -- or not." Thanks, Seth.