I've been going through the cyclical "Should I or shouldn't I (continue to blog)" thing, mainly because I've not had an interesting thought in a while, (more in the next post,) yet suspecting I'll continue one way or another because this is good therapy and the only way I will know in the future how I spent my life.

I knew I needed a week or two to recover from visitor-receiving and I had scheduled hibernation/regrouping, but it's taken me a bit longer. I had a day and a half of the old mild-to-moderate depression following three days of rational/considered diagnosis, when I was physically off-the-scale tired but not depressed, because I continued to plan my near-future projects and didn't have insomnia. Besides, I'd not had episodes since 2011-ish so I thought I was over and done with it.

I had other symptoms; any light was too bright, I startled even more easily at the slightest noise, I slept a lot, and I either had no appetite or binged on junk food. Came a week ago Wednesday, I think, when I lied down in front of the fire mid-morning and waited for time to pass.

I had a few good books and pretty magazines within reach and opened none.

Luckily it was gone by Thursday morning, so I've been back to my prematurely-aging-sloth self. It hasn't helped that the weather has been sucky; we've had a bit of rain where some days were as dark as early evenings inside; sunny-cold-and-windy ones when I dressed like the Good Year Blimp only to last half an hour outside; and a handful of perfect days when I happened to want to continue what I'd started the previous day, i.e. work, which I thought was sensible, all things considered. I haven't cooked well, I didn't think of collages, and wasn't going anywhere near drawing.

I was happy to discover work was the one thing I could stick with even if/when I'm in a bad shape; if this is my coping mechanism, bring it on.

What else. I thought about people and socializing with no conclusion nor new resolve.

I thought about aging, health and my weight, and have contemplated taking herbal pills to kick start but reached no conclusion; my gardening is no exercise, at least no cardio is involved, so I need to walk more.

I turned 57 eight weeks ago but I keep seeing myself as "almost 60", which in term invites aging-related woes, I suspect. I try not to listen so attentively to my mother's and her friends'/acquaintances' health problems but she is incessant and my body, not my head, appears to empathize/align with her. I remember coming home with new ailments after my trips to Japan.

Come to think of it, when she was pregnant with my brother and I was twelve, I had her symptoms for a month, though I couldn't tell anyone because it was a particularly busy period for my parents.  But what kind of a kid experiences phantom pregnancy at age 12, right?

I look at the mirror often enough, or so I thought, but it's when I see myself through Ben's eyes, or his photographs of me, that I'm truly taken aback and burst out laughing, although that's not his intent. This one's from last night; I call it, "A Whale Resting by Two Wool Swatches." Ben gave me a nice haircut today, though. 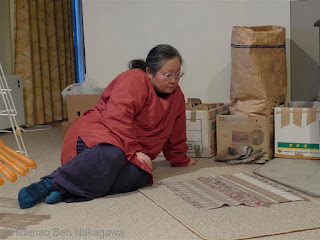 The garden continues to overwhelm me as I look for more permanent solutions. I learned from a BBC garden show the phrase, "controlled chaos"; I like this but don't know what it means in the garden and the examples they show are anything but chaotic. Cottage-y at best. Just not in straight lines.

In fact, I'm learning that optimal methods of propagation is different between the UK and Nelson; ours are more basic and easier. Which suits me. And then garden show hosts of course have multiple buildings, material and tools galore, which I don't want, and don't always need in Nelson, so I have to be selective in following advice. There hasn't been a good/permanent NZ garden shows for about a decade now, so I watch UK and Australian shows and go for the middle ground in terms of climate.

One disappointment I discovered only a month or two ago is that in Nelson we are not supposed to have negative spaces; every bit of ground needs to be planted to deprive the weeds of sun and space, or paved/concreted. Over time we've tried some expensive alternatives using newspapers, plastics, rocks/pebbles, tree barks and of course mulching in the past, but they don't stay in a good shape for long. Last weekend we ripped up one such small area to discard the plastic and Ben dug 50cm to get out convolvulus bulbs the size of a small child's head. The weeds went deeper, grew under the worked/covered area, and resurfaced 2 and 3 meters away, so we have to dig up a wide area next.