It's been an up-and-down week, but I managed some work. I didn't do it in good balance, (not much gardening in spite of three beautiful still, sunny but chilly days,) and I might regret having so many warps on so many looms at once. But I'll live. 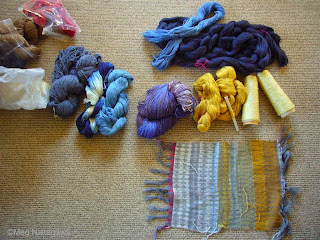 I made a warp with the navy version of the previous gray mill-end fine merino, and started wondering what silk to use in the weft. Mom wants an uplifting, light-colored piece; she wanted me to withdraw one of the grays from the Suter but I don't do that, and she's so not a gray person, and I so enjoyed weaving with this yarn, so I'm looking forward to this project. 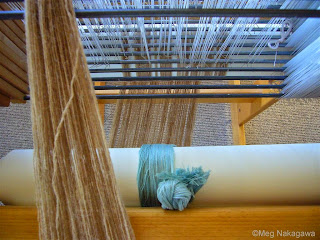 I made warp of cashmere mixed with a few other things, some of which I overdyed with walnut shells way back. It's on the 16-shaft Klick because one of the pieces is Mom's commission she wants it in a many-shaft weave, and I'm not putting another cashmere warp on the big loom in the foreseeable future. But even on this loom I'm not confident if this yarn can withstand all the ups and downs. I may come to regret this. I need to design a lovely curvy threading to be woven in a straight-forward, regular lift plan. Another piece will be a Thank You pressie. Unless I get so frustrated and cut it off. 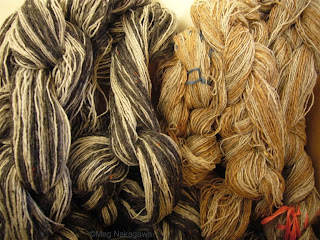 I made two warps with Mom's old wool; one in two grays, another in four browns, again some overdyed in walnut shells. I had in mind fabrics, but these wash up so deliciously I may make at least one shawl from each warp. Or two. 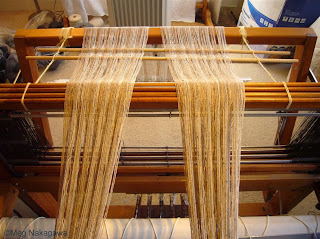 The brown warp is waiting to be threaded in Dornick; I have more of the two un-overdyed brown to go in the weft first; haven't thought beyond that. 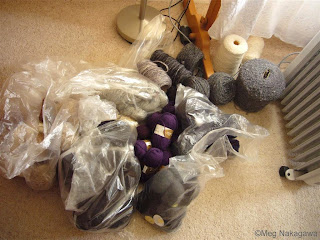 The two grays' weft candidates are waiting to be called up. 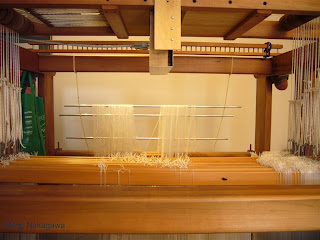 I recounted the number of merino/mohair warp ends. 520, not 500 as written down, which makes me wonder how many I have in the black version, which I made immediately before this, and for which I wrote down 500 also. I need to make a few drafts but they will be similar to or modified versions of what I used for the fine gray merino. Or not. 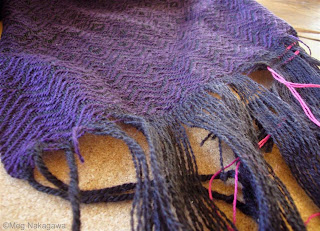 Some nights ago I fringed roughly 55% of this piece; I need to finish this before I forget how many times I twisted each way. 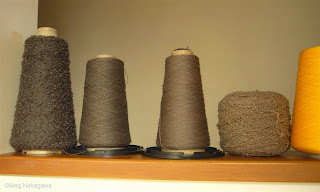