Joy Spilled Over to the Weekend 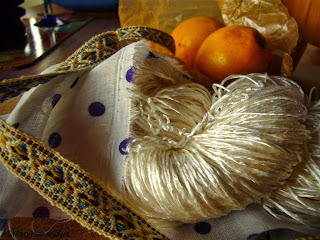 On Friday Maria brought me lemons from her tree and a skein of snow-white silk, wrapped in cute cloth and ribbon; she called my attention to the ribbon but I was so taken by the purple polka-dotted swatch I was speechless. Kath brought us bread to go with my bean soup and apricot squares but you are mistaken if you thought I'd take pictures of apricot squares before getting stuck into them, my dears. 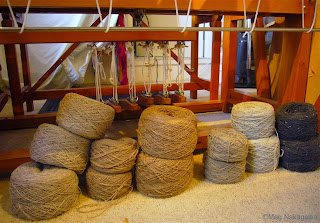 Having an ally like Maria makes me feel confident I will eventually be able to make use of any fabric I weave. Somehow. These are from Mom's stash and interesting in this instance she bought many colors of the same yarn which makes the stash easier for me to use. (She usually buys one skein or one skein each of a few colors.) They are old-fashioned, greasy, scaly wool. The four smaller balls I overdyed with walnuts years ago tell me the resultant cloth will full beautifully.

More stash-busting idea mixing/matching shades/fibers/styles. The four brown at the left, (I excluded the tiny dark brown,) will become another fabric warp. 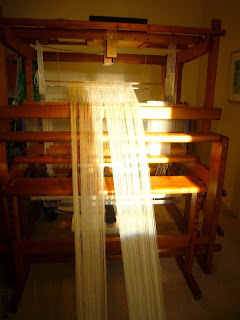 Weft candidates: possum/merino/silk in natural/brown, merino in variegated light blues, and a skinny (78/2 from memory) merino with a little bit of scale. I say a little bit because merino-with-scale as I know/learned fulls far more richly than this one, but it's still a lovely yearn.

I had a great idea for a fourth weft while winding on the warp, then the loom make a cracking sound halfway through, something you might expect if 100 warp ends broke at once. I couldn't find anything unusual with the loom nor a single broken warp, though, so I kept winding gingerly. I might be in for a rude surprise later.

I remembered the fourth candidate when I walked into the stash room but I haven't retrieved it. The stash room hasn't been put back in order and everything is still pushed against the dresser and, well, in chaos as far as accessing/retrieving goes. One reason I haven't remedied this is I have been wondering if/when I will go back to drawing/mixed media, and how much stuff, among them collage material, to keep. I won't ever stop playing with them, but I have accumulated a bit in the years I took drawing lessons, and I know that if I culled them the room would be roomier. Hummm...

Mom told me about a lecture series she found in her neighborhood; a young Japanese anthropologist/film-maker addressing belief systems in Bali. She was so excited and I was so envious I started watching BBC's Lost Kingdom of Central America and Lost Kingdom of South America, some of which were available on a NZ telly channel website. This is curious because Central and South Americas are the last big regions I've become interested in, largely because they never popped up in world history classes when I was a student in Japan, except the Incas, Mayas and the Spanish expansion. But textile-wise, I've been aware they are so important and fascinating.

In one of the episodes a scholar mentioned the iconography on a beer vessel; this one had on the outside motifs from an older, geographically-distant culture which initially developed and promoted beer, but the inside was decorated with motifs from the later, local makers'/users' culture.

And I've been dwelling on the idea of iconography.

And I've been trying to write a blog post on my Japanese blog on how to wet-finish cashmere and wool. Since Christmas.

And there are eight off-the-loom pieces at various stages of finishedness on the floor.