I've been gardening a lot, cooking a bit, reading while recuperating, and not weaving much. And I copied this line from the previous post, because that is what I have been doing. I'm glad to report my cooking is improving; learning is never straight-forward for me and practicing is the best way to improve any skills, not reading endlessly about them; I think I've learned that from weaving. I noticed of late I've been able to emulate Ben's cooking a little bit "ending up with" a mixture of flavors rather than one or two ingredients dominating, but without making it all too complicated and mismashy.

It's been a while since I last read a van Gogh book but I've been reading online about his contemporaries, (some are a little earlier): Manet, Degas, (apparently another difficult person,) Cezanne, (ditto), Renoir, Pissarro, Seurat, Toulouse-Lautrec, et al, and who were chummy with whom. On paper, I've been having a ball with Sarah Vowell's refreshing look at American history, and David Rakoff's musings on life as an expat and on modern life.

On another level, I've been envying their uber-cosmopolitan, cerebral, (and surprisingly more mobile,) life, the kind I aspired to when younger, the kind of life someone from Tokyo/Yokohama naturally imagines rather than an almost-rural suburban life in Nelson. I'm happy living this life here now, but I also wonder what I might have missed out on in terms of learning, and culture. Thank goodness for the Internet, then.

A while back I finished weaving the first cashmere mix piece and washed it, but to my dismay it was nowhere near as fluffy as the sample. I felt so disappointed after glaring at it for a week I did a second wet-finishing, which didn't improve the piece at all. I have started a second piece, a commission from Mom, using 100% cashmeres slightly skinnier than the sample, and to be on the safe side, I've increased the PPI. 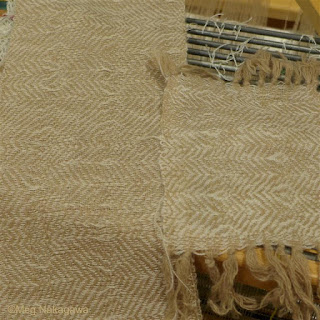 Middle third of the sample is with the same merino weft. 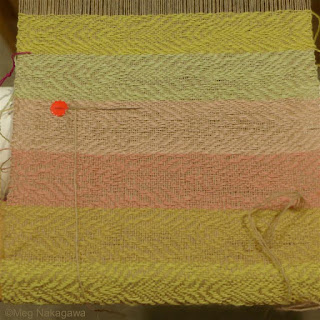 I've become philosophical. Our place won't look like we've been putting in efforts for at least another couple of winters. At the earliest. In four of the main parts we do put efforts in. I learned to be patient from weaving. And the garden is never ending. Now the spring wind has come, and I had a bad start to the hay fever season, (it's settled now,) I'm at the mercy of forces greater than myself on when and how long I can get out. We're expecting a La-Nina-cool/dry summer, so like last year it may blow until early winter, with blinding sunshine in between. Still, I was getting tired of the garden claiming so much of my time, energy and brain juice, I couldn't think of weaving when I've had half and whole days I sat on the couch unable to switch my thinking, so this can only be a good thing.

On the more cheerful note, here are some early-to-mid spring pics. 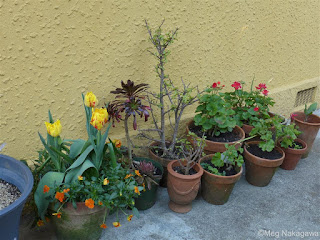 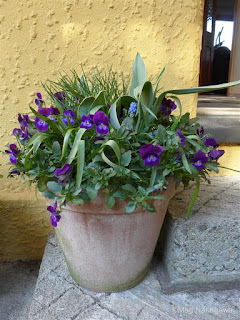 Had I stuck to my original color plans of almost 19 years ago, our entire garden, or at least a big part, would have been in purples and blues with enduring calm. 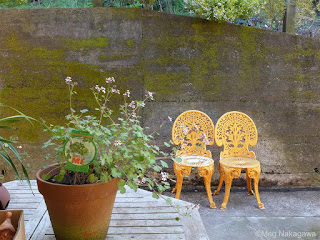 Said retaining wall, which has been treated twice, plus the only scented geranium that smells really lovely. The house will be washed by a professional and the exterior paint touched up by his mate, so our house will look pretty for the first time in several years. Or a decade. Maybe I can persuade Ben to help me spruce up the garden furniture, too. 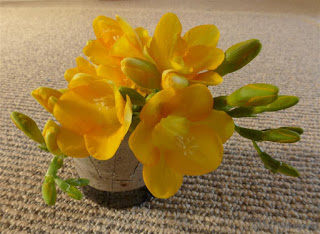 Because of the wind, I've been bringing in flowers more than other years. 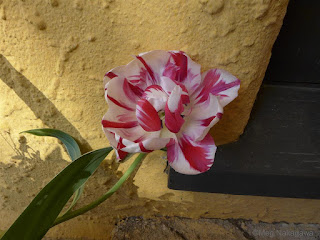 Not only have I bought not-blues and not-purples, but this year I even bought variegated. 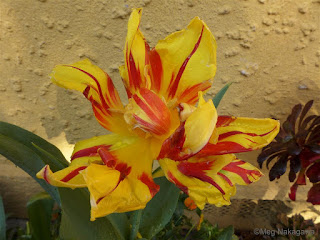 I love tulips at every stage. 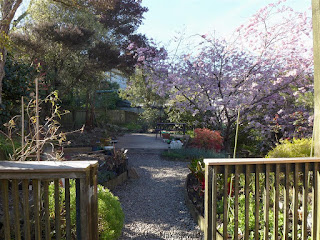 One of the eight areas in our garden, and probably the area that should be the prettiest, but it's mostly veggies and here as it's the only flat bit. It's much smaller than it appears in the pic. Seedlings waiting on the deck.