Mom rang twice yesterday; said she might ring me again before I leave. She had updates on "the group exhibition"; yay, she's beginning to own it, which is great. She's working on her blurb, too; said she had to because I'm so scary. 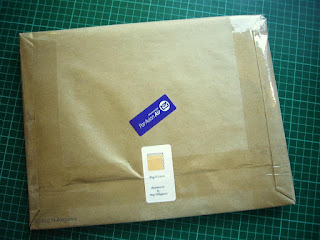 "Aha Aha" is going to Australia in this most humble fashion. I need to keep looking into available/affordable packaging, what I think my "brand" requires, and how far I'm willing to go without maiming my environmental commitments. I'm going to look around in Japan, the Land of Excess packaging, too, because there must be some companies doing beautiful and environmentally sane packaging, but for the most part, over-the-top naughty.

Worst case scenario, a piece of cake can: 1) be wrapped in individual plastic/paper bag, so it doesn't dry up; 2) be accompanied by its own small eating utensil in a plastic/paper envelope; 3) then sit in a plastic tray or between cardboard divider so they don't bump against each other; 4) these trays/dividers can go into an additional clear plastic bag; 5) which goes in a cardboard/wooden box or a decorative tin; 6) sometimes with bubble wraps in the top and bottom; 7) then there might be beautiful paper decorating the lid, or around the entire box; 8) some with bows, stickers or decorative strings; 9) and finally they go into a plastic shopping bag or the store paper bag with handles. You should see the look I get when I decline final bag! And sometimes the dividers don't work so all the content, (often with rice crackers) sink to the bottom anyway and get broken up. Idiotic.

And here's me handing presents unrapped.

I packed Ben's new suitcase because it has bigger wheels so even when a short person pulls the case, the front/bottom of the case won't drag. We've had this old, black, very simple case forever and I didn't realize how much I "knew" the space inside, so packing it was a cinch, but that one has only one setting for the handle and the wheels are worn. And now that it's packed, weighing in at around 17kg, sitting just inside the front door, I can't help thinking I packed too many changes of clothes and small gifts, so I know I'm going to open it up a couple of more times.

We're going to have light supper with JB and A 12 hours before I'm expected at the airport. Often during summer flights are timed so we don't have to overnight in Auckland, but it means early morning departure, and this time they want me an hour before departure, (it used to be shorter, I swear,) it's 5.40AM for me. That's usually when I'm trying desperately to grab a couple of night's sleep after a bad insomnia night!

That early we can get to the airport in a little over 5 minutes, so I could check in, come home and have breakfast, if not a shower, and head back out, but we'll most probably settle for those unconformable, restless coffee and a bite at the airport. If their cafe is even open.

I don't mind overnight if Ben's travelling also. Our regular hotel has a great restaurant, and interesting African artwork, the original owners were from South Africa, but last time Mom got locked inside the bathroom due to a faulty door knob, which had clearly been tampered by the previous person locked in there, so not sure if we'll ever go back there. The worst part was multiple staff were so nonchalant!

Jade's online party is wrapping up. I knew Jade, from our short encounters at the mixed media workshops in 2014 and our occasional "conversations" since, to be a calm, focused and intelligent person, but I was really impressed how much all of these she was.

Prior to the do, I thought I was well equipped to handle any New Age/Self Help talk. Boy, was I wrong! They spoke in tongue, flinging new -ologies, concepts, book titles and authors I had never heard of; I was never sure if a given acronym was standard text-talk or an inside code. Everybody seemed genuine, but repeatedly confessing to being "true scanners" their mantra, (people whose interest jump from one thing to another, apparently serially or simultaneously,) this one-track mind enjoyed being the outsider and people-watching.

I wrote in my feedback: "I found I like my life where it is now, I didn't have a wish other than for this life to continue; sure, more money would make things easier, but we're not lacking in anything severely. I guess I'm patting myself on the back for getting here since I started this phase with The Artist's Way in 2002. And in retrospect, [the transition] wasn't a big deal, and it didn't take that long. That's what I got out of this week. And I like being one-track-minded."

I wanted to add, "I'm also grateful to and for my soul mate," but since bad relationships were some members' problems, I didn't want to rub it in.

I noticed there were many women in our 50's and 60's; of course it depends on the environment in which we grew up, but we came at the tail end of, "girls get married and have kids; if you must, you can be a teacher, a nurse, or a secretary;" may have fought for women's lib, and may have had to convince skeptical daughters of the same. But then we saw the demise of lifetime employment and the smudges on the glass ceiling, then to be hit by the latest hideous iteration of misogyny. While no doubt feminism and bad economy would have been just as unfathomable for men, gee, no wonder women need to get together and rant as well as learn and help and readjust.

Another observation was technology. These folks knew a lot of different platforms/portals/websites. Still others thought getting up a (static) website or a blog was the answer; I don't agree with website as prerequisite unless it's includes a blog, and I'm not sure what the future of blogs looks like. I helped one person create an FB page, (he already had a profile,) and we discussed the unpredictability of anything online, lifespan or security. Even as worked, he could not see some things on his page on his phone while I looked on my laptop.

I'm happy with my laptop, camera, and no-camera cell phone for now; my blog, Facebook profile, and Flickr, although Flickr may go and/or MegWeaves FB page be resurrect in conjunction with the Pop Up Shop. (A shell is there because I needed screen shots.) I'm happy to stay ignorant of the newest and shiniest and focus on weaving until, oh, half a dozen of you start singing praises of something in unison. But I think I have to recess pros/cons of technology in shorter intervals.

Now I'm going to mention one last thing potentially offensive to everybody. When we came to New Zealand, I couldn't believe how somber Kiwis were in the face of grave exhalation; with the possible exception of All Blacks victories, Kiwis are a subdued lot. Although if you listen carefully, there is much witty joviality happening. We had to learn to clap sitting down at concerts, or worse, rush to the door for what reason we weren't sure. 20 years on, at the Mixed Media workshop, I couldn't believe how Aussies got right into the spirit of American-style Rah Rah cheers. I cornered a Kiwi who's lived in Sydney for some years, and she confirmed Aussies can be the way I used to be.

I guestimate a little short of one-third of the most active participants at Jade's do lived in Australia, one-third in Europe, and over one-third in the USA. And much Kumbaya was had by all.
Posted by Meg at 2/08/2016 04:45:00 PM