It's been so hot, the last coupe of months feel like one long haze. We had interminable hot/dry days, several not-as-hot-but-humid ones, then one slightly-overcast-but-not-so-hot day, and we're back to scorching 29C. It's funny how temperature is relative. I couldn't tell which was worse, 28/29C and dry with itchy skin, or 26C and humid with vertigo and headache.

Usually in Nelson evenings are cooler, so much so we rarely keep our windows open overnight and some nights you do need your trusty electric blankets or extra covers, but this year the bedroom windows were shut once at around 4am this side of.... oh.... late Nov/early Dec. It's noisier but cannot be helped.

Although a few days later than planned, I finished fringing/hemming/washing/pressing/labeling all woven pieces, so I have a clean slate to start weaving when I get back; if/when I want to do another Pop Up, I need to do only the photos and write up, so slightly more prep done than the last time. It's really felt like Lent, weaving in the basement would have been lovely, though even the basement hasn't been as nice as usual. My plan was to then garden because there are gazillion things I sincerely want to do before I go, but if I can't do them, so be it; I am not risking heatstroke like last year.

Yesterday may have been the only day to venture outside, it was overcast and cooler, but I baked a loaf of bread, a cake, a batch of biscotti, made a second batch of pasta sauce, and made two lasagna, (lesagne?) sans pasta, with slices of egg plant, some of which I did to ease Ben's cooking load while I'm away, though he keeps telling me not to worry, him being the better and faster cook, but I kind of wanted to put my stamp as the female/wife of the pair. Can you tell I had saved up all the oven stuff for a cooler day?

At least Kiwis are loving the hot. They call 30C "warm". Some are doing that delirious eye/bending one knee thing when they say, "long, hot summer," so as an immigrant, I shall not complain. Too loudly. In front of them.

Mom finally got started on blurb-writing, and we talked discussed it during our weekly Skype. I feel I've been saying the same thing for months; it seems she finally understands it every time I explain and then forgets; and sometimes I get a headache-y kind of déjà vu because I don't want to repeat if she remembers, but I'm counting on her forgetting again and I repeat the same stuff. But we narrowed down the focus of artist statement to two good points so I think she's good to go, and get help from my sister or her friends in polishing them. It's crucial she gets this done because attractive blurbs in Japanese is something I can't help her with.

Then she wants to distribute invites Monday morning after I arrive Thursday night, allowing me two days to take pics, buy ink and cards, set up the printer not in use since I was last in Japan, and make up the invites. That's assuming Mom's got details of the gallery including a map. I'm pretty confident I can count on her with this, although... I've asked for these some months ago, and she told me she just threw out a mailer from the gallery. Mother, if you're reading this, please get and save the info!

[EDIT: I'm used to needing two days to get home, but this time I get home on the day I depart, late on Wednesday. I have four days to make the invites, so, yeah, doable! Even if I arrived late Thursday, that still would have been three days. Ah, heck.]

Goodness, I'm a good daughter. And if you thought I'm being grumpy about Mom's exhibition, not so; I'm getting totally excited to the point I decided not to worry if I'm bullying her. (Ben, not so much; I hate it when he misses me while I'm still here.)

I've got three days left, and I need to pack, give Ben a haircut/beard trimming, see if we can meet up with JB and A for supper in town, think seriously if I need more Yen in cash and get some if so, and clean the house with Ben tomorrow morning. 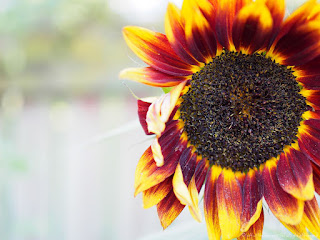 I planted these, Ben took this. The package showed redder ones like we had four years ago, but these are taller and more brown and yellow than red. But what better in the scorching heat, right?

EDIT: Mom rang Sunday. She went to the gallery again, got the details and map, and did another check on the venue, which turned out not to be as tiny as she thought and has few fixture which could hold dowels or coat hangers. And she's been working on her blurbs. Well done, Mom!!
Posted by Meg at 2/06/2016 07:34:00 PM