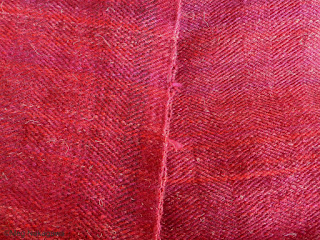 The cloth warp, after a reprieve, (more later,) was threaded in Dornick since there were already enough color interest in both the warp and the weft. To employ more interesting threading would probably not have added interest. Plus I opted for simple treadling for speed. (The colors are much more saturated, in dark pink with parts of deep reds and lighter pinks.)

It was harder to decide the sett. I sleyed the sample at 16PPI instead of 18PPI, the reason being 26/2 warps at 18EPI using 26/2 wefts in the past created tight enough cloth; combined with much thicker wefts I worried the wet finish would stiffen the cloth too much. Sampling showed 16EPI was comfortably cushy but compacted enough a good sewer could cut/sew without too much problem. After nearly a fortnight of indecision, I decided to go with my gut feeling and went ahead with 16EPI. I also wove with the end-feed shuttle, as it was the fastest while sampling, and didn't seem too heavy for the spaced-out cashmere warp.

I discovered the darkest cashmere on the far right, (seen at the far left in the picture because I shot the colors from the back of the loom,) stretched more than others, crating that horrible fan shape at the right selvedge. I tried all the tricks in my book but I couldn't fix it, so after about 170cm I cut off the cloth, and started another piece, hoping a little loosening/tugging of the warp and a lot of hoping would fix the problem. I also switched to the smaller boat shuttle as this allowed me to manipulate the weft, (yikes!) more easily. I also wove much slower and beat deliberately, but while weaving I had similar problems. I got about 150cm of the second piece.

When I took the second piece off the loom, I was shocked how visible the difference in the beat was. Before wet-finishing either, the first piece feels like a stiffish wool that could go either way, (but I know the sample is deliciously cushy,) but the second feels like, oh, colorful/uplifting South American rugs sure to last for years but uncomfortable as a garment. Meanwhile, the right selvedge on the first piece looks slightly wavy, while on the second scallopped but not enough to for me to get so bent out of shape, because these are fabric meant for sewing, and the selvedge not intended to be used as a feature. I'm going to leave these for a while before wet-finishing, hoping the temperature/air/moisture might by some miracle make the two pieces more like each other. (See the manga-esque stars in my eyes?)

I'm so into fabric-making now, though; I'll revisit this sooner than I had imagined.

The above reprieve was caused by an occasional problem I've had with my hands. I don't use gloves when I wash dishes, and though I'm not sure if this is the cause, occasionally but for years I had big pieces of skin, (the size of the nail on my pinkie?) peel off of my left thumb, and then sometimes my left index finger; I usually used general-purpose ointments, which resulted in lukewarm results.

In the last little while, it spread to most of my fingers, and where the skin peeled off, the next layer throbbed with heat-sensitivity. About six weeks ago it got so bad the throbbing kept me awake, so I applied and used up my manuka honey cream, and moved on to Australian papaya cream; both worked to stop the peeling and settle the sensitivity but I had to apply them all the time and or the throbbing came back in half a day. I spoke to a pharmacist who said if the manuka et al are working to stick with them a while longer, but if I were too bothered had other reasons to see a doctor, ask, and I'll most probably be prescribed steroids. Yikes.

A week later, I had a GP appointment; my regular GP was busy so I had to see a new doctor, who dismissed natural remedies instantly and didn't tell me what this was or what caused it, but who promptly prescribed a watery "scalp solution", to be applied twice daily. Instantly the steroid gave me a horrible taste in my mouth but I was in a hurry to get back to work so I grinned and bore it for two days, when I noticed the peeling had returned. So I quit that and returned to the papaya cream, and the peeling and throbbing have gone. I'm not sure if four or five doses of the steroid worked or the manuka/papaya were on their way to healing, but it went away suddenly as if I had imagined the whole thing.

I also bought a pair of kitchen gloves which I try to remember to use, and I let dishes pile and and wash only once a day. I'm also trying all the eco-focused dish detergents I can get my hands on, and I use hand creams more often than before, but so far so good.

While my hands were peeling and catching yarns, I had to stop weaving, stop making the gray warp halfway through, (my big project I should have been working on as soon as I got back from Japan,) but that's now the warp is made.

On my way home from the GP, I got some needlepoint yarn, and for the first time in 26 years I've started a wee project. I've been thinking needlepoint and embroidery recently, the freedom to design as I work. While I do both pre-designed and spontaneous embroidery, I never plan needlepoint designs. Shortly after I went to the US for high school I learned to needlepoint from a woman who designed and painted canvases for a craft shop, so from the get go, needlepoint was something I, too, made up. 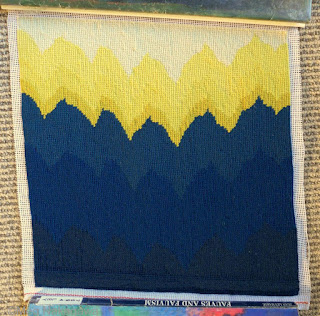 Three navies, three yellows and this curious clay color, intended perhaps for one side of a bag. Because I usually use only the bottom-left to top-right stitch, whatever I make "leans" so just now it's pinned to the ironing board like Gulliver in Lilliput. It had been a while, however, since I last came home, got the material out of the bag, and got working right away. The continuous thinking of where I'm going next was lovely. This first piece, the design decided where I'll go too early, so I want to do more fluid pieces. The spontaneity doesn't compare with my kind of weaving, but needlepoint is done on a grid, and this is slower than working with paint and paper, and re-doable. All in all I found needlepoint a perfect kind of leisurely, drawn-out exercise in contemplating colors and shapes. And how it makes me think in different directions, on the loom and with paper. (The working on the canvas itself took longer than I imagined because of my declining eyesight. Multifoculs just don't work well, eh.)

The bottom horizontal stripe is in the same navy as the bottom layer of "hills"; since it'd been so long since the last time, I wanted to remember how needlepoint worked. From memory, I used to use three strands of softer two-ply wool, while these DMC yarns, the only ones I have access to now, are denser and slightly too fat for the size of the canvas holes. With the softer/airier wool, I remember manipulating the finished stitches to more or less blend enough not to distract from the design, but with these, I didn't even try. 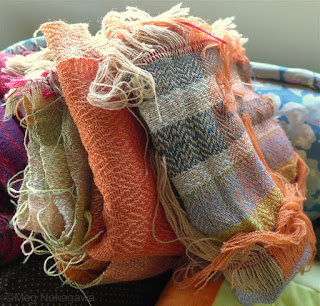 Meanwhile these got neglected too log, so maybe needlepoint only as a reward after fringing/finishing? But it's nice to have something I can do on the couch on winter evenings.