This is how Kiwi sports people used to start their interviews, unfailingly, as if everybody received media training from the same guy. Or girl. It's become the standard opener for Kiwis between 13 and 48, up to 58.

I had a slow week, followed by a very slow Easter break, (when we both read a lot and slept even more, even though we both silently aspired to garden some of the time.) The weather has been changeable and our old bodies can adjust only slowly. I understand everything Mom says about her being 85; we will never be as fit as we are today. Luckily, nothing is conspicuously wrong with either of us, except my weight, but the old bodies take forever to adjust/readjust, or just won't, and it is a gradual downward slope.

But then I had a productive few days and wove three pieces and made three warps in quick succession. Or, I unpicked heck of a lot, and still can't guesstimate how much yarn I've got. Or, I'm becoming even better at adapting to situations. 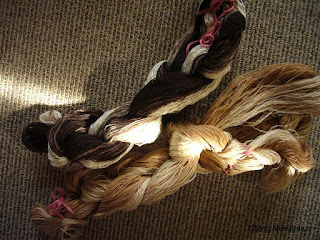 Two brown-ish cashmere warps were made from those little bits left on cones or wound into tiny balls to get rid of those cones. They are both short warps and although I'm not a brown, (nor green,) person, I like the look of both. These, I designed on my feet. The undyed is Mom-spun. 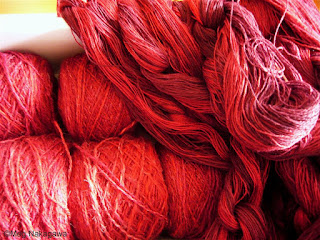 Because Mom currently has access to at least two people who can sew handwoven fabric into garments, I made a burgundy warp using Mom's cashmere to weave fabric using her handspun, (and possibly hand-dyed) wool for her. The cones looked new, so I just made up a color scheme and went my merry way until I ran out of not one but two colors suddenly, and another eventually. Luckily I had a very small cone of my best merino very similar to one of the reds, so I mixed that towards the end. I have no idea how the fabric will full, and the fabric is 80% the width of the plan, but I'm hoping it'll turn out almost-to-moderately OK to be cut and sewn by a capable person. (The colors are slightly darker and a little more saturated.) 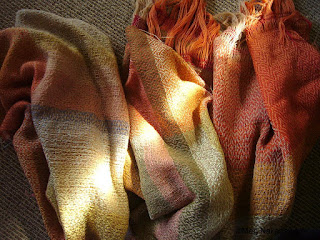 And then weaving. I wove the second (left) and the third (right) pieces as planned, except the third pattern was impossible to see while weaving, showing me a glaring mistake about 80-120 picks later so I duly unpicked/rewove. The color scheme I planned for the this piece was supposed to give me roughly 178cm in length, but ended up short of 160cm so I added another repeat, finished it off, and started weaving up the warp-end fabric without cutting the piece off. Except... you know these things, don't you, no matter how you try to justify it. The first two pieces were around 180cm long and there were plenty of warp left. So, yes, the next morning I unpicked 200-odd picks of the fabric, and the plain weave at the start of the fabric, in between, and the end of the third piece, and added three more repeats. But it looks the most harmonious in the series. The second piece suffered because I forgot to wrap the cloth beam and the strings tying the apron to the stick on which the warps are tied with bubble wrap or at least a few thick sheets of paper as I normally do. Instead I had only one calendar page, so the irregular beating took on an apocalyptic uniqueness. (Of course I'm not posting the worst of it.) Much mending/giggling coming up. 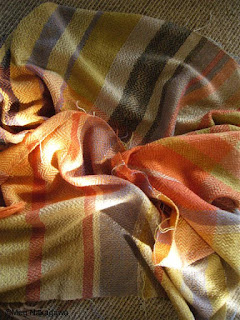 I also knew there was quite a lot of left, so instead of "using up" disparate wefts and make lots of tiny swatches, I started weaving as if I had enough for a fourth piece. This way, I could either get a nice fabric swatch or two, or make myself a neck tube, or get a proper piece. I looked at cashmere already on bobbins from the first three pieces, augmented/edited, and decided on "summer beach" colors, which morphed into "a riot of soft colors", but ended up more appropriately "post-storm beach debris". I got a full-length piece, but I'm ambivalent; as a consumer I like harmonious color schemes especially those close to each other on the color wheel; as a weaver I like them, and very saturated colors; and this piece is neither, as if I repeatedly and deliberately disrupted what could have been harmonious. Although... it looks less bad this morning.

All in all I worked against my initial intentions to try to make cool grown-up pieces with this warp. Ugh.

Never mind. What do I know about good taste. While I was away two of my favorite gray pieces were sold; "Celebration" (the second piece,) is the only one still waiting for its human and I was so sure that would leave the gallery first and by a long shot. 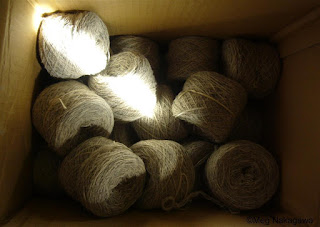