So they finally came; their trip has been in the making since 2007 (?), but like many of us, they spent a decade caring for parents but finally my Philosophy Professor from college and the fab Mrs visited Nelson this week. I thought I last saw him in late '81 but he reminded me I visited him in '85 when I was last in Minnesota; I met the fab Mrs only once in Sept/Oct '77 at their house with a bunch of other Intro to Phil kids, but the fabulousness of the Mrs was, instantly we felt we knew her at least as well as the Professor. We had dinner on Monday in Mapua; a wee tour of town on Tuesday; much walking on Abel Tasman in the scorching sun and searing heat on Wednesday, (yes, it was outdoors;) and another tour of the region culminating in a wee picnic, us eating while standing in the cool wind, on Rabbit Island on Friday. Not many students have a chance to give a fraction of the gift back to their teachers, and we enjoyed their company way more, but here we are. 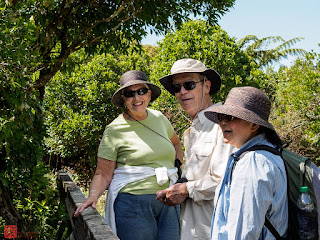 Abel Tasman National Park; I had a hard time keeping up with their pace. 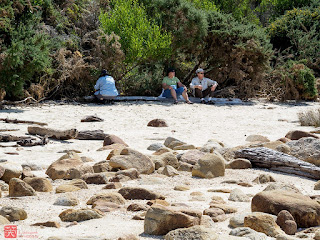 A named beach on the walking track, (don't remember which,) sitting on a driftwood, having a snack. Oh, dear, where is the evidence of my recent weight loss? "The road IS long... With many a winding turn..." 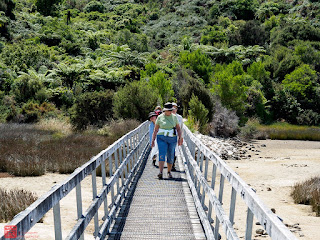 I wore clothes, under the blue shirt, which my niece, then six, told me I shouldn't be caught dead seen in public, so I'm hiding. But of course Ben caught me; it was too hot to wear anything else. Yikes. Don't tell Mom I posted this. 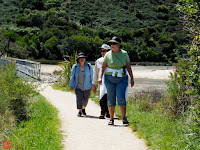 We call this my hobo/basement weaver look. 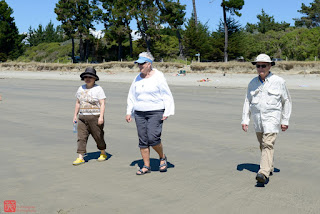 On Friday I was mindful of the incident of the bad T-shirt so I wore a respectable Japanese one, but it being on the short side I couldn't raise my hands. Which I sometimes forgot. But they were taken by the loveliness of Rabbit Island so I'm going to go with, "They didn't notice." The fab Mrs asked if I were still trying to impress the Professor, and though that wasn't the case, I felt strangely stunted, immature, and as clueless and intellectually inadequate to handle growing up as when I was not quite 24. And as always. 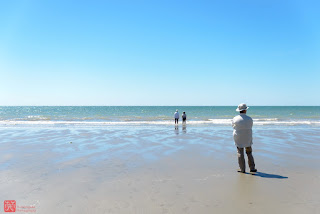 I must get some pics with Ben in them off of their camera.

I don't know what I expected; I wanted them to have a lovely time, (there's in the country for a wee while,) and I wanted to be a good host. I'm so used to Japanese visitors who like complete itinerary setup and be accompanied everywhere and I still haven't learned when/how to pull back.

We had a few slaps on our faces as to how little we know Nelson now; after living here a decade and the petrol prices shot up in '06 I became reluctant to have the ritual weekend drive so we discontinued inspecting the region. Not only are there new roads or/or new names, new tourist attractions, (many being multiples of the same kind,) but also the old familiars have changed ownership, and sadly a few disappeared or changed the nature of their operation. The saddest is when they grow to big and loose the small town touches. We took more than a few detours wasting precious fossil fuel, but it's also rekindled our interest and Ben's set on reinvestigating Nelson and maybe reinvigorating Nelson Daily Photo. At least we can tell you about a few eateries we "discovered", including where you can get cherry- or kiwi-flavored ice cream/frozen yogurt; usually they only have various berries and bananas. That we know of.

I didn't speculate on how my relationship with the Professor might change; will we be nostalgic about my student days; would I reboot my life from the time I was not quite 24; or will we just carry on? We had communicated often enough after I graduated I knew a little about their kids, the all-important grandkids and the cabin. We may have learned more about them, their private lives, (how well do we know our professors' lives outside classroom unless you knew them beforehand or hung around afterwards, right?) but also in a strange way, even though we spoke little about my weaving, (the fab Mrs and I flew from one subject to another to another too quickly to stay on one,) I had a kind of a reboot and now I very eager to get back to weaving, and continue, (and of course improve) my mixed media. The Professor has this radiant smile that makes anyone think they can try again, harder and better.

I'm still struggling with how much to stay informed vs weaning myself off of politics, (we have a general election in late September, too,) and I talked about it a lot. Politics make me pessimistic and negative. I was also made keenly aware, again, of how small my life has become, how hard I've worked to make it so to concentrate on my making, but annoyingly self-absorbed I am! I don't apologize for living deep inside my head; it also helps to keep quiet the voices, but at the same time I wonder if I should aim for a different balance about now, so I can be a happier 60-year-old in 401 days. Seeing/talking to/mingling with Ruby&Ken, Lloyd, Stella&Thomas, Jay, Andrea, Pat, Esther&Jake, JB&Ali and their friends, and D&B in 44 short days make me wonder.

Ben's smaller body coped well; in five days he had three slices of pizza, some bread and a cookie once, beer and crackers twice, and ice cream three times, but his numbers stayed steady and weight the same! The blood sugar started a gradual incline only this weekend, because he hasn't been on his machine much since the start of his cold the week before. No we know his body can handle a bit of carbo as long as we control the intake and he continues the same exercise regime.

Life is good. There is a chance we'll reconnect with the Professor and the fab Mrs once more before they sail back to the North Island; Ben asked yesterday when he should plan to take another day off work. :-D
Posted by Meg at 2/26/2017 02:15:00 PM