As of today I have 365 days, actually 364, until I hit 60. 60th is called "Kanreki (還暦)" or circling the calendar, in Japan, because the 12 animals and the ten elements (?????) of the Chinese astrology, (adopted and adapted by a bunch of countries in Asia,) return to where they were when one was born. Except I think Chinese astrology reboots on Chinese New Year's Day.

And then, I wrote once before that in the old days the age of a Japanese person started at 1 when they are/were born and the country aged by a year on January 1 in unison; oldies used to ask us kids how old we were "counting" in the 1960's and 70's, while when asked by strangers and/or on official forms we had to specify how many years we've "fulfilled", which is what you probably think of as "age" in many places. "J'ai 60 ans," starts to feel more familiar, n'est-ce pas? Except, if you think about it, this doesn't make sense, either, and the real Kanreki should be on the Chinese New Year's Day of the year you "count" 61, no? Well at least it used to be January 1 or thereabouts on the year you "count" 61, Internet says.

Chinese New Year is still printed on store-bought calendars and fancy executive diaries and if you import Japanese, (and probably many other Asian,) calendars on Microsoft Outlook into your own, it'll be there. In New Zealand they started to pop up because especially in the larger cities, Chinese folks put up a fun display of how they celebrate, fireworks, food, lion dance and all.

Anyway, even though meanings and calculations got messed up/lost over the centuries, in Japan, 60th is a big deal, and perhaps until the 1970's or so it meant one started the last stages of life, being surrounded by grandkids and retiring into a quiet life. But nowadays of course 60 is like the old 30/40/50 depending on how fit one is in body and mind. In my case, most probably older rather than younger but I'll let you know next year. 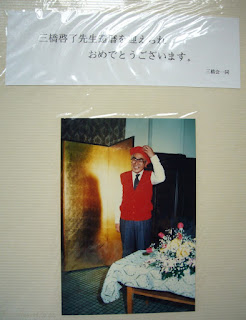 I was naughtily and blissfully unaware when my parents turned 60, (we always had wee family celebrations for everybody but I, the eldest, had no idea about the traditions surrounding the occasion, working at IBM for upwards of 65 hours a week in a new IT job,) but for Dad his alum got together and dressed him in a red vest and a cap. Red, according to the Internet, is the talisman/good luck color used for the new born and putting a red vest signifies rebirth. Strangely, the talisman red, an intense cinnabar red, was used for the same reason for women's undermost garment, shaped like a straight wrap skirt under the kimono, which was, according to Wiki, worn until the mid 1950's before being gradually replaced by "drawers" first, shaped and fit like boxers, then to undies/panties/knickers as we know them, to coincide with the spread of Western style clothes. To this day, the word "drawers" point to the older style and I remember my paternal grandmother preferring them to undies/panties/knickers. Further, Wiki says some women still prefer them so a small number are still being produced today! Well, wasn't that informative? (No, we're not bothering with the men's, but even there the talisman red comes up!) The internet also tells me of course the big celebration was for menfolk only in the old days, and save for some regions, nowadays women celebrate, too, or not, depending on her wishes.

Funny thing, though, is I remember n9th birthdays more vividly than n0th, probably because I get myself into a not-so meaningful but a weird, purely numerical countdown mode. Then again as regards 60, I've been counting down for a few years since my fav cousin's husband, (himself one year senior,) started "threatening" said cousin and me a while ago. Men!!

Anyway, what I wanted to say was, I'm am not even going to try to use up all my yarns, except the cashmeres and skinny cottons, in the next 364 days. No way can I do it, and unlike early last year I don't even want to rush and make things that don't appeal to me. So there you have it.