One biggie is the health non-issues. Our diet continues; our weight stopped decreasing after having lost 9/5kgs respectively, and neither of us are exercising much so this is predictable in my case but Ben's blood sugar level is slightly higher, though still within normal range. Not bad but we could do oh, so much better.

Speaking of normal-in-quotations, I finished seven-and-a-half months of head meds and till can't tell if my head is back in shape. As I keep saying, this has been the mildest episode, but if what I have is still a head problem, it's now gone on nearly a year. And some days I'm so tired I can't even finish washing dishes but have to lie down on the floor and sleep for half an hour. Or more. Mid-March I had two consecutive weeks where many days I could stay upright only seven to eight hours within a 24-hour period. Crazy, eh. So Doc Karl ordered me fasting blood tests to eliminate biological problems; also because this diet, which didn't feel so, could still have been a shock to my system.

We also discussed my news addiction, where news move from bad to unimaginable in a tweet, and the fate of my country of origin is in the hands of two loony kids in grownup jobs and grown up guns, Kim and 45. Abe hanging his tongue out and following 45 doesn't help. When the immigration issue first came out in the US, I considered the possibility we, too, might have to sell up and move back with short notices. There is no immediate danger, but anti-immigrant and especially anti-Asian sentiments which is never far from the surface is coming to the fore again as we prepare for a September election, and I learned in 2000 that though we may laugh at what's happening in the US, the same "fashion" arrives Downunder breathtakingly quickly; now even more so. My mindset has changed, though, and my focus now is more on cleaning up the house and getting rid of clutter in case family members need to evacuate their/our further-nuked country. Overreaction, perhaps, but I'd rather we all be prepared, because I've become so bad at quick action.

My hip problem almost went away and hurt only when I sat incorrectly for any length, and I knew when I was sitting incorrectly. Then I developed an awkward not-quite-pain on the back of my other leg after I've walked a lot, so now I have to review my insole situations. I have high arches and my heels get tired after walking a lot so I have a collection of yummy gel insoles. Maybe back to Tetsu the Japanese acupuncture magician down the road.

Anyway, too much head activity, not enough body activity. To offset this, I've been trying to go into town a little more but not waste $. After a fasting blood test, having had taken seven, seven, vials, for which I thought I should charge Doc Karl and funky Phlebotomist Jude said she could make black pudding with that much, I couldn't even walk to the cafe I intended to go for the first time but crossed the street and had breakfast at an old trusty place. I was feeling so faint usually I have just the eggs, but I had to have an almond croissant as well and it was excruciatingly delicious. (Prego, Nelson.) 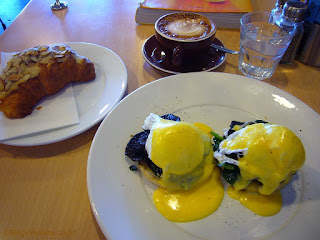 Then there is the money worries. I filed my last ever tax return because it costs a lot to file, and even with my huge deficits and returns, both Ben and I come out at a big loss. Besides, I'm so near 60 I thought I could retire from the business part of weaving as long as it's legal. And it is; I'm not stopping weaving, (well, permanently,) nor selling, but I'd have to sell five to seven times as many to to have to file returns. There are a few things happening: nephew spending a year in Canada, cousin who lived next door is going to be a grandma, and mom wants me to visit this year, not next Feb; without a cogent plan, I've resumed collecting a few books again; I'd like to continue art therapy if poss; I want to travel at least around NZ some, or Australia, (bang for buck, Sydney, Melbourne, or Brisbane worth more for art;) and 60 makes me worry about our retirement more immediately. I feel an online sale coming up after Easter. Although I've been thinking of another since the end of the last one.

Goodness me, this was the preamble. Now we're getting to the guts of the matter.

There is what I label "weaving", which encompasses everything I do/think/research/study which I hope will help me weave more interesting, worthwhile pieces and/or to enjoy the process. Others may call this life. As I said I have been trying to go into town a bit more often, and sometimes I draw, while sitting on benches, cafes, libraries; I don't want people to look at my work, but I'm fine with strangers knowing I'm drawing. Sometimes I just walk around, sometimes I browse through shops, but thankfully I have enough stuff at home I don't cover art supplies and yarns/fabrics/buttons I see.

I miss Andrea at the Suter so very much, and she's got a busier job now so I can't bother her at her workplace, but I have new peeps to pester and ponder about "making" occasionally; Esther and Julie at the Suter, and Stella and Thomas at Volume, and Jean (ex-weaver, ex-tertiary visual art department staff,) and Jay (ex-Red Gallery) when our timing work out, in aromatic environments. And of course Pat when I can catch her. I probably need less human interaction than, say, Mom, but nevertheless time spend with these folks are precious and appreciated.

I feel uncharacteristically unexcited about photography, but get more pleasure out of the slower drawing and collage work. I'm surprised how much I enjoy making tiny simple dolls. I've had my needlepoint out again, and it's April and daylight savings ended today so theoretically it's going to be cooler and not as bright outside from now on. I haven't stopped making, (e.g. Letter Journals and other mixed media,) but I haven't woven since September 29, and though I want to get back to weaving, I don't want the delicate commission baby blankets to be the reentry pieces. So I've been thinking of putting a warp on the Klick or the Rigid Heddle, but haven't so far.

I try to read/gaze at book on paper, but when at home, even tough I can slip into another world immediately, the laptop/Wifi/telly are never far away and before I know it I'm chasing news again. So last week, I went to a library! And it was so quiet, I was immediately in that art-thinking place. It was invigorating and frustrating at once, as I discovered a new-to-me painter, Alan Pearson, whose big exhibition in Wellington just closed, grrrrr..... Expressionist portraits, exactly the genre I'm interested in now. English/Kiwi/Aussie. Although I foolishly chose the biggest of three books to begin with, with tiny gray, not black, text on shiny white paper, (he designed it, the current Mrs wrote it,) and I kept searching for the sweet spot on my multifocals, shifting my posture/position and that of the book, brick, tome, I lasted 55 pages of the almost 400, taking breaks, propping the book on a higher shelf, walking away to see if I can spot the first Mrs who is said to be in the couple's joint abstract portrait, etc. At the same time I kept coming up with themes/questions to consider and flipped my notebook to fresh pages to try and catch them all. Good times.

Looking at the notebook, I thought about three biggish themes: 1) New Zealand/New Zealander-ness of art/colors/makers, individual and collective; 2) living with/without one's internal critic; and 3) the long-standing one, how to make "pictures" within the grid without going into tapestry or jacquard, where is my sweet spot in this; and a few other brief musings. 1) has a long way to go before I can even tell you my interim thought, and 3) I don't know what to do at the moment, but I have a thread on 2), one I touched on yesterday: my inner critic, that pesky, horrible, bossy loud cat.

* Am I able to, if I so choose, completely lock it out of the house? (MEOW!!!)
* Without it, I can concentrate on my making, my taste, rather than what sells or what the gallery wants or what I think I should make.
* Does it makes my motivations/intentions purer. (But does this necessarily make a better "product", meow.) Will purer concentration/pleasure/satisfaction produce good pieces beyond the quality of my experience? (Cottage "industry"/work vs art therapy style; where is the sweet spot?)
* Without the critic, will my process be longer? More concentrated? More meaningful? For each project? And how does it correlated/reflect to my longevity as a weaver and the end product?
* I need peace and quiet to think more than ever as I get older and have less energy. Along with the critic, I've been shedding ambition/competitiveness as well which should leave just me.
* This should allow some time to consider techniques, (MEOW,) training, knowledge, all things classic/proper which self-taught makers lack. Which makes them/me a fraud.
* Are there ways to reconcile, (though not hide,) lack of technical prowess with unrealized vision?
* Won't I need objectivity to assess my creative/aesthetic ambition/gumption and the end product? (Scratch, scratch.) Without a critic, where will I end up? Or am I old enough to know and not need a critic? (Screech, crash, bang!!) Or do I no longer care? (Silence!) And can I live that way happily? (Meow.)

Eventually I reach the technique conundrum, (although not as much as before, because I don't have the energy to fight with myself, and with the last cashmere, I did reach the fish-or-cut-bait stage and took a break, but would like to keep fishing.) Is it because I'm Japanese; did 10 years in a convent school; just like tidiness? Or because it's an easy element to spot/criticize?

I spoke with Stella, to ask about a book recommendation for a stuck maker, and she said one of the things she does is to revisit her "workbooks". And goodness, I used to keep one of those, albeit an excel file of all things; but not for ages, except for special projects; backs of envelopes have sufficed. And I know that it's the technical disappointment, in weaving, drawing and making a beautiful "artist's sketchbook" that stopped me. So there seems to be a few areas in which I need to get over myself and decide what to do with the cat to continue as a happy weaver.