What has been Up, you Ask? 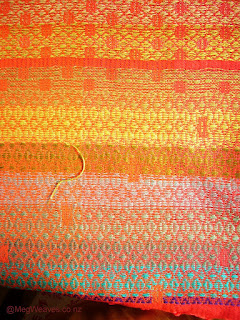 a) A few days after the last post I wove a second sample on the cotton warp. I had a biggish list of problems/observations as a result, the peskiest being when I throw the wrong shuttle, (i.e. mistake the thick/thin order,) I cannot see it from the side facing up, and I can't change face as some sheds will then have nearly all shafts up and the shuttle will fall through the gaps. So regrettably it was time to switch to a more viable solution, (as opposed to researching and experimenting the entire 10m, which was an option at the start but of which I grew weary,) and I modified the old hellebore design, reducing the warp ends, and intend to rethread, and resley at 42EPI rather than the current 39, making the width-on-loom more manageable. 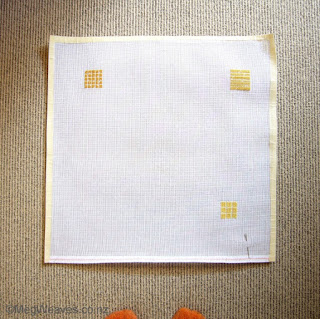 b) As an alternative creative outlet, I started another needlepoint project a couple of days after the last post. It was one of the gazillion projects I was itching to get started, and it's been a savior of what remains of my sanity during this strange summer.

c) Not only has the Tasman fire settled, but our water restriction eased in March, and that's six weeks ago so now sure where we're at but nowhere as dry as back then.

d) I fell into the rabbit hole of Japanese bureaucracy for new passports. Japan doesn't allow dual citizenship, so we remain Japanese with permanent residency in New Zealand, and we must renew our Japanese passports every 10 years. That's not a big deal, but we must appear at the Embassy in Wellington to pick them up, so I thought to get some Japanese Pension paperwork out of the way as well, because some of that require personal pick-up also.

(I have no idea how much I'll get; I'll be exempt from the Japanese income tax but subject to the New Zealand one; and if it's complicated I'll have to pay an accountant to file returns, so I can't even speculate if it's worth it, but it's that warped sense of civic duty in my DNA.)

The difficulty comes partially from the complexity of any bureaucracy, but mainly from my short fuse and near-inability to calmly read complex Japanese texts. I didn't need to while working in Japan; if you work for one employer and don't have debts nor otherwise complicated financial existence, the workplace takes care of it.

e) Christchurch happened. Brexit and Trump have been driving me mad, "demanding" so much of my time.

f) We did go to Wellington on my birthday and had a lovely three-day holiday, walking up and down the small area of Te Ara, around Cuba Street, eating really good food, (good to have many foodie friends,) visiting young Tom's jewelry studio and ordering our 30th anniversary, (end of next April, not this one as Ben reminded me,) un-matching rings, and waltzing in and out of beautiful used book shops. Ben bought me a pair of low boots, we got our passports, and we did go see the terracotta warriors at Te Papa. 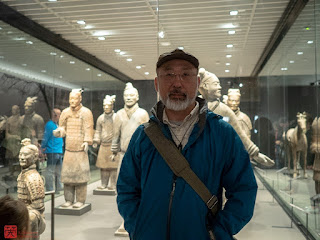 Funny story, I went to Xian in 1986 and saw the many soldiers from a platform in an airport hanger-like structure and I heard Te Papa borrowed a dozen so it felt like a joke. The night before we left Nelson we watched a doco on what horrible men the First Emperor and his successor, his youngest son, were. So I was pretty set on not going. But after we picked up our passports, rain was forecast. Wellington wind was picking up, and we were, after all, so near the place and admission only $20. So we went. And it was good.

There were only eight soldiers plus two horses in the main display, in glass, but one could walk right up and view astonishing details such as braids in their hair. There were many other artefacts, not only from the First Emperor's tomb but from different era for comparison. (His was the most elaborate, of course.) The highlight for me, though, was witnessing folks I assumed to be Chinese Kiwis, in awe, face to face with their history. I'd like to imagine some may have lived in regions far from Xian or big cities and would never have had the chance like this had they not come to New Zealand. Bless them.

g) There was no telly in our accommodation, which we knew, so we dipped into printed books. It was/has been bliss.

h) I came home to finish the pension bit, but 1) I couldn't get as much help from a someone in Japan I was counting on for a reason; 2) post/mail takes much longer these days due to cost cutting on the New Zealand side, and 3) I forgot about Japan's Golden Week; April 29, May 3, 4 and 5 are national holidays plus weekends on both sides make upwards of 10 days with fewer work/school days than holidays, but this year, the Emperor is abdicating so the country is closed April 27-May 6. One of the forms must be submitted within 30 days of issue, so rather than risking preparing a package only for it to be delivered during the holiday and later rejected, we decided we'll make another trip to Wellington in the next few months, and I found I could do a couple of things directly by correspondence without relying on family. Re. Q&A corresponding is harder; phone calls have been more productive. Lesson learned.

i) Brexit and Trump continue to chip away at my sanity while Jacinda keeps shining.

j) I had a 24-36 hour flu and I missed a small operatic performance by Alison, accompanied by eight celli. Yes, eight cello players playing behind one singer, live, in Nelson. (And to illustrate what small town living is like, Alison is Esther's singing teacher, and the daughter of our long-time health professional, Kathleen. I used to feel Nelson was closing in on us, but not so much of late.)

k) I've not been exactly chipper; it's that same-old cold-that's-not-quite-a cold thing. I'm unmotivated; paperwork is constantly on my mind; I know I had a whole bunch of projects all summer, started or under consideration, but don't have the energy to revisit any, so much so it took a few days just to list up what I remember. The only reprieve have been the needlepoint, young adult novels, and some days, but not everyday, cooking, some to hilarious effect. Many days diary entries read: "looking for a project" when I think I mean, "motivation".

We ran into Mark, my art teacher from a short course I did at the Suter a year ago, at the supermarket, and we asked after the latest in each other's lives. For my part I covered the still-weaving but not-selling and was surprised to hear me explain because I wasn't selling, I could "afford" the time to work through concepts, blah blah, which sounded like... ummm... real bullshit. I realized I do not know how I fell about art.vs craft; my definition of "art" is borrowed/taught and not my own; I don't know, or have, what I genuinely want/like to do re. weaving; and that not selling and not having a mentor/shop manager like Andrea is really affecting me negatively now.

l) I've been pining to go to another writing workshop for two or three years. I find them rewarding in a way I imagine some folks do after communing with nature or attending a yoga/religious retreat. Except I haven't found a suitable subject/angle/reason/motivation to excite me.  In other words, I want to go beyond the usual first draft of a part of a cutesy short story I'll mull on a while afterwards then put on the back burner.

When I was a kid I understood adults around me had in mind a mediocre academic track in my future because I didn't excel in anything notable, and my family background was in the university business. Accordingly I put in a sporadic effort with my usually well-intended but short-breathed enthusiasm. One of the things I picked up was I needed to train myself to use words articulately, and, honest, to have an opinion on everything, ideally based on research/facts, but in practice voicing a quick answer whenever drilled by adults. In short, I grew into an explainer/translator/smart-bottom without the depth that would have made me... ummm... a thinker. I also gave my opinion "freely" because that was the right modus operandi, or so I thought, in my family, (enthusiasm, (pro)active participation, robust conversation, etc,) and from there a short walk to a compulsive sharer. :-D

I organized my thoughts in words, lists, structured and in order, editing out ideas and matters that didn't fit. At the beginning of this century while struggling to "be" a better a weaver, (as opposed to weaving better,) I did the whole Artist's Way thing, read a bunch of self-help books attended design courses, and spoke to a lot of art educators, art administrators and artists. It took years before I started to see another way of "thinking": not everything that popped up in my mind/head could be described in words, and some qualities/aspects/elements of the idea were lost in translation. Then, I gradually shied away from translating because the non-verbal soup suited better in holding as much in tact compared to a neat list. Also, words/texts meant creative commitment at times and I began to want to hold on to options longer. Most recently I felt this new lack of compulsion to share meant I was finally maturing.

Except some days it feels a little different; the kind of maturity I had in mind was built on solid cognitive ability/activity and relatively constant/consistent productivity, just more in the background than in your face. What's happening inside me recently is more a lack of activity, a real nothing box, a stepping back from my own life, not observing anything, not doing anything. Similar to depressive episodes but more... "natural". I've had a handful of scary instances where I spent a few moments trying to recall how I did some of the most mundane of activities, and collectively they felt more more like a general direction than my average "senior" moments. I'm also repeating myself a lot more than I used to. So there's that.


m) I never read anything on the Vegan vs. Wool debate because I assumed Vegans were opposed to sheering, from the headlines and comments. And which I enthusiastically labelled, "stupid". I'm lucky to know young Jake who can explain to me these modern debates and yesterday he told me about another angle, that he objects to the ethics of bringing sheep, et al, out of their natural habit for the purposes of human consumption, be it for food, clothing, or anything else. This was new to me and we parted promising to look up water consumption for cotton, (I supposed I should add hemp and linen?) vs. sheep, cow, etc. And because we live in extraordinary times, I can't stop picturing returning the world's sheep to Mesopotamia, cows to Lavant, Jake to Scotland and beyond, and me to Japan and who knows where else. (We aren't sure where we Japanese came from.)

n) Notre Dame burned, yet I've been strangely hopeful about her resurrection, whatever shape it takes, because she has done so in the past. Re. Palestine, Heiti, Syria, Yemen, Afghanistan, BLM, etc., not so much. I continue to allow Brexit, Trump and Mueller to plunder my sanity. I am not sleeping. On Wednesday I cracked a tooth and now need a crown that is going to cost me one Japan trip. I might withdraw all pieces from the gallery/shop and have a "Tiara Sale" here, because that sounds better than a "Crown Sale". Although... this may be universe's way to make me weave more.