I got so sick of being unenthusiastic/unmotivated, wondering if I need my "head read" again, so as a potentially instant remedy, I joined a Letter Journal swap. The theme is "travel journal" and mine is by a gender-and-age-unknown traveler who may have been reincarnated a few times, who has an uncanny ability to know notable figures or witness historical events in the most mundane ways. 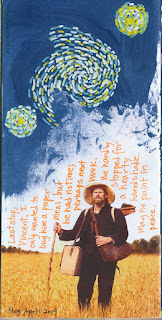 This is the first page I did, and the last page of the book. This swap is 4-person-once-each so ideally the original owner finishes two spreads, or two pages and one spread, at the start. I'm so used to 2-person- and 4-person-multiple rounds, so this looks plain/thin but dit's a start. I overdid LJ in 2017 for a reason, and did only a few last year, but I want to get back into it in a low-keyed way. I've since joined a book-themes swap, but these, and another that started a while ago, will be it until I finish at least one swap.

I've been taking a break from Vincent bios and reading a lot of Young Adult novels Stella suggests, ("The Traitor and the Thief", by Gareth Ford; "Enchantée", by Gita Trelease; and the latest, "A Skinful of Shadows", by Frances Hardinge;) and in between, a couple of Bard bios. 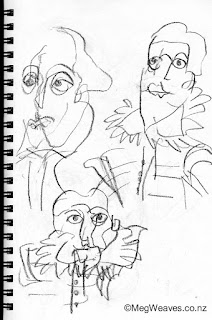 I've also been trying to draw him; anything to get my brain working better. I've found a few portraits I'd never seen, and am sticking to left-hand blind drawings. I don't enjoy the drawing but they grown on me.

After much cogitation, I signed up for a memoir writing course; four Thursday morning during June, held at Volume, I don't know the teacher but I trust Stella and Thomas. I'm not interested in writing a memoir, but I figured my love of the genre will sustain me for four weeks. It will be good therapy.

I'm hoping it will be a swift kick on my cognitive behind because I'm a bit worried about my head. I told you I never had good memory, plus my forgetting pronouns has gotten so bad some days conversations with other humans turns into guessing games; how good are my hints, and how well can they read my mind. That on top of impatience; not suffering fools, even though nowadays I am the fool; inability to keep up with changes and technology; brashness, which I see as as clarity; paranoia/distrust I'm not understood correctly; control freakery; oh, and repeating myself.

I also worry about the weird symbioses with my mom I develooped over the last decade. It started with my unconsciously developing her health complaints de jour, but lately it's whatever I observe and worry about the most: inability to complete tasks before starting another; selfishness borne out of physical/cognitive limitations...

I'm still working through my bureaucratic stuff, which only appear to multiply every time I turn around; this is driving me mad. I can see other humans are finding me difficult to deal with, so I stay away from other humans except Ben and a few friends. Self-loathing is insidious, tiresome, and unproductive. And not pretty. Yuck.

I fell in the rain 2006, because of which I couldn't stand up one Sunday in 2014. Even before that I'd been on a look out for comfortable chairs and we replaced the couch in 2012, the kitchen chairs in 2015, and a couple of years ago I even bought this low/ugly/cheap beach chair for inside, but nothing allows me to sit comfortably. Being short with short legs don't help in a tall people's country, but I'm very short even in Japan.

Last New Year's Eve, we bit the bullet and purchased two rocking recliners which arrived last week, but in different configuration to what we ordered. We shopped at what we think is the most prestigious shop in Nelson because the chairs were good value/quality for the price. But negotiating a fix has been excessively difficult, and is on-going. I had a bad feeling when they insisted we pay in full before delivery, which was contrary to what we were told at the time of purchase, but hey, it's the fancy shop, what could go wrong, right?

Whoever is at fault, (and in this case I insist it is they, 100%,) when so many people find me difficult, I've got to have a hard look at myself. Eh.

I've known six counselors/psychologists over as many years while coming to terms with depression; the first, we liked each other so much I felt she was too sympathetic; three I met once and knew they were wrong for me; one I met through a government scheme but the scheme and the office are gone; and one I could have worked with but she moved to Christchurch to live with her elderly mother. I have no go-to person, but these sessions are too expensive for what I (don't) get back from the sessions, and anything I learned about depression is through reading, and a website fronted by Kiwi rugby legend John Kirwan. This time it's not exactly depression but maybe another visit to Doc Karl first.

In addition to forgetting, etc., etc., I'm angry so often or feel utterly put-upon. I'm reminded of Dad in his last days; his anger was boiling just under his skin but I didn't know if he knew what angered him so. He fought hard to hide it; it must have been exhausting. Thank goodness I have Ben and his ever-so-even temper. He's hopping mad about the chairs, too, but he doesn't get as worked up. We just had our 29th on Sunday.

And just in case, I added St. John's Wart and B Complex to my daily Ginkgo.

We're spending beyond our combined means of late, and then on Wednesday before Easter, I cracked a tooth. Eventually I'm going to need a crown, which costs me roughly one return trip to Japan. I haven't been able to sell pieces, but I think I better make new stuff regardless, so today I finally started rethreading the orange cotton piece in a modified version of the hellebore design.

The emperor abdicated today; tomorrow we get a new one and a new era starts. No, really, in Japan we have a name for each emperor's reign; up to day, 2019 was Year 31 of Emperor Heisei; starting tomorrow it's Year 1 of Emperor Reiwa. That we have an "emperor" in the 21st century alone is ridiculous, and expensive, but I don't think I'll take on that problem this evening.