On Memoirs, Coincidences, Voices, and Scribbling on Cards

Lest you imagine me stomping around in my crumpled bathrobe, mumbling loudly with steam coming out of my ears, (which in a way I've done most of my life, but in another, not as much as last night's post suggests. I don't wear bathrobes, and I'm more a feotal-position-with-permanent-frown kind,) I've been rethreading while listening to new-to-me author Ali Smith.

On Monday, I had intended to show up at the memoir class emotionally/mentally au naturale, but you know me, I like to prepare. (If only that was the case when I was a student!) I started listening to the audiobook of Mary Kerr's "The Art of Memoir", which I got when the book came out but never finished. I was reminded why: I can't relate to her life; I haven't read most books she mentions; I don't like her language in what is supposed to be an instructional text, not fiction where a bit of swearing add texture. So I thought I'd reread Stephen King's "On Writing" (of any genre), Philip Roth's "Patrimony" and the father portion of Richard Ford's "Between Them". Interesting they are all old white dudes, (which is why I picked up Kerr in the first place but wasn't crazy about two of her memoirs, either,) and I'll never touch King's fiction, don't like Ford's and only some of Roth's, but the two memoirs are lovely homage to their late fathers. Not that I want to write about my Dad, mind, but Roth's, in particular, was written as his father was dying and three years after mine passed, and perhaps I could have used it earlier but still so good. Buy these in books printed on paper, if you are interested, or borrow, nothing electronic.

Came Tuesday around Insomnia O'clock I saw a Volume FB post praising Ali Smith's "Spring". I had heard of Smith, of course, but I usually shy away from authors modified by "new", "young" and "next", so I'd never read her. But at 4AM in a cold house, what is one to do? I clicked on one link, then another, then another, and ended up with an audiobook of her "Artful", "narrated by a character who is haunted - literally - by a former lover, the writer of a series of lectures about art and literature." In the sample audio, the protagonist drag her ex's just-arrived chair on wooden floor with carpet bunched up under it. Plus this one is read by her, (but not the newer novels,) and because I like Scottish accents, (she doesn't have a very strong one,) this was it.

I learned from the articles that morning, reading Smith requires ill-read readers like myself stopping and googling like a local/slow-train ride; there are plenty of books/authors she alludes to that I haven't read or read when I was in school, and then there are the the artworks. For now I'm content having her read to me while I rethread, and I will listen to her as many times it takes to get through the whole warp.

Listening to her, my mind wandered to Tóibín, whose voice and work is my hypnoses. I love his Irish stories read by him the best, but anything by him read in an Irish accent, or him talking about anything, makes me stop/scribble/wind back and think about writing. There are some lovely vids and podcasts online. (Ford gives wonderful presentations, also; a laugh a minute stuff with substance.)

Anyhoo, I started writing random notes on cards. Notebook pages are linear and scream out order, while mind maps are too messy, so cards I can rearrange. And I write in pencils because I make many mistakes, (my types are not unique to keyboards,) and I like the thought of my words being smudged and eventually disappearing. (Or I can recycle for another project later.) I'm even pleased my handwriting can be illegible. Except when I have to read it.

Yesterday morning I wrote on seven; five are recurring items, and what a relief to have two new thoughts. Because I so need new thoughts/feelings/discoveries. 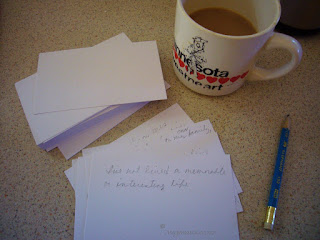