Monday was the last day of the 10-day public holiday in Japan; there are many public holidays crammed in the short period between April 29 and May 5 every year, but with the abdication/crowning I hear the government recommended it be semi-mandatory this year.

I'm terribly annoyed seeing the pageantry in Western-style clothing. Even we Japanese don't get to see the traditional garb often; they are, or are similar to, the court fashion during the time of Tale of Gengi, and probably long before and after. Male hairs and their brides got married in them in the 1990's but who knows what will happen to succession, marriages, or what they'll wear in future. 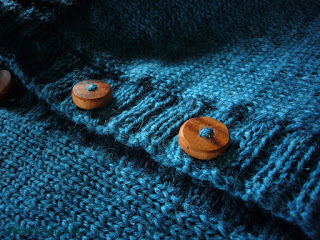 We asked Richard to knit Ben a sweater, and it's come up a real winner. I'm supposed to wash/finish/size it, but a) I don't know how to do it properly and must consult Youtube, and b) Ben's been wearing it whenever he's home and not sleeping, so I'll leave it as is for a while. One of the things we wanted from the start was for Richard to pick the buttons, after seeing fo his knit cushion covers and his talent for picking out striking buttons.

Once again, we were bedazzled by his choice. These are locally handmade recycled teak, roughly 23mm in diameter and 6mm thick, and they stand out without fighting the rest of the sweater, let alone steal all the attention. As Rosie pointed out, "they makes the sweater a statement piece." (I think that's what she said; I heard "statement" and my imagination ran away.)

We knew If I chose, I would have gone for the least visible, thinnest, possibly smaller, and something in darker in value, so as to make the knit part stand out. Ben would have done better, but I might have talked him out of it, or we might have compromised with, say, something made of bones or horns, striking but ordinary. I know these choices emanate from one's taste/preference in the first instance, but there's more to achieving a nuanced/sophisticated look, not the simplistic harmony/disappearance I tend to go for. How do I develop this kind of eye?

Richard's partner is Rosie, the bookbinder, and I talk a lot about making, (although she has been far more prolific than I in recent years, in spite of her many commitments and a far bigger garden.) One of the things she brought up was the precise, (she used another word, four letters, starts with "a" and ends with 'l",) nature of her craft, desirability of perfection, and the attractiveness of imperfection. I was reminded of when I was younger and more ambitious, when I aimed to weave technically perfectly, and we laughed. Pleasingly, or perfectly, imperfect isn't easily achieved, we didn't think, so do how we investigate that? Then we laughed, again. And sighed.

I've been looking at collages online because I want to up my game. Early Surrealists did some nicely understated stuff, and there is always Nick Bantock for visual joyride. I've always imagined good drawing skills would help to make beautiful collages, but I'm not making efforts to improve my drawing, so I'm looking at composition, proportion and reduced color palette. The problem is, I'm too in awe of work I like to be able to study them, and too many different styles at that, among them many, many simpler, not-layered look. I can't decide if that's what I want. 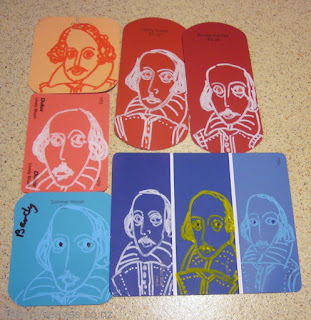