On Memoirs, Synchronicity Overload, Meaning of Labels, and Re-collecting

I wrote this Wednesday morning, so the radio thing happened on Tuesday. I sat on it because I felt there was too much depression talk when I wasn't depressed, and glad I did. That's almost all out.

I check who is interviewed on Fresh Air every morning and yesterday it was another memoir writer. Too much synchronicity get cloying, and I had never heard of David or Erin Carr, but it appeared promising so I listened to Erin first, then David's 2008 interview about his memoir, (and lo, there is the Minneapolis connection,) and another 2011 David interview. That's a bit of synchronicity overload, but it was a good intermission between Ali Smith Rounds 1 and 2.

Erin Carr mentioned a family expression that went something like, "Addiction explains everything but solves nothing," which resonated with my view of depression. There's a fine line between using an ailment as an excuse, (what I call "/insert-ailment/ defining a person",) and explaining/examining it. I don't mind labeling myself as a sometimes-depressed person, because it has/does open up opportunity for discourse, and because it's like eyeglasses with which I have to keep checking myself from time to time, but it doesn't exonerate me from trying the best.

David Carr, on the other hand, was the first person I heard say out loud the creepiness of holy communion, although he remained Catholic. This used to freak me before First Communion. Then there is that ickier thing where every nun is married to Jesus and they wear wedding rings. Cannibalism and Polygamy in one go. Yeah...

I've been wondering what to get Mom for Mother's Day and I came up with a good idea. Since I've been enjoying young adult novels so much, why not a few of these? She's joined an English Book Club at least twice because she knew all the members for decades, but didn't last long because she had to look up the dictionary too often and lost the plot, or the books had sex in them. :-D Young Adult books I read don't have sex, but they are usually "historical", (i.e. with reference to real people/events Mom may not be familiar with,) and often has magic, which isn't her thing.

She'd love Beverly Clearly books: real, current, and everyday characters and occurrences. But those, I could probably find online and have them sent to her, as well as books by one of my all time favorite authors, Erich Kästner, in Japanese. Who knows, she may even be able to talk to my niece, who is apparently turning into an avid reader. That was my thinking in the morning.

I went hunting for perhaps Ramona-like lead character in the afternoon, with not too many words she'd have to look up, something perhaps she could sit down after dinner and finish in a week, and I found two. When I went to pay for them, what do I find in front of the till but a Kästner! And they all have lovely dull yellow covers!! 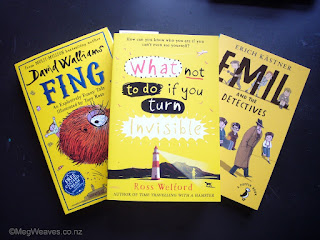 (You caught me; I got one more, NZ author Maurice Gee's book he wrote for her then-young-teen daughter when they lived in town, but that doesn't have a yellow cover, so I "censored". :-D)

I'm planning to read all these without, I hope, damaging the spine, and scribble meanings of difficult words and/or make a card with a list of characters so she doesn't get mixed up.  Mom's not a reader, (she's a jock!) but I think she'll get a kick out of finishing books in English without needing a dictionary. Or she'll tell me to stop sending them.

All this talk about Kästner and Clearly reminded me something I'd not thought of for nearly 40 years. There was a time I planned to become a young adult writer, long before the concept/label became popular. I had in mind a target audience who were sentient beings with all the answers to the world but not all the questions, and sensible not to turn into an adult yet. I had to give up this goal when I realized I was too old to remember what it was like to be that way. I was heading towards 25 or 26, starting to see both sides of issues, and suddenly didn't have all the answers, but oh, so many questions.