And Then There was This 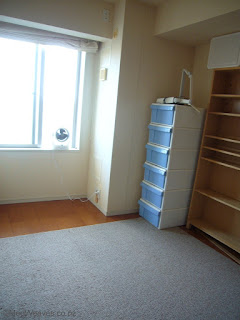 So we've come to the end of Mom's second and last weaving space, and I was all ready to lament the end of her weaving life in a most sentimental way. Except I can't.

Mom rang Thursday, during the top of Seventh inning of the Summer National High School Baseball Tournament Final, (a family's obsession since before me,) to which I'd been listening on the internet because she took the TV, asking me yet again to add-this-check-that in move box. Gradually I broached the subject of staying creative and forward-looking in what I see as marginally-better-than-a-long-hospital-stay life. Yeah, nah, her condition is so that she's not in a idyllic, gated (?) mini garden of Eden retirement village, but a 24/7 care unit/room where she's discouraged from having even an electric kettle for danger of burning herself. (I don't know if it's my sister or the facility that said this.) Still, Yoko found a place near her place, (10 min drive, plus looking for parking, not far from brother, either,) famous for daily recreational activity, an annual exhibition of art/craft made by residents in a public venue, private concerts in a municipal hall, outings, etc. My sister has a few miracles under her belt, (she's the only Mitsuhashi whose deeds far outperform her words,) but this is big, without discounting her tireless, under-the-radar work, which she never mentions. (Yeah, I know my sentences are turning into runny gibberish, but I feel that way today.)

Eighth inning, didn't even know which school was pitching, the metal bat hit the ball, the stadium erupted, and Mom contemplated, "Frame-weaving is the only thing left for me..." Say what? You never mentioned anything about saving weaving anything for you?

"Of course I asked you yesterday!" No, you only mentioned a bag of embroidery floss for Ms Y? See my notes here of our every conversation?

"Yes, I did... but it's OK, if you weren't listening to me, I'll just live out my days without means of expression. I don't want to get into I-said-you-heard... Besides..." No, she really said that.

Pandemonium in Kohshien Stadium; "Stop, mother! Just tell me what you need to frame-weave? Right... Right... Right... and how about the fish net needles? No, you sure? OK. I'm going to hang up and look for these. Sit Tight."

Game over, not sure which team won, but I got most of the stuff she mentioned, selected yarns based on colors, made note of what Mrs S has already taken, rang her to ask them back, (in a way, you do get used to these occasions,) report back.

"For heaven's sake, of course I need the fish net needles. And combs. But if you've given them away, I can't weave, or you'll have to buy them for me. And the yarns you choose will determine how good my work is going to be." Revise yarn selection; she said she didn't want rug wool, but I put in a few to balance values.

Saturday night I ring her to report Mr and Mrs S removing everything else; Mrs S will use some, she'll contact weavers to give others away. "But how can I weave without books?" HAVE YOU MET EVEN MET ME? Of course I threw in a couple of books!

The whine is new, but the intention old. We siblings laugh it off now. I'm just glad, as was Mrs S when she handed back to me the fish net needles, combs/beaters, and a couple of other things, Mom's thinking of weaving again.

"Why did you save so much yarn? What, you want me to weave to death?" I kid you not. 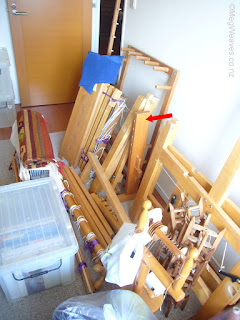 This was about half to a third of Mrs S's haul. See the upright part of the loom bench? Try as we may, we couldn't dismantle the bench because the vertical pieces were firmly lodged into their holes; Mom brought it in tact from the old house because Yoko had not marked the parts as she did meticulously the looms. Mr S loaded everything in their tiny hatchback, but could not find a way to fit the bench, so he smiled at his wife, a woman a little taller than me but about 35-40kg, (trust me, they are not rare in Japan;) "You're going to have to carry this home." Mrs S laughed, "It's not that heavy. See you at home." Mr S drove off with an empty passenger seat; Mrs S trotted off to her house ten minutes uphill.

For the first two and a half weeks, I tried to stay on NZ time and start working somewhere between 4.30 and 6am and hit the sack early-ish. I must have been exhausted because I just couldn't find my gumption this morning and I've paced from room to room, (having gotten rid of much, I can now do this,) and thought about what I want to weave in the near future, and now it's almost 2PM. Ironic because today has been the least humid and most pleasant since I've returned. What remains are many, many trips to the building's trash area; the separation of items is minute and somewhat mysterious, but oh-so-much easier than living in an independent house.

And culling stuff I want to "inherit" and packing/sending them off, in a way, the toughest job.

Still not sure which school won, but either way, if memory serves, it was the school's first time winning nationals. Well done, everybody.
Posted by Meg at 8/25/2019 04:56:00 PM