So Here We Are

I'm in very hot and humid Yokohama, though not as bad as in 2013 nor Australia most summers, but summer in Japan, avoid if humanly possible. Some places are getting torrential rain and flooding; we get only sun or lid-like cloud, visible/tangible humidity, and tentatively dry laundry. But then other places have gotten 40C, so I shouldn't complain.

Mom fell once too often and went into care at the start of the month. I waited a week until the dust settled and came here to help clean out the apartment, especially the weaving stuff, of which she still has oh, so, much. But both her students took one loom each with a few equipment and yarns, (an RH and an 8-shaft, so between then they can cover all techniques they learned,) and one weaver/travel friend, who happens to live down the road, has offered to take everything left over so she can keep some and give away the rest. Bless her. She's a year younger than me, and we had a rip-roaring talk about turning 60 and the "sudden" physical restrictions re. weaving; we had both thought we were the only ones!

So here are some pics of my mom's current weaving "shop". 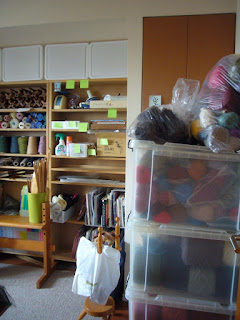 My mother had a habit of breaking up sets and groups so it took me three days to gather together same/like stuff, including balls from one set of yarns in something like four places. 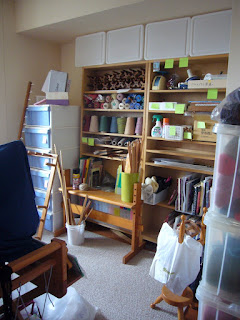 It's a wonder how Japanese manage to fit stuff in such small places AND work in it. My body was not built of this! 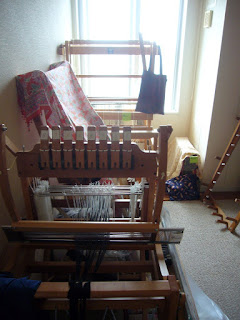 When Mom moved from the house to this apartment five and a half years ago, Mom started dismantling the floor room rapidly; my sister, not a weaver, took countless photos and meticulously marked the pieces, so I don't have to worry about that. 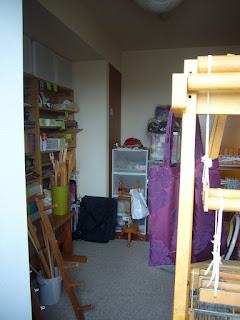 I'm looking in from the veranda; it is the size of a tiny single bedroom.

Not sure if I'll have time for another post while in Japan, but I hope you're having a survivable season, wherever you are. (I was making steady progress in the garden in Nelson, and am now missing my favorite kind of a long, cold spell!)