Yesterday I went downstairs eager to keep working on the hellebores. The sun was high, coming in indirectly, making my web look like a study in simultaneous contrast. Feeling giddy, I was ever so eager to show you nice after I wove half a repeat, so I advanced the warp. And... I had this strange feeling, as you do, so I looked around, walked to the back of the loom, checked everything, randomly tugged on the warp, and, gosh, darnit... 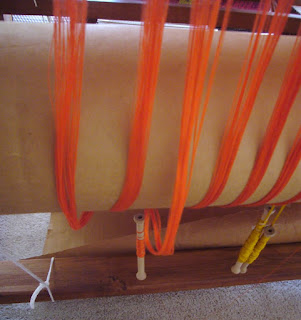 From where I sit as I weave, the first and third inch bouts (?) from the right selvedge suddenly loosened! It was so weird I couldn't believe my eyes, but as I type, I'm glad I tugged on the right bits. 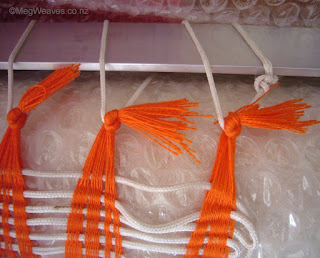 Because the problem corresponds to the distance from the right selvedge exactly, the first and the third inches, (is that intelligible English?) my first thought was the lashing had come undone, but no, no problem there. Besides, I'm almost a meter in, and lashing problems usually present themselves earlier. So I can only conclude that after I threaded/sleyed, when I usually wind back the warp about 30cm, there must have been "folds" or loose bits or something in the first and the third bouts. Or strange creatures live in my basement and mes with my looms at night. 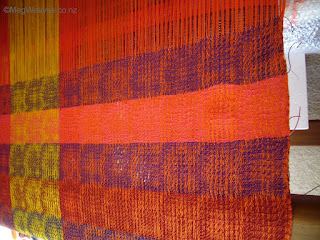 I had no problem until I tugged on the warp at the back, which was about 1/3 of the way into the last purple weft. I probably should have stopped right there and even unpick, but I must have been in a bit of panic, I hung all my fishing weights on the two bouts, (hardly enough!) and wove until the end of the motif. I sourced a vinegar bottle and an oil bottle for proper, heavier weights, but didn't feel much like weaving today. I'll decide if I want to unpick the last 62 picks tomorrow. I also checked the rest of the warp and there was no further, immediate danger.

You know, Rugby started in Japan and although we've watched perhaps one game since 2011 or even before that, (I quit when John Mitchell was named coach, which was, oh, dear, 2001!) Ben's been watching whatever free-to-view, (always delayed,) coverage he can find this time. Friday night was Japan vs. Russia, last night was All Blacks vs. Boks, so to keep him company, I started on my biggish tie-dye project as well. 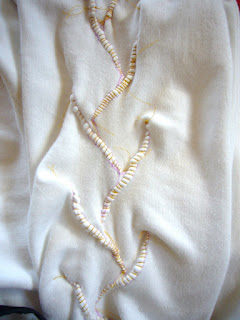