I posted on Facebook about making a warp, one of my favorite activities weaving or otherwise a former colleague asked me what a warp is, so I promised her some pics.

So often I tell non-weavers a) most of "weaving" is prepping the loom, and b) the vertical warp yarns are either up or down, and weaving is the simple act of sandwiching the horizontal weft yarns between warp yarns.

I thought I'd record how I make a warp, and later how a loom works, to show how time-consuming the prepping phase is, and because this is where the physical process of weaving starts, and also, because of the unique situation with my house, it's the one process that suffered no big change over the years so I don't have to think too much to write abut it. :-D

A warp is a collective name for a set of yarns, individually called warp "ends", measured to a specific length to become the vertical set of yarns attached to the loom while weaving. Before I can make a warp, I need to plan a project to know the specs of the warp. Sometimes I start by designing a project, which includes the overall look of the piece; approximate finished size, (a piece of weaving morphs several times from when it's on the loom under tension, off the loom and relaxed, and especially in case of wool, after the very first wash;) texture, (sometimes called "hand";) and a gazillion other things. Then I select the yarns to best realize the plan. Other times I select the yarns I want to work with based on the fiber content, size, and colors and amounts I have, then plan. Usually these decisions are made together organically.

Only after I have a plan, I know which fiber/size/color yarns goes into the warp, (and a fairly good idea of what yarns to audition for the wefts;) how many ends are required to achieve the finished width; and the length of the warp to accommodate not only the project but a rather large amount of loom waste, portions of warp necessary to weave the project but won't become part of the finished piece. 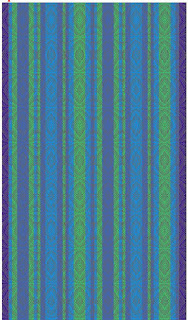 This is part of the plan, called a "draft", for the warp I'm making this week. I'm not sure if I want the navy border at the sides, but I make that separately so it doesn't matter just now. The colors in real life is darker as I'm paring each of the Marine, Sky and Teal yarns with a Navy, treating each pair as one warp end. These are four colors of the same skinny New Zealand merino wool.
(EDIT: I swapped the above picture. I don't know what I was thinking but the draft was three times the width of the planned project.) 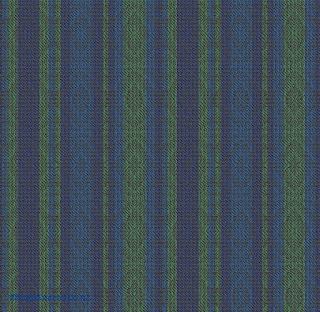 This is more like it. I'm going to make the final piece, an adult-size couch blanket, by weaving three panels and stitching them together side by side; each panel's warp color distribution looks like this. Now I can count the number of warp pairs I need; it's a little hard to see, but from the right, it's 8 pairs of Marine+Navy, 13 pairs of Sky+Navy, 29 pairs of Teal+Navy and so on. I need to wind 428 pairs, or 856 ends, of yarn.

Lengthwise, although I probably need between 7 and 8 meters of warp, I love to weave samples and I don't want to run out of warp while weaving the project, so I'm going for the maximum length I can on a tool called a warping board, a little over 10 meters. With leftover warp, I'll probably get a shawl, but if not, I usually weave warp-end fabrics in the hope that some day I will actually turn them into something usable. (I have a rather large stash of these warp-end fabrics, though.) 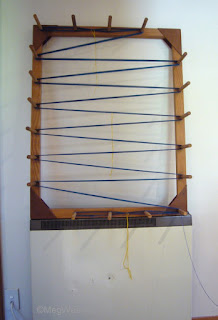 Finally I can make the warp; like many things in weaving, the actual physical work is simple and repetitive. Key here is to pull the yarn off the cones and wind it around the pegs under the same tension for every single end/pair, and count accurately. From the top left to the bottom left-of-center makes one warp end; when I turn round and reach top left again, that's the second warp end. Wind, wind, wind... Can you tell, at this point, it's just a pair of long pieces of merino going around the wooden pegs? If I'm using only one color, an entire warp can consist of one long piece of yarn.

When making multi-colored warps, I cut and tie different colors and keep going, but depending on how I've combined colors, sometimes I make separate warps for each color, then blend them when they go on the loom. 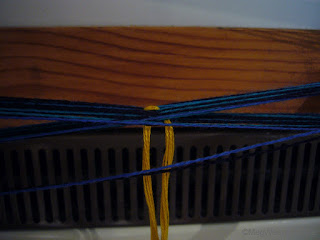 Some of us use contrasting color yarns, (sometimes loom waste from previous projects,) as counters. There is also the small matter of making crosses, which are super important when we put the warp on the loom, but for now, I'll just show you one; I make them at the start and the end, or the top and the the bottom of the warping board. 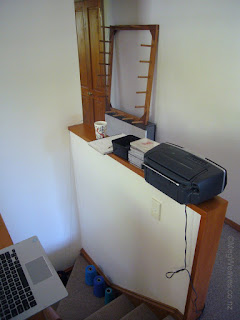 I mentioned the unique situation of my house. Yarns come off cones easily when pulled up rather than sideways. There are gadgets to help with this, but conveniently I have a wee landing near a small wall-mounted heater in the hallway, which together works treat. (This heater is very old and and inefficient and we once tried to replace it until I remembered the morning it was supposed to come out that I needed this more than a new, efficient, undinged heater 10cm taller. Also, the heater is in front of the loo, a fact I don't like to advertise, but if needed, I have one immediately behind me.) The cones sit on the landing, yarns are pulled straight up, I stand in front of the board/heater/(loo) so the yarns travel a good distance upward.

I used to listen to music on the boombox, but these days it's more often podcasts, audiobooks or even videos on the laptop, but you can see I have everything I need, including CDs, an ice cream container of loose strings, and tall cup of milky chai.

The rest is just repeating, not even rinsing. The pegs on the warping board may fill up and I may need to split one warp into two "chains" but otherwise, I keep winding and counting. I like to make a warp within the same day so the tension remains the same, but light is the most important element and as I get older I started to have difficulties seeing, (i.e. counting accurately,) under artificial light. If it is a big warp, say 1600 ends, I have to do this over a couple of days because, again, I start to make counting mistakes.