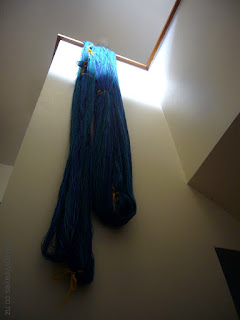 My new warp, in two parts, 10 meters each, folded and hung until I'm ready to dress the loom. 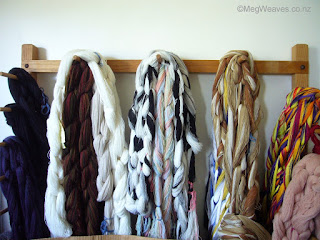 Some weavers make chains, but a few ends always snag which can be problematic later, so lately I don't make chains with skinny yarns but fold and dangle. (As you can see, I like making warps and, gee, I have a few I haven't woven.)

There are as many ways to dress a loom as there are weavers, dependent on how you learned, the loom, position/direction of various equipment and the space available, the weaver's body size, and preferences. Even though I have one basic method, I modify it to suit the loom/space/project, but the basics stay the same. The most crucial thing is for every warp end/pair to go on the warp beam under the same tension. Or, not loose one here and tight one over there. If I spread out the warp to roughly the width of the cloth, and place the very first end/pair I placed on the warping board at far left or far right of the cloth, the second next to it, the third next to that, etc., there is a better chance the warp will yield uniform/even tension without tangling or breaking. 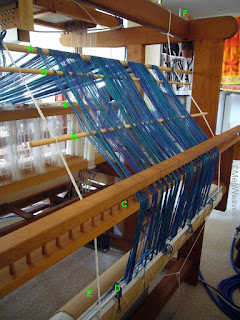 This is the back of my loom where there is very little space. Remember the cross I made while making the warp? It preserves the order in which the ends went on the warping board, and here I'm using two dowels B we call lease sticks, (they can become something-else sticks another time,) to keep that order. Warp ends/pairs goes either above the top B and under bottom B or the other way around, alternately, and they cross near b. Stick A assists all warp ends/pairs travelling from the front of the loom to enter the cross in the same angle.

I put a rod D, (or sometimes a slat depending on the project/fiber,) through the loop at the end of warp and attach it to a slat attached to the warp beam. The warp is uncut at this point, so it's still one, (or in this case, four,) long pieces of yarn.

I now spread the ends roughly in the width of the cloth on a tool called raddle C. A raddle has spaces in one inch increments, (I use inches for width and metric for length in weaving,) and I'm weaving this project with 20 pairs of ends per inch, so I count 20 ends/pairs for each slot. The original position for the raddle was at the top of the loom F, but it was too high even for the previous owner of the loom so she attached parts so the raddle can rest at the back of the loom above the warp beam. Otherwise I tend to prefer strings, yarns and other more temporary setup so I can accommodate different fibers, thicknesses, width of the projects, etc. It could also mean I change my mind often and have a fear of committing. :-D 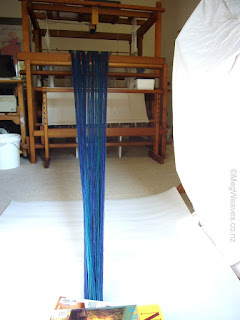 This is the view from the front of the loom. I pull the warp as far back as I can, and put some weight. I used to like pulling the warp over my cut pile carpet, but for skinnier or delicate yarns, I prefer to pull it over smoother surface. This time I'm using a thin foamy sheet that must have come as a packing material because I'd love to have more of this but haven't been able to find it.

To my right is the warping mill with the red Syrie warp still sitting on it. To the left, (and I'm surprised it didn't show up in this photo,) is the back of my four-shaft loom. I've been "thinking out loud" different configurations/storage schemes since I've come home from Japan and haven't been able to come up with a solution, but no matter what I leave a gap here so I can always put a warp on the big loom.

I unlock the brake at the side, and I wind the warp beam backwards, placing slats or thin flat sheets of different material to separate the layers. As seen above, I'm using corrugated card board E this time. I keep my eyes around the cross b and environs where it's easiest for yarns to tangle and break. 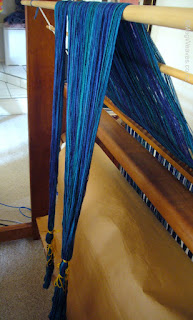