The next step of dressing the loom is slower but I find it meditative, and if it weren't for the physical discomfort, could do it for long stretches. Before I can get into it, however, a brief explanation of how my loom works may be necessary, requiring more weavers' jargon. Sorry.

I said, "b) the vertical warp yarns are either up or down, and weaving is the simple act of sandwiching the horizontal weft yarns between warp yarns." How do I make some warp ends go up to create the gap, called the "shed", in which to trap the weft?

I have white polyester heddles on this loom, old heddles were made of strings or metal, but they all have "eyes" in the middle to thread one warp end through. Each heddle is attached to a shaft, and every heddle on the same shaft go up together, or come down together, as a group. Since selected shaft/s go up, my looms are rising-shed type. Traditionally two-, four-, and eight-shaft looms were mainstream, but increasingly, 16-, 24-, 32-, and 40-shaft monsters have become available to home weavers since the 1990s. That means, depending on the loom, two, four, eight, etc, sets of strings going up or coming down together.

The order in which warp is threaded, (Shaft 1, then 2, then 3, for e.g,) and which shafts are lifted in a particular shed decide the line/shape of a design, in the first instance. So greater number of shafts, the more complex designs can be woven.

A project requires as many heddles as there are warp ends, or pairs in this case, because every end has got to go up at one time or another, lest it will stay under every weft right the way through the cloth without interlacement, and then that warp end will come away from the cloth after the cloth is taken off the loom. Many looms have many heddles, and they can be removed from one shaft and transferred to another easily if the design requires, as long as there are enough.

Every warp end must be threaded through a heddle eye, so we call this task "threading". Some project are quick to thread, depending on the complexity of the design and number/size/characteristics of warp yarn. This one is has been smooth sailing. 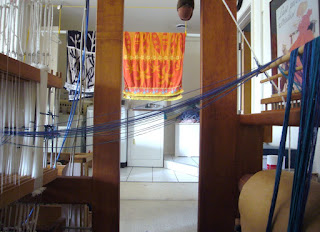 This is my view. (Not my laundry, silly.) I sit on a tiny canvas camping/fishing foldy seat between the heddles/shafts to my left and the warp and back beams to my right. 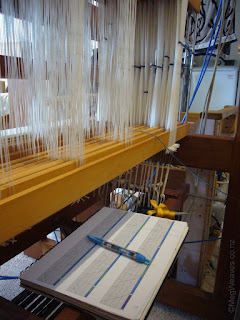 The heddles are stretched between one of the 16 shafts, Shaft 16 being closest to me at the "back" when I'm at seated at the bench weaving. Below is the threading portion of the draft, (and on this rare occasion, with colors,) I mark off as I thread. Because I thread from the back, I read the draft upside down, but in most if not all drafts I weave, if I mistake the top from the bottom, this is easily rectifiable when I weave. 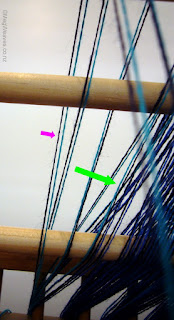 Warp ends/pairs are to my right slightly above my head, waiting to be threaded; it's the last 1 or 2 meters you saw danging in the last pic in the last post. Close up you can see the cross, green arrow,  (i.e. the order in which the warp ends/pairs went on the warping board,) between the lease sticks. Seen from the front of the loom I start threading from the left side on this loom, (because the right opening is easier for my unsmall self to get in and out of,) the far left warp end/pair, pink arrow, is the next to be threaded. 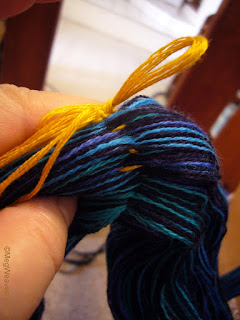 If for some reason I lost this cross, although the warp is already wound on the warp beam, I still have the second cross I made at the top end of the warping board as consolation. 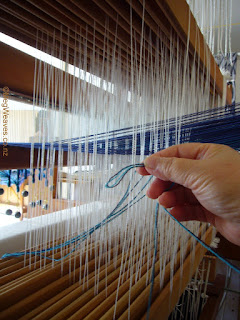 I take the next end/pair, and thread it through the eye of the next heddle in the appointed shaft. One of the worst thing about aging is eyesight; I am severely near-sighted and switching short- and mid-distance is not happening. A lot of weaving, particularly theading, is done by feel. I can see which shaft I'm choosing, and I actually make surprising few threading mistakes, but I sometimes thread not in the eye but the slots above or below them in these modern heddles. 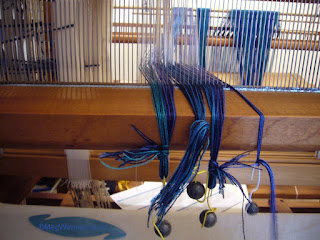 This is one step that may be unusual. Because my sitting/threading position is uncomfortable, I come out every once in a while to the front of the loom and "sley", or pull a set number of warp ends/pairs through the slots in a reed, a tool that regulates how close warp ends to sit to each other. I find not only is this better for the body, but I have also been able to spot threading mistakes by sleying incrementally.

In the last post I wrote I wanted 20 ends/pairs per inch, but while threading I changed my mind so I sleyed at 18 pairs. This reed has six slots, "dents", to every inch, so I am pulling three ends/pairs into each slot in the order I threaded, starting at the left end of the cloth. I don't know if I should call this 18 "end"-per-inch, ("EPI") or more accurately 36EPI, but higher the number, the more warp ends are used in every inch. And if you thought the weaving width on the reed is going to be ever so slightly wider than in the raddle, well done, pat yourself on the back and treat yourself to a small piece of sometimes-only treat. (And after sampling, I even re-sleyed to 24 pairs/48 EPI!) 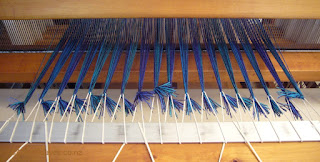 After ever warp end/pair is threaded and sleyed, I pull and tug on each carefully, and make a knot knotting together 18 pairs, i.e. one inch in the reed, and lash it on to the front/cloth beam, and adjust the tension. I want even, universal tension, and for this, feeling the warp with the back of my hands with my eyes closed works best.

Now I'm ready to do another of my favorite parts: sample weaving.

Here are some bits I excluded to keep my explanation "simple".

*Some techniques require the weaver to pry open a gap in which to insert the weft, (think prototypical tapestry looms.) On a vertical loom the warps are not up/down but front/back. And while some techniques don't insert one long weft but only portions of it to achieve a different effect, (think cut pile, for e.g.) But the fact remains the weft yarns are sandwiched between and held by the two sets of warp in any shed.

* There are looms with more basic heddles, e.g. a long string wound around warp ends and a stick alternately, (I've not tried them,) but the theory is the same.

* Rigid heddle looms are two-shaft looms. At the other end of the spectrum, Jacquard looms allow manipulation of every single heddle separately, which is why they can weave oh-so-dreamy pictures. They are the ones to end all shaft-envy. Then there are draw looms, which I understand to be between a Jacquard and a shaft loom, but I've never seen either kind close up to tell you any more.

If you are serious about knowing more about types of looms, how they work, etc, there are far better teacher-weavers-explainers online and in books than I. If interested, leave a comment and I'll try to find some, or better yet, look it up yourself, or if you're lucky enough to have either, ask your local weaving guild/group or weaving supply shop.
Posted by Meg at 2/05/2020 05:18:00 PM