The act of weaving itself is visually unremarkable in still photos, and repetitive, so this is going to be quicker than you might imagine. Apologies for the dark pics, too; I will discuss this in a later post, not about the pics, but pros and cons about this particular project. 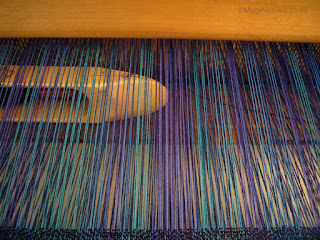 On a foot loom I press the pedal which will raise selected shafts while leaving the other shafts down. On a hand loom I lift levers by hand to do the same. Then I "throw" the shuttle between the lifted and as-are sets of warp threads, e.i. the shed. (Some shuttles you can't throw so you gingerly pass from one hand to the other.) With this project I'm using an end-feel shuttle, which I usually use sideways. Can you see the black weft thread coming out near the right end of the shuttle? 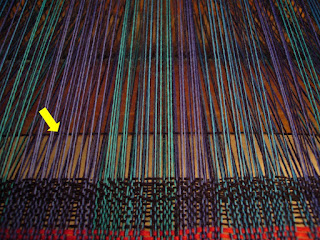 There it is, the black weft thread left after the shuttle has existed left from the shed. 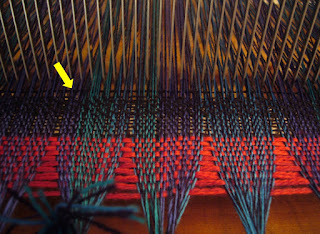 I bring forward the reed and push the weft thread in position. In this project this weft will come slightly more forward, leaving, ideally, the same gap as between previous wefts in the patterned, (rather than the plain woven,) portion.

That's it. Sample weave or weaving proper, I repeat this as many times as required by the length of the piece and size of the weft yarn more or less.

I began the warp post with a non-weaver reader in mind without intending to show the entire weaving process. After I weave I might twist fringes and "wash". Unless I have new ideas or good pics, this is the last of the process series.

My big loom has a weird/unique setup because it was a locally made/reconfigured computer-controlled dobby. If you're curious, I have recorded it before, so knock yourself out. :-D
Posted by Meg at 2/06/2020 10:23:00 AM