I'm trying to assist a weaver in Melbourne restart her system which is even more complicated than mine. Hers is a Le Clerc loom retrofitted by Mr Throp, and our loom boxes are different. Anyhoo, I took some pics of mine to see if she can get a sense of what she needs and how the boxes are connected. It's not a pretty picture, but lacking new pretty scarves to show you, I thought I'd post them this morning. I drew a diagram so she'll know which pics show what, in very hard pencil, and had to enhance the pencil lines artificially. If I want to do a good job of something, I really shouldn't start at 10.30PM on a Sunday, really... 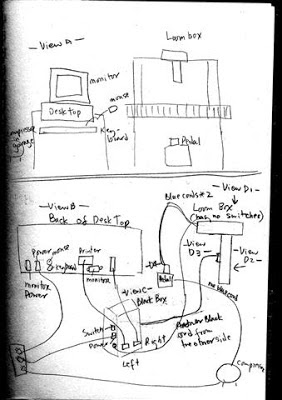 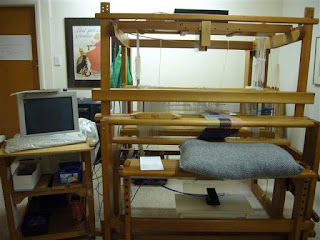 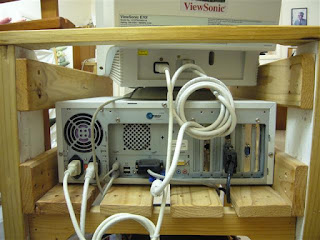 Back of desktop - so many cords! I used to put my draft, converted into a lift plan WIF,
via a diskette from the front, but now it goes on a stick and fed from here. 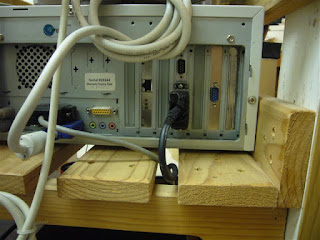 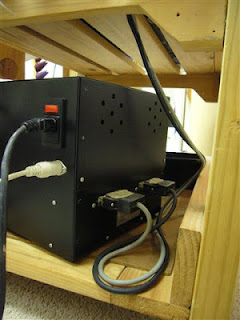 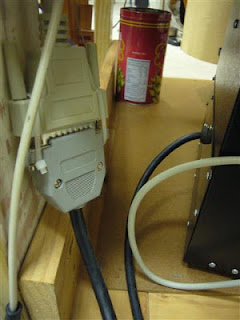 Lift plan WIF data translated into ... lifting action??... and comes out of an inconspicuous hole and 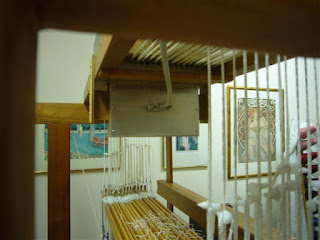 feeds into the bottom part of the loom box, 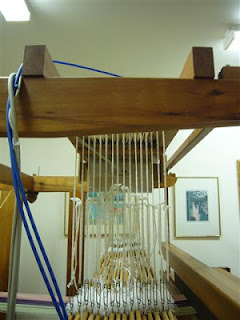 Which selects which solenoid, (i.e. shaft) is lifted in each pick. 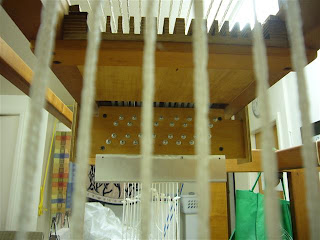 Bottom part of loom box from the right.
There are two screws that corresponds to each solenoid/shaft. 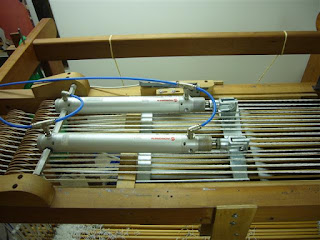 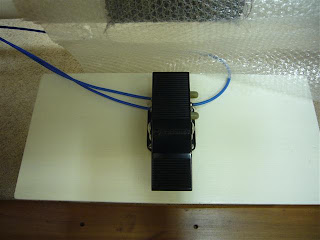 One last cord connects the pedal to the air compressor in the garage.

I've only seen a purpose-built computer-controlled loom in person once, and I wasn't paying much attention because I was in awe of its 32 shafts. But my peripheral understanding, (you know, one glance and you pick up information you didn't know you picked up?) tells me it didn't have a black box and the computer connects directly, (i.e. physically) to the loom box. Many weaving software has loom control codes for major manufacturers' looms, so the draft data doesn't have to go though translations/conversions, either. (This happens after I finalize the draft on my laptop before I feed the draft into this loom computer. I need to convert mine into a lift plan WIF, and because of an unexplained anomaly, I need a blank pick line at the start because the shafts don't life on Line 1.)

The 32-shaft I saw didn't need an air compressor, which is a distinct, understated, (get it?) advantage. Having fewer conversions and connections reduce the number of potential problems and my feeling is when problems occur it's easier to track down the cause and solve it on a purpose built machine. And this is why I live in fear this whole setup is going to come crashing down on my because a wee bit of wire wears down and it's so tiny we can't locate it. Or there are no more old parts. (My conversion software requires an old OS so we stopped upgrading after Windows 98.) My previous owner had to vacuum a particular the top part of the loom box often, she told me, but I've not had that problem. Maybe I don't weave as much as she did.

Just last week, 11 kept lifting sporadically when it wasn't supposed to. I couldn't figure out the conditions that made it lift. After an afternoon of investigation in the middle of a cashmere scarf, I found two heddles on 10, the bottom of which had not be cut cleanly, created a tiny loop that picked up a hook at the bottom of 11. So when 10 was up, 11 went up, too.

Have you posted photos of how your computer-controlled is setup? Have you seen photos of a purpose-built setup somewhere explaining how they work? It'd be interesting to see how much simpler they are.