I'm such a single-tasking simpleton, I think I could be a good gardener if I didn't weave. Or a good cook if I didn't weave and didn't garden. Or I could do none of these and study and get a higher degree. Or read.

I've always known about my single-minded nature, but weaving is what I've chosen and I've focused on it to the exclusion of everything I could exclude in my life at one point. But food, cooking, heath aren't mere hobbies or interests; they are, ummm, life, and I can't feel good about being a bad cook even if I somehow decided I'm a great weaver, the latter can't make up for the former.

I'm slow to understand things. I need to read things many times and I need a lot of practice to get better at things. But I don't like practicing. I'm also lazy.

EDIT: This is a stage I wouldn't mind getting to, but it's a scary prospect, too.  It's a dangerous territory for us Lazies.

I'm amazed how much I'm enjoying cooking. I go in spurts being interested in food and then not at all, but I'm trying not to overdo it so that this spurt will last longer. And because we don't use as much oil or cook starch, washing dishes is fast, requires less detergent, can be done in cold water, and in this heat, it's a welcome task. I'm also pleased how quickly we got used to smaller portions, and not having much meat/fish/starch or any alcohol wasn't a choice but something that just happened. Again, I think the heat helped feeling very satisfied with salads and other vegetarian dishes served cold, and fruits.

We have no intention of becoming vegetarian; I would never even contemplate depriving beloved of bacon, and I would feel very sad if I were to never have smoked salmon again. And we love cheeses. But even our other dairy consumption has decreased. It'd be interesting to see what happens when the climate is kinder.

Even Ben started cooking and serving small portions and we don't go through as much food. Who knows, we may be rich next time this year!

Have I mentioned the heat yet? We have been having a heat wave. Just last week Nelson was astonished to have 20C at 7.30 in the morning, but we had a blustery, glare-sunny Christmas Eve with our shady cold house 28C in the early evenings, and right back to 28C at 8AM Christmas Day with no wind, just glare, still 30C at almost 1AM. Nelson doesn't get this hot, at least this early in the summer. Our house might get up to 25C once or twice a year for half a day max in late Jan/early Feb.

Boxing day, yesterday, was cooler but much more humid in spite of a Heavy Rain forecast. Goodness me. I didn't want to waste another day looking at multiple screens imitating sloths. 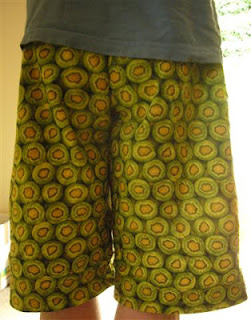 I sewed a couple of Heat Wave house pants/PJ bottoms for Ben. He has no heat wave clothes, and was quietly suffering in thick synthetic long shorts, and I've wanted to make these crazy pants for him for years. I made a few mistakes so two pairs of the simplest PJ bottoms took a little over half a day and I didn't have time to go downstairs to finish what I wanted to, but I'm pretty pleased with these, and I'm going to make a couple of more today. None as funny as these Kiwis, though.

I wish I were better at sewing. Like knitting, the logic and mechanism of construction has fascinated me since Fifth Grade, and I enjoy reading about pattern construction and sewing techniques very much, but my delivery is "Good Effort" at best. Some parts, it's better if you don't look closely. But I like the idea of making something nobody else has, altering patterns or adding something to make things for Ben and me knowing there's something unique, (at least un-usual, as in not standard,) about it. And I keep hoping many practices will make me better. Automagically. Without effort. Only fun.