By which I mean, abbreviated, "therapeutic", for-the-record snapshots of my life of the last wee while, stuff I jot so I don't forget how I spent my life.

On the whole we've been having a cool, comfortable summer in Nelson, although windy and dry most public reserves are now closed. We worked in the garden a bit, (well, a heck of a lot for us,) during Ben's summer holiday, so much so parts of our place are taking on the appearance of normal neglect as opposed to... forsaken chaos. I do wonder, though, we host a lot of bugs and even some birds in our weeds and after pulling them out, trimming and pruning "proper" plants, the ground is just dust. Convolvulus come through 50cm of mulching, (we usually dig it up,) so it's hard to know what's good in the long run on a macro scale.

The irony at Chez B&M is in dry years I am conscientious about watering pots with shower and dish water, so them babies are looking good. After years of combating bad bugs with home-made remedies and icky stick plastic things, I started fighting them with their natural predators; eggs come stuck to a tape you can hang from branches. This should be an interesting science experiment, although the first bugs I bought were bees smaller than sesame seeds so I don't know if I'll see anything.

Post elephant blanket, I haven't done anything with textiles as top priority. I've continued to sample the grownup blanket as you've seen; ruminated on how to approach "Syrie" so the process is as exciting to me as the finished product satisfying, (ongoing;) started/restarted one knitting project nearly three dozen times until I finally settled on a design, size, etc. 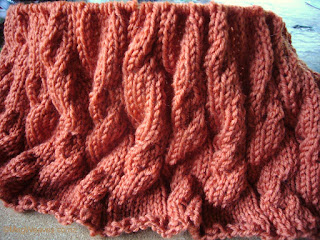 At first I thought this would be a gigantic cowl, but looking at Pinterest, it's more a generous medium-size. The yarn is merino of unknown origin from Mom's stash. One of the difficulties I had was this is proper "fat" knitting yarn, and because I'm used to weaving yarns I couldn't get my head around the scale. It is relaxing to sit in the rocking chair in the evenings knitting; I can justify having silly telly on.

One thing that's sure to come back to bite me is the craft shop carrying DMC needlepoint yarns closed around Christmas. I knew this about a month ahead and intended to plan at least one more project and stock up, but when the time came I had no idea, so I didn't. I don't have enough left to do much of anything. I'm not giving up needlepoint as it's enjoyable, but I don't mind sticking to more tube- and rectangle-knitting for a while.

I haven't drawn, collaged, or printed, but again, not giving up. I have a Sketchbook Project due August, and I've had this seed of an idea, something in a concertina form, but I have to "see" it better before I can take action.

Then came the new year resolution. I love numbers like 2020 and desperately searched for a plan, a project, a goal, something, for the year or the decade, nothing grand but dodable so I can look back and see what I accumulated.

Nothing. In desperation, I decided to read two books a month. Simple enough, yes? Within a day, that morphed into "books or Shakespearean plays". Then I allowed cookbooks if I read them cover to cover, which I do. Then I thought finally taking on Vincent's letters - and how would that fit numerically into the 2 per month, or is it a different project? And should I be taking notes?

It's mid-Feb and I haven't finished one book; I started Romeo and Juliet before a local production but didn't finish; and I started Vincent's letters, dedicated a notebook, but haven't restarted. So, yeah, the resolution is going great. What's nice is I've finally become that person who doesn't feel defeated just because I've mucked up at the start. If I pick up any of these plans, I'll have done something, and that's better than nothing.

Just so you don't think my life has been devoid of "culture", I have been watching vids and listening to audiobooks and podcasts, almost anything relating to Shakespeare/Mark Rylance/Ben Crystal, history/archeology especially those by Tony Robinson, or revisiting Terry Pratchett stories. I know, lot of UK stuff, but, ahem, they make them in English. I'm also seeking out Cezanne's writing this summer. None of these have come to bear any fruits in a creative way, but then I'm a slow learner. We're approaching the 20 year mark since I took my only color study course, and finally I'm starting to see unexpected things happen on the loom, so stick around and be prepared to be floored by the time I'm... 81!

Speaking of not being defeated, I said I'm going to concentrate on the things I do well/enjoy, not the things I should do better but can't: technique.  Laura Fry followed immediately with this, (not claiming causality), she's also talked about unwillingness to learn/change in subsequent posts, and while I wholeheartedly agree with her, and the convent school/Japanese/my-parents'-eldest part of me feel guilty, I also don't want to stay tangled up in other people's expectations and desires, which I've done most of my life. So I'm sticking to my comment to her: "That's me! It's the yarn, the loom, the short body! And I'm thinking of declaring statute of limitation on my improving techniques, and using "self-taught" as an excuse." It's not a personal feud with Laura, but a reminder to myself I need to grow up, and "statute of limitation" sounds apt. Also true, the less I worry about my technique, the tidier my weaving appears. Or that's the story I'm sticking with.

I struggle with pricing, and went to Stella and Thomas to unload. It was the day I handed over the elephant blanket and went to see some collages they recommended. They told me pricing "art" involves everything that happened in the artist's life up to the point a piece was created, because every experience is a build up to the realization of that piece. Or something to that effect. I thought of how I make my stuff, and fumed once again about the prejudice against "craft". The price of my blanket that took months to make vs two A4-size collages, albeit nicely done and framed, for the same price. Wouldn't you know, this got me nowhere. Besides, I and only I am responsible for my pricing.

And there you have it. I don't know if you remember, but watches and clocks used to need winding regularly. These posts give me similar satisfaction of regular resetting/maintenance done in time, small stuff, but virtuous nevertheless.
Posted by Meg at 2/12/2020 11:40:00 AM