We're back to normal transmission, and you know what that means; I'm sampling a lot and trying to figure out what to do next. What I can tell you is I'm not going to weave an adult couch blanket on this warp, but will sample lots, (because this 2/30 count merino is still new to me and I'd like to learn more if I am to make it more or less my default wool warp,) and hope to weave two or three scarves. So, with no particular logical construct, I've been toying with these ideas. 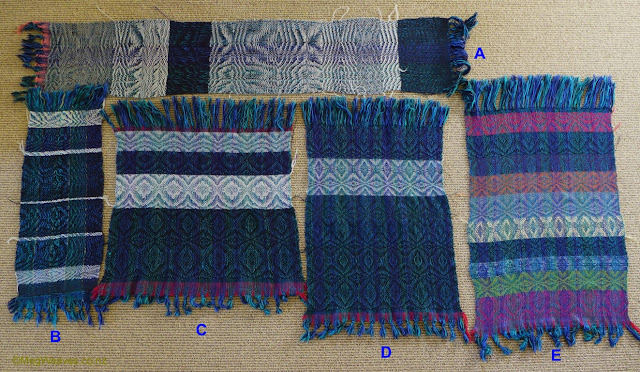 A and B were threaded at whim, setts between 36 and 54EPI in pairs and triples on the Kilck, woven with all kinds of merino and cashmere wefts. C, D, and E were woven on the big loom, C in 36EPI, D and E in 48EPI. The colors are little strange in this pic possibly because I took it in early evening light; we still have sunlight until 8.30-ish, 9-ish at the moment.

I don't like the warp color distribution, the way/places/proportion I split the "pointed" threading to include three colors in each repeat, moving from a-b-c-b-a to b-c-d-c-b, etc, the main reason I decided not to weave the blanket. At the moment I am thinking of a more gradated look for that project. The client prefers a tighter, symmetrical design, so none of the swirly stuff as in A and B, either.

Even with the same sett and yarns, samples woven on Klick always washes up softer than from the big loom, or the big loom yields sturdier cloth. In A and B, 48EPI looked nicer and felt "fuller", but I first sleyed at 36EPI for C for this reason. C's texture is OK; nowhere as airy as I expect, but nice depending on the weft, and preferable because this is not a small piece near one's face but a large couch piece.

Between 36EPI and 48EPI there's quite a difference in the visual saturation/concentration of warp colors, i.e. sleyed at 36EPI the colors looks perfunctorily diluted. On the other hand, I like the size of the motifs, visible from across the room, and to that end, 36EPI is good. In fact if I were to weave at 48EPI, I will need four panels rather than three. Interestingly, even with the same yarn, 48EPI produces cloth with almost a wiry feel because of the closeness of the warps; I hesitate to say the merino doesn't have enough room to full, but for now I can't think of other reasons. Neither did it produce the heft I expected.

One easy remedy is to edit the tie up, reduce interlacement and use longer floats. I tried modifying the draft for a couple of days but the design looked so diluted I didn't save any. I can also use a skinnier weft, which will require much longer to weave, but it is a possibility and I will probably prefer the appearance. (Another surprising thing about this draft is, B-side in the cloth is unappealing, but I haven't spent much time reviewing this aspect yet.)

I have nicer yarns in whites, naturals and grays, and I don't like weaving with black, so I automatically sampled with them at first, but then the client suggested black. I don't have enough of my best merinos, but I found an airy probably-lamb's wool in a perfect size with dull sheen, which contrast well with the surprisingly shiny merino warp. With the black weft, I can't see the patterns while I weave, but the depth the colors create is much more striking in comparison to using lighter color wefts, and sheen contrast makes the design "pop". So much so I can't even look at parts of the samples I wove with white or gray wefts, even though they feel fluffier. They now seem so pedestrian.

But even with good merino or cashmere wefts, the most surprising aspect of these samples has been their underperformance in the texture. 36EPI is the same as in the elephant blanket and that piece has quite short floats, so this puzzles me, and I have an idea. More below.

The blanket warp will be in these colors, in a more gradated progression, in a similar but probably modified draft, with black probably-lamb's wool in the weft. Unless... I go with a slightly less airy, slightly shinier, dark saturated navy blue wool weft; the value to black is so close it's hard to tell where one sample ends and the next starts, but in this context, if I nitpick, I sense the addition of the blue hue creates better harmony as opposed to black showing contrast. It's really hard to see even in real life and since the client is a big softness fan, I'll probably go with the black, but it's worth mulling over. 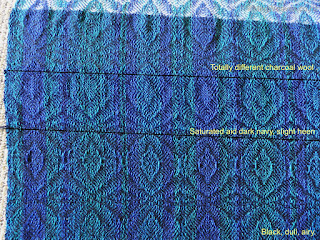 Moving on to weft candidates for scarves from this warp and mainly Sample E: 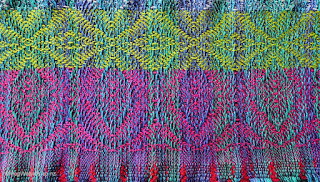 Same merino but used single, (remember the warp ends are doubled up so they move in pairs,) in hot pink, and saturated yellow green. The pic doesn't do justice but I'm smitten by both. The pink hue meld right into the blues and greens and create a deeply satisfying new "color" that increases my heart rate, and I'm definitely weaving a piece with this weft.

I'm not a green person but I have been mesmerized by what yellow greens do. In real life the weft is a dark, saturated yellow green, so unlike the strong yellow it appears here, and the last of a discontinued color. I also have the new color which is lighter, more yellow, but still not as yellow as in the pic. I might audition the new color; I might weave a piece with one of these colors as well. 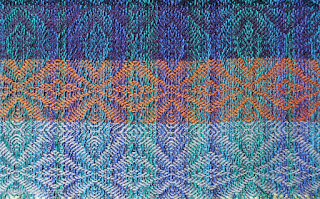 Same merino, from the bottom, pewter, (a loud mid-gray?) orange, and dark berry. This pewter is one of the examples of how a totally different hue, (or lack thereof,) kills the richness of the warp and why I will avoid naturals and whites in the weft in this series even if they full better. I had to sample pewter because this produces the nearest color to the cushion cover from the client's living room where the blanket goes, but it's not happening with these scarves. The dark berry at the top is OK, it's like the dark navy wool above; it creates harmony but not excitement.

The orange, (and it's not a sad, not "rust", as seen here,) in this context creates a lovely mild-mannered cloth, making us pay attention to every one of the warp color, and unifys without overpowering, as opposed to the pink making the colors pop. I think this one is a must as well. 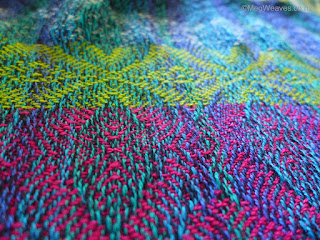 Giving space, the skinny merino does full, so I'll make better texture by editing the tie up here and there. 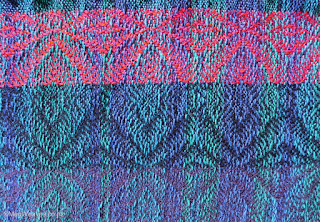 The colors look faded here, but from the bottom, merino dark berry single you saw above, another sampling of the dark navy unknown wool you saw above, and then on top, I doubled the warp merino, the hot pink and a cherry red. Both the warp and the weft  a pair of yarns act as one. It gives a meatiness to the cloth, i.e. better texture, but I don't  know if I can't decide if the design is diluted or emboldened, because of the thickness of the weft. I could do interesting things with colors this way, though. 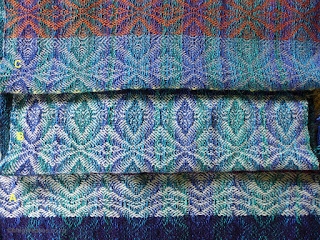 This is the texture "conundrum". A and B are the with-scale 76/2 merino, A in 36EPI, B in 48EPI, C is the pewter you already saw. A is sufficiently meaty but not as fluffy as I expected, B is almost choking and wiry; while C feels i has enough space to spread around and fill in the gap, and as far as textures go, C is the most satisfying. Like the 76/2, cashmere did not full to its potential; without more experimentation I can't tell you the exact best formula, especially because specs here aren't as different from the elephant blanket. Interesting, eh.

Also, do you agree with me that bringing "unrelated" (or absence of) hues in the weft kills the warp? 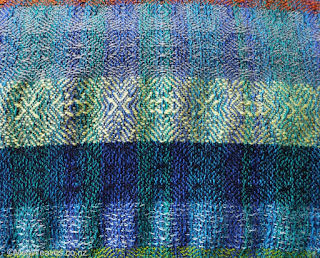 Some sampling from Mom's stash, and here I'm showing you the less exciting B-side. From bottom: blue-to-white variegated 100% mohair from France, (variegation not suited to this warp;) lovely navy blue silk/wool mix, (texture, coarse;) and a creamy yellow kid mohair/lambs wool/silk mix from Germany, which surprised me. I wanted to show you the B-side because unlike the merinos and cashmere underperformed, this yarn pry-opened every space it can find and fulled nicely all around, creating a lovely thick fabric. Like the white wefts, it doesn't show off the warp colors in the way hot pink and orange do, but it's not bad in a more conventional way. The texture of the cloth more than makes up for it, so it will remain a contender, especially if I get sick of slow weaving with the skinnier weft. I also included the pewter portion to show you how boring the B-side is, and how the design shows up differently.

In a more general sense, here are some of my problems/focus/directions:
* I'm focusing on merino at the moment and for that, texture is paramount. (Also, the blanket client is as much a softness nut as Mom and the blanket is where this warp started.) If I were to focus on colors more, I could easily play with 2/20 cottons as well. Now, what do I want to do with this scarf warp? It's been a dry summer here and even though I use oils and moisturizers religiously, my skin is not sensitive enough to detect fine differences in textures at the moment. I keep changing my decisions for best texture, but I also want to start weaving.
* If I like the look skinny wefts crate, which I do, I could also dig into my silk box. Texture then is less important, and I could play with sheen, although I probably have far fewer hues.
* Although I still have loads, I am approaching a point where I have far more of Mom's wools and silks than my own, and hers is... let's just say an eclectic collection in size, color, fiber, origin, whatever-else-you-can-think-of. I can only hope there is enough of each to sample, (there usually isn't), which makes it all the more important I get to know and start to feel comfortable with this merino warp.
* I'm really enjoying experimenting with colors. At the same time, I want to weave this very draft with only one pale baby blue and white, kind of reminiscent of ceramics.
Posted by Meg at 2/11/2020 05:38:00 PM