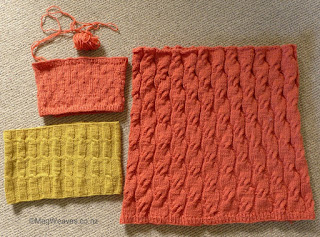 The small cowl took half a day, and it's a perfect size, with a lovely texture, in the same color as the big piece. But what was I thinking aiming for a "subtle" cabling?? I know; I wanted to contrast it against the big piece, but still... I haven't decided if I'm going to keep it or undo/redo, or repurpose the yarn, but not a big deal because it needed only one ball. If I decide to keep it, I am thinking of unravelling the earlier yellow cashmere version, with a fabulous hand but a circumference too large and texture too floppy it does nothing as a neck warmer. 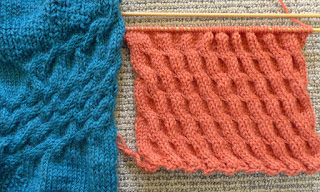 I thought about what to do next all day, but came evening and I was so keen to keep knitting I started an orange scarf on a whim. I have six balls left, so without unravelling the new cowl, I should be able to get a good length. The sample came in handy-ish in that I found the wavy bits attractive but I couldn't figure out exactly what I did; the progression in the sample wasn't consistent; I wanted the diagonal lines to go the other way, (I find it easier to "rest" (??) the stitches in front rather than the back;) and the orange yarn is slightly fatter and recommends using #5 while the teal, slightly thinner and #4. Anyway, I still like the teal patter much better, but as a scarf, the orange will be soft and warm. Probably. Hopefully.
I am now thinking seriously about a sample with notes, but not with either of these yarns as they are too nice.

Sunflower: I got tired of the bad tension so I cut off after about 65m and unwound/rewound. Theoretically there is still enough warp for one scarf. You can see I'm limiting the hues; true colors are somewhere between these two pics. 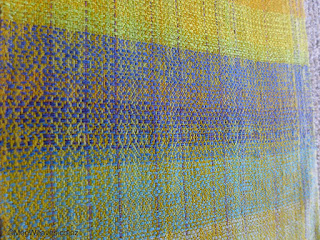 The darker blue parts show where I put in two pattern wefts in slightly different sheds to every tabby pick. 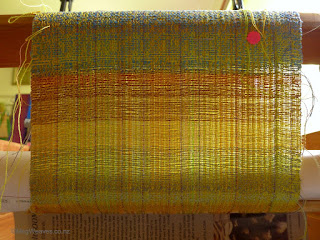 I'm sticking to similar hues but the warp tension is only slightly better so Sunflower is destined to be a scarf for me or fabric scrap.
I have two important things to consider regarding weaving on this loom. The first is, as much as I love being able to walk into the stash room and weave any time, the room has terrible light, natural and artificial. While the latter can be improved, yarn colors are accurate only from when the sun hits the window, (mid-morning this time of year and much later, later,) for a couple of hours at best. I often notice while weaving later in the afternoon that I am not looking at the colors on the loom, but weaving from what I remember, and not exactly how I like to work. Although it has produced some unexpected combos in the sample. The second issue is tension while putting on the warp. I can't remember what I did a decade ago, but recently putting the loom on the floor and dragging the warp on the carpet under books has been the default; it doesn't seem to work the way I'd like, in part possibly because the loom can move easily while I wind. A third issue, lower on priority but possibly a worthwhile investment, is to swap heavy metal heddles with large eyes to texolv so as to possibly reduce cotton fiber rubbing against metal. I haven't been able to gauge exactly how much damage occurs at the moment, but there is a lot of fuzzy bits under the loom, caused both from the heddles and the reed, I presume. 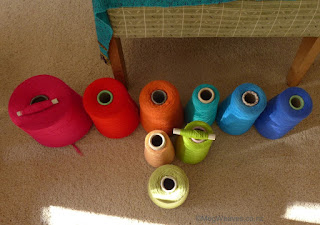 Sunflower was supposed to be such a fabulous project but it's turning to be a pain. (Although if it turns out to be a teaching warp, that's good, too.) I decided I'm not putting on a new warp anywhere until I finish the purple warp on the big loom after this, and revised the warp colors.
Posted by Meg at 4/26/2021 02:39:00 PM