How I Make a Shawl - Part 3: Dressing the Loom - Though the Heddles 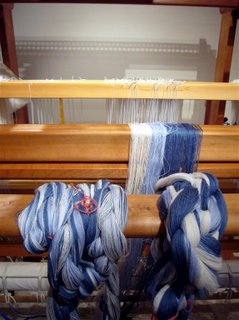 After making a long warp chain and transporting it downstairs, I secured most of the chain to the front of the loom, and stood in the space behind the heddles and shafts, in front of the back beam, and one by one, threaded the warp threads in to the eye of the heddle on the appropriate shaft and in the planned order. 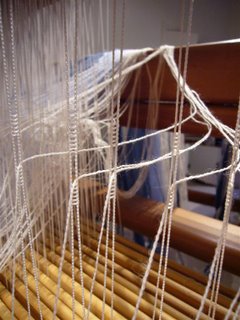 Heddles are the white string-like things with an "eye" though which normally one warp thread is threaded; every heddle is held by a shaft or a harness, (the pieces of wood at the top and the bottom on this loom); each set of heddles on the same shaft behave in unison. 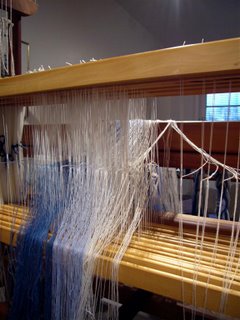 Now, weave structures (or patterns) are created by selectively lifting (and on some looms also lowering) shaft/s so the shuttle and the weft threads can pass through some lifted and some not-lifted (or lowered) threads. You could say that the threading (first thread on the left is threaded on Shaft A, the next on Shaft B...), and the lifting of the shafts create the structure. I know it's getting a little technical, but if you see them in action, it's rather very simple.

I have 16 shafts on this loom, but usually I save Shafts 15 and 16 to weave plain weave on the two edges so I don't have to worry about the weft slipping at the edges, leaving me 14 shafts to play with the weave structure. Because I want to test several structures and weave at least two shawls, I threaded this warp in the simplest and most flexible threading, the straight draw. So, working from behind the shafts, the first warp thread (which will be on the far left when I sit in front of the loom to weave) was threaded through the eye of the heddle on Shaft 16, the one closest to me; the next, on Shaft 15; then the next 494 threads were threaded in shafts 14, 13, 12, 11, and so on to 1, and resuming at 14. The last two, 497 and 498, were on Shafts 16 and 15 again.

Threading the warp threads through the heddles is a simple task, but if mistakes are made, correcting the threading can be annoying, so I prefer to work on only 200-300 warp threads at a time. For this I warp, I worked two afternoons (when the light was better) to thread and check. 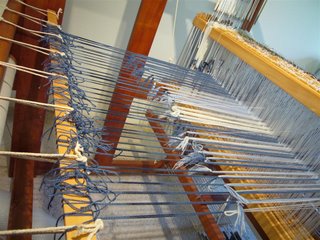 When all seemed good, I secured the warp ends to the back beam; because this is a large loom and the loom waste (the portion of the warp that cannot be brought forward to weave) is great, so I added a little bit of what I call the leaders in the end.

The two white threads appearing above the rest were threaded not in the eye, but the space above by mistake. This needed correcting before I could wind the warp onto the back beam.
Posted by Meg at 12/07/2006 12:29:00 PM