Making of an Exhibit - Part 2: Exhibit(ion) Shawls, My Shawls 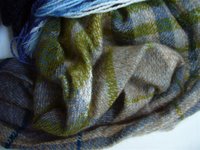 Preparation is time-consuming; weaving is quick. After much thinking and worrying and finally getting a warp on the big loom, I completed two shawls in three days, neither of which I am crazy about. And I have been wondering why I am so tired and so grouchy.

Fundamentally, the kind of shawls I like to weave haven't got a lot of colors but more like nuances: I use the subtle differences of the color or sheen in the warp and weft to highlight the weave. And these two pieces I've finished don't do that. In fact, rather than spending time to design a twill to show waves and water and sand and grass on the dunes, I'm downloading handsome weaves and sampling them one by one. I've been working with concepts trying to make pictures and not doing "my" weaving. At this rate, I won't be showing my best stuff.

On the other hand, these two suit the theme and make good fillers, and by that I don't mean these are inferior, just not to my liking. I know it's good to extend oneself, and I am doing just that. And in the end, I can never tell what you like.

So for the next one or two warps, I'm going to use one color in the warp and do my thing with weave structures, and get it out of my system. At the end of this process, I should have accumulated about half a dozen, at which time I can decide if I need more of "my" kind of shawls, or the "conceptual/pictorial" kind, or if I have the energy and guts and time to try to combine both.