Life has been a bit different of late.

Not only has Mom turned into Dad's full time caregiver, (and thanks for your emails; dad isn't in that bad of a shape, but his life is very limited and he needs Mom around all the time); I the housekeeper, and Ben the cook and handyman.  Ben has extended his stay by a week so we can fix everything that needs fixing around the house and get it really ready for winter, and me by four; I might end up staying longer.

So, not a lot of outing for the two of us yet, but we've been photographing nostalgic shopping streets reminiscent of the 1960's near my parents' house, which has been great fun.  Next week, we hope to go to the one near my folks' first home, where we lived until I was 9; that street, though very cramped and dingy, is thriving and was featured on a TV show a couple of nights ago. 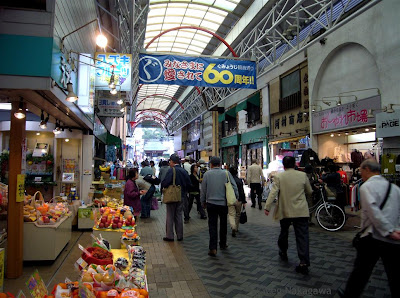 Traditionally, shopping streets sprung up on the side of main highways and on the sides of the streets leading up to temples, shrines, and other "religious" sites.  I wonder if you can see the green roof of the gate to this Buddhist statue. 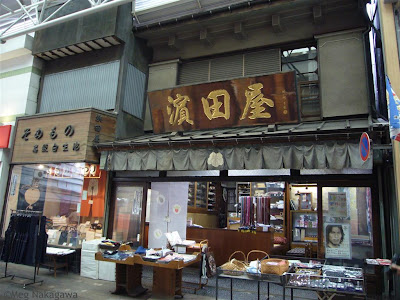 As in many areas of the world, folks used to have a shop on the bottom floor and live on the top.  This is an old kimono shop, both selling kimono and accessories, but also offering to dye/redye kimono and fabric.  On the small section on the left, you can still buy undyed kimono silk and request special dye work.

Though these shops are separate buildings, many shopping centers covered the street section in the 60's and 70's; most allow vehicle traffic, but this street allowed foot and bicycle traffic only.  Lovely.  There were also many food shops that cooked what they sold on the premise; I might go back and photograph two tofu shops, my favorites. 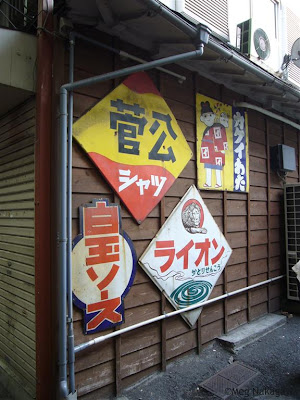 Metal product advertisement popular in the 50's; these were often nailed on the side of shops and even some private homes.  At least one of the products here is still alive and well, I think.

We did endeavor to go to an exhibition of Mingei craft pieces collected by Yanagi Soetsu, but I was exhausted just making my way to the department store, (my hometown of Yokohama has the population the same as whole of New Zealand, and just making our way across Yokohama train station, we ran into about one-third of them!) we checked the gift shop, the catalog, and the exhibition end date, (December 4) and went home!!

But don't get me wrong; it's not been all work and no fun.  For one thing there is Internet at the parents' house, and Mom and I have been discussing and planning her hitherto biggest project, a simple garment.  It's one that requires two rectangles, but Mom knows sewing and knitting, and she's been considering neck options as a good warm collar is important in this project.  We've cut out crude facsimile pieces out of old fabric to fine-tune size, but there is a lot more to consider.  I always knew Mom is a much more versatile and adventurous weaver than I, and it's been fun planning.

Because she teaches weaving to neighbors as well, only a rigid heddle is available for use right away, so I'm thinking of doing a hand-manipulated loopy thing on a small scarf, too.  More on these later.
Posted by Meg at 11/12/2011 07:22:00 PM