We Hang in a Month

Installation is September 30. I've been working furiously during the day to try to get as much done, and totally blobbing out in front of the TV and/or computer games at night. Our entire house is littered with my stuff in various stages of done-ness and Ben's not allowed to move anything.The second hot water cylinder was "fired up" yesterday for the first time in... oh, I can't remember. 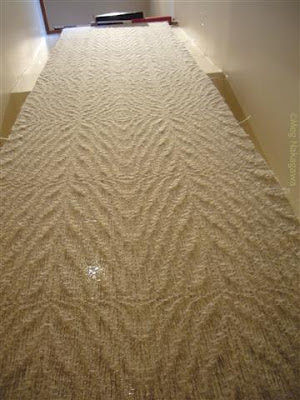 This is Pillar 1, (or the top three-quarters of it,) the component closest to being finished among all my stuff. It's big in my house, but skinnier than I had envisioned, and I don't know if four of these are going to make an impression in Refinery's huge gallery. I hope to wash P2 today; P4 is half woven, but I haven't made up the draft for the top half. (All pillars use the same draft for the bottom half, but variations on a theme for top.)

I'm very behind in the Self-Portrait, but this one will be quick to weave as it is so small; I am making some progress in practicing the double weave with inlay for Friends(ship) but its design/draft is predicated on Self-Portrait, so I know which one I need to furiously work on next. 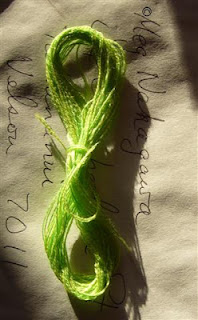 Here's a wee thanks to Esmae Emerson as the last contribution to the Friends(hip) piece. She also called my attention to the fate of "the one in Milton" weavers always think about when we hear of mill closures in New Zealand: November 2011 and May 2012. Small victories, yay!