This is an edited excerpt (is there such a thing?) from an email I sent Cally this morning:

"When we were younger, we, Dad included, thought “dying naturally”, “of old age” sounded so pleasant, easy and graceful. It turns out that's not always the case. Dad is not “ill” per se so the hospitals can’t keep him for “treatment”, nor do we want him stuck there for too long. I would have never used quotation marks around these words before my previous visit, but I now know these are social constructs! For whatever reasons, (much drinking/smoking, bad food choices, and most notably, his age of 85.5 years,) have worn his organs out and they are struggling to do what they were designed to;

"So, not sick, just organs exhausted, whether he feels it on the day/moment or not. This frustrates him and puzzles us. Among his complaints is that doctors concentrate only on medical issues but not on the person or quality of life, but in Japan there are no geriatrics as a discipline, so as a consumer of medical care, he and gazillion other oldies must rush from one specialist to another, often from institution to another, to have specific symptoms seen to. Unless/untill they are so disabled/feeble/far gone they must be institutionalized in "geriatric care" facilities;

"I keep trying to imagine what it’s like for Dad and rather disturbingly this is what I can related to: say I have a five-year-old laptop that works great for me; I’ve got everything I need loaded and nothing I don’t need; hard drive has been cleaned to the best of my ability though over a year ago; and a tiny part starts to fail and it is no longer manufactured. I learn to work around it but it annoys me, worries me on bad days, and ad-ends work from time to time. Gradually I learn to live with the diminished capacity, but still can't do without the laptop. Then goes another part. In Dad’s case, there are several glitches on the motherboard, a few parts that fell off, and corrupt segments on the hard drive, but on the whole, it works more than fails;

"I had to give up my five-year-old laptop a few years ago; the one I'm using now is faster with a much bigger hard drive, but for e.g. DVD viewing on the old one was much nicer." 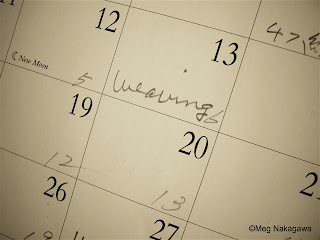 It’s Wed morning here and I leave next Wed afternoon. On the day I extended my stay, Mom wrote the number of days I had left with her. She also asked me how I make my ragù and to tutor her on moving from 4- to 8-shafts. I was thrilled with the prospect of Mom & Meg time! I wrote down the former (hard, eh; I don't think much when I cook,) and we got the ingredients, but she was going to give the lot to the home helper, so I cooked instead. As for the latter, I don't teach and I don't write things down so I had to do some prepping but we did a couple of shortish (to me) sessions. She would most definitely shout out I'm being paranoid, again, but I can't help receiving mixed messages because she keeps going out, shopping, English lessons, doctors' appointments. There is no doubt life is getting in the way; her life has been dedicated to keeping us alive and the household going for... nearly 65 years. But I can't help thinking there is an element of her thinking she should want to do things with me, but for whatever reasons, (she gets tired, I'm annoying, she needs physical exercises,) can't be bothered or these are not as important as other things.

Donno. It's futile trying to figure out what the oldies are thinking at this point; I'm better off concentrating on what I can do to stop their environment from further deterioration, if not exactly improve it. 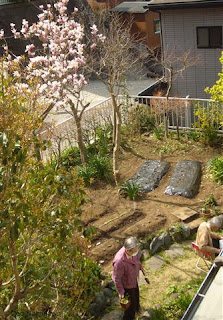 I bought the magnolia tree just before I got married or left for New Zealand, along with violet and pansy babies. Mom remembers me lugging home "lumber" though I thought it was more like a broom stick. It's been pruned several times over the years, I'm told.

For five weeks since I've got home we watched the buds come out and then grow bigger, but because of the weather they all came to flower in the last three days and already this morning started to drop petals.

The weather here has been positively crazy. When I came there was the longer-than-usual winter with hail and late but heavy snow. Then came March when one day the expected high was 6C, the next 14C. Yesterday it was 19C first thing in the morning and 28C in the sun room a couple of hours later and 26C elsewhere in the house, which is May-early-July temperatures. I had the window open until 11.30 at night. We've had very strong winds, Chinese yellow sand and pollutants making their way here; the forecast "severe" hay fever season has been bad, but will not last long as half the pollen have been blown in the strong wind in two weeks. And the airports have had a variety of reasons to cancel flights.

I don't need floods or locusts, but have most definitely requested a thunder-and-lightening show. 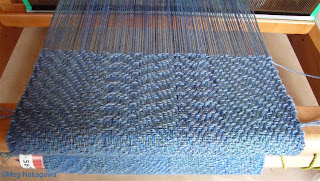 On "my" loom; a scarf for a gardener who wears almost only blue: a water-inspired networked twill threading, variegated wool/mohair in the warp, knitting wool in the weft, 20EPI, 3/3/1/1 twill. 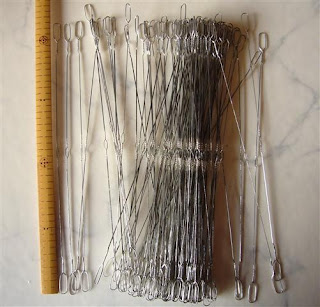 Speaking of looms, Mom found what we think are heddles from pre-texolve Ashford table looms. There are roughly 21.5cm long, and at a glance there are more than 30. She would like to gift them to a weaver currently weaving on looms that take these heddles in the first instance, and if not, someone who restores looms and have one that will take these. Please email me for more details.

There have been so much noise in my head I had to do something to calm down and prepare to go home to lead my usual, easy life. I don't know why, but I bought several Salman Rushdie audio books yesterday and am enjoying his memoir. Any of you know much about his writing?
Posted by Meg at 3/20/2013 01:53:00 PM