I'm leaving Japan on September 17, arriving back home in Nelson on the 18th. The South Island had better stop shaking by then; Nelson hasn't been affected much in the recent shakes, but Seddon (part of Marlborough) and Wellington have been, a little. And not around here in Yokohama, but yes further north.

I've tried to keep myself busy, weaving when it's tolerably hot (i.e. cooler than, say 32C?) in the mornings and up to a couple of hours. I've also dabbled in dying, using up Mom's gazillion dye stuff and scrap/leftover fabric. The first batch came out a fabulous indigo by mixing three partly-used Dylon tins, (more saturated than in this pic;) alas a color never to be repeated. The second lot, I mixed two blues and one green, hoping this, too, would turn out indigo-y but it was much greener. Most of these, I've twisted the fabric using chopsticks or rubber bands; instant, painless, but kind of fun. 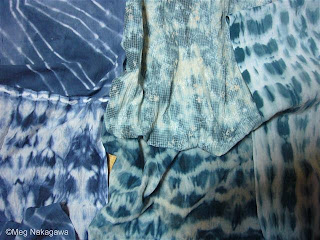 The one with the visible pattern was "natural" color with translucent check and floral print; I've always been interested in dyeing fabric with visual interest already, e.g. embroidery, nearly-invisible print, or different fiber contents, and this one worked well. I'm not sure what I'm going to do with all these scraps; I'll take them home and will make something; these are cold-dyed with fixative, left outside in the sun/heat in a metal urn for a day, and rinsed, rinsed, rinsed, but not exactly color-fast.

I've been stitching one piece of fabric for a while, (handwoven undyed Indian cotton check; stitching is a slow process, isn't it?). I want to dye it, take out/add stitching and dye again, and apply perhaps three colors. I'm not sure how it'll work out, but I'm trying not to plan/predict much and just work, as with my collage postcards. There is also a hand-woven plain Indian cotton shawl Mom was going to throw away; I saved this, too, but because stitching takes so long, I think I'll go with twist-dye.

I've been avoiding the "Cubism" conundrum. I have to go to Session 4 tomorrow, and I'm not sure what I'll do; I'll have to look over my notes and do some more practice tonight...

I went to a couple of interesting "art"/architecture places. The first is Maruki Gallery, of which I had never head until I learned of the Yamamoto Sakubei exhibition. It was out in the boondocks and with one big and one minor train accidents en route it took me six hours. But Marukis' anti-war (not just Hiroshima) paintings were SO big and impressive. I didn't like the horribly dark, (both visually and in theme,) Hiroshima panels, but sat with The Rape of Nanjing (right top) and Auschwitz/Oświęcim (second from the top) for a while; both had some colors and "space" where the eyes could rest rather than just be bombarded by painful images.

Yamamoto's coal mine paintings were registered as UNESCO Memory of the World a while ago; I only heard of Yamamoto a month ago. His work, along with several other painters and photographers, were more like picture records, brightly colored paintings/illustrations with descriptions of the mining process, equipment, social context, etc. He painted the same scenes over and over to improve the text and graphics. I've recorded a doco on Yamamoto I haven't watched, but I'm not sure if he considered himself an artist; I get the feeling he saw himself, a former miner, more as a witness.

I also went to this architecture park. A few years ago when Ben and I went to this museum, I found a postcard of House W7 to my surprise; it was just one of the many houses I walked past every morning on my way to school in the 60's and 70's. I love architecture parks, (Meiji Village is the most famous in Japan - I went there in the mid-90's,) and in the scorching sun I walked around and went into every house we're allowed to, for four hours. Not a lot of pics, I'm afraid; it was really hot and terrible, but here are a couple of storage solutions used in a stationary shop from the 1870's. 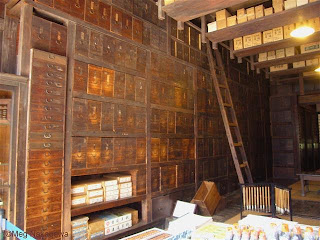 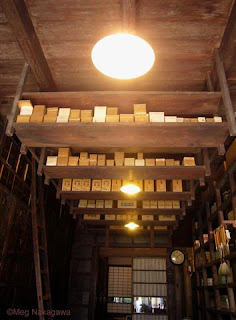 And the inside of a rebuilt public bath, the women's side. Mt Fuji is always on the men's side! 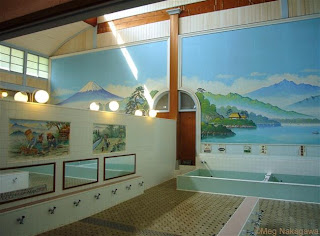 I've been reading about van Gogh. I got one version of his letters, in Japanese, but I found another, newer translation, and will probably get it before I leave. Then, at the architecture park, what did I find? 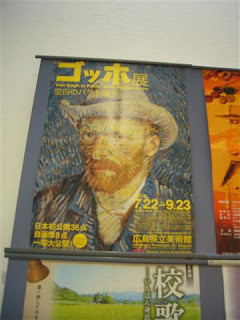 An exhibition in Hiroshima, 52 works, from his "missing" Paris years. Goodness, Hiroshima is, oh, perhaps five hours away from my house and Ben and I didn't go into the van Gogh Museum when we were in Amsterdam a decade ago because we were flabbergasted by the admission fee translated into NZ$. It was probably less than a round-trip Bullet train fair and one night's accommodation, but I'm going; it's less expensive than going to Amsterdam after the museum's refurbishment.
Posted by Meg at 8/17/2013 09:00:00 PM