By which I mean, since the second last post... But in no particular order...

Ben had a gum infection which first manifested itself as a headache, near-40C fever and shakes on the weekend. Luckily, his gum was inflamed by Monday morning so he went straight to the dentist, who prescribed him a five-day course of two antibiotics. (I've never two at once; you?) Things were iffy until yesterday afternoon but today he says he's well, and is back at work. Phew. If it's true. 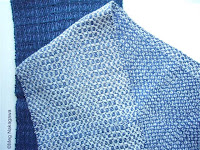 I finished my two navy pieces and dislike them. The main reason is the bad warp tension, which I was aware of winding and rewinding thrice on the soft loom sans a raddle with various ad hoc, not-so innovative tension systems. I wind back-to-front at home, originally because of how the looms are set up and where the space is in the workshop, but now out of habit, but I never realized how much I owe the humble tool that is the raddle. I've been genuflecting in my mind ever since.

Because of the inconsistent warp tension, I wove the two pieces under much lower tension than I normally would, (same cashmere yarns and the same EPI as home), and beat much lighter. All this, mixed with the drafts I concocted, (shafts lifted come in clusters, so greater draw-in,) resulted in selvages no self-respecting weaver would photograph or post; warped, "un-true" appearance of the squares of the design, and, get this, an staggeringly soft and airy hand that should come with all of my cashmere pieces. The teal weft is a much thicker cashmere, (I daresay of inferior quality to their other yarns,) which wove quickly and added heft; the contrast in the sheen in the blue cashmere and white cash/silk worked well. I'm trying to figure out how to keep this hand, while weaving unwobbly-ly (??) on my looms in the future.

I wanted to weave another with the Mame/Pea Shibori draft, so I tied my next, white, warp and am weaving with a light gray warp. My kind of combo. Plus, tying-winding gave the warp more even tension, so this one is weaving more quickly and evenly so far. I shall rethread to weave the Snowflake draft after this.

Forgive me, friends, It's been thirteen days since my second last post, and in that time I didn't weave or get involved with weaving much. And I blame the Cubism class, but more on that in another post as I have to figure out what I have learned and how to describe it/them.

I have been to a few exhibits and floor talks, read two books, and studied several artists' paintings in some details, (i.e. better than just glancing,) thanks to Amazon.co.jp's used book section.

By far the best, and so unexpectedly good, exhibition has been the Surrealism exhibition at Sompo Japan/Togo Seiji Art Museum. This museum was founded when Togo Seiji donated all his artwork before his death, which numbered over 800. Togo was famous in Japan in his lifetime, among other things for his female figures used in packaging for a Yokohama bakery, (the current one is "sharper" with more hues than the wrapping paper I collected in the 60's,) and later for his leadership in the Japanese art (painting) community. Sompo Japan, an insurance company, made world (art) news when they bought one of the Sunflowers in 1987/8 and this is what I wanted to see, but here, you have to go into the "main" exhibition at the end of which are their small permanent collection room. (Not sure why they don't show more of Togo Seiji paintings.)

So, Surrealism. Dali. Yikes. But their admission isn't expensive. I'll live. I thought.

I think Sompo aims to interest the young without patronizing them. The exhibition was organized by techniques used in the first instance, and by clusters of friends and regions in the second and the  blurbs on the walls were intelligent, informative, but not overlong. I was surprised how many Surrealist names I recognized, (Japan loves Impressionism, but we must, Surrealism, as well;) most pleased most of the artwork were owned by smaller regional galleries in this country, and that they had only one Dali as far as I can recall. It wasn't a big exhibition, but I spent two hours reading everything and trying to understand.

And then I sat and gazed at the Sunflowers for three-quarters of an hour. I don't know what it is about Vincent van Gogh's paintings, but I'm now "getting" that one can sit in front of one and be transported to an unknown place. There was a Gauguin and a Cézanne, too; Gauguin looked good from some distance; Cézanne was too dark and sad.

I was hoping to go see a fashion award exhibit near Sompo, but ran out of time and so I ran through the underground passages to get on the metro and get to 21_21 for a lecture.  It was supposed to be about colors, but in fact, was about how Vincent admired and copied Millet. Perfect for me; I jumped up and down in my mind. Coincidentally I had been reading a less convincing book on how Vincent admired Rembrandt and tried to "reveal the soul in self-portraits, like the older master, using different techniques." The author is a literature specialist first, and then a writer on Rembrandt, so I can't help feeling a bit suspicious he used the Dutch link to sell books. Old Vince has always been tremendously popular in Japan.

The third time I went to 21_21 was with Mom and two of her students, to hear Dai Fujiwara speak. He appeared to be a lovely, energetic man, but this was a exhibit tour, and having seen it in detail twice already, I didn't learn a whole lot of new or background stories. Still, it was lovely to be in the presence of the man who brought so many different techniques and people together. He stuck around for quite a while afterwards, but I was too chicken to speak to him. I couldn't think of anything. And I didn't want to ask a question for the sake of asking questions, you know. 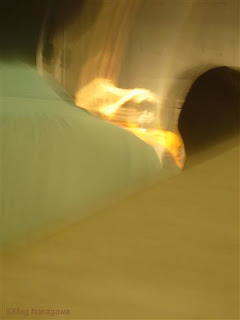