Not-Laharya: A Matter of Taste

I became less and less, (is that "increasingly less", or "decreasingly"?) attracted to the colors in this warp so it took me a while to thread. (Plus, I weeded for an hour and a half three days in a row, and I was shocked how tired I got; I used to garden in seven-to-nine-hour stretches.) So far I'm not keen on the weft colors I sampled, but then I saw them mainly under florescent light last night; they offend me less in natural light today. I hope to sample with more purple, light green and gray wefts this afternoon. 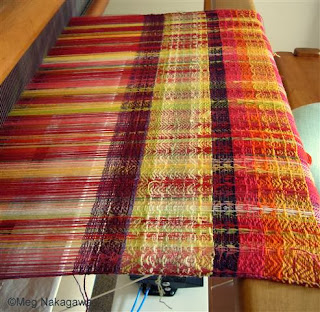 Meanwhile, I have been thinking about drafts in this post, (I don't like either, to tell the truth,) and reflecting on how my taste has changed, at least for the time being.

I used to love regular, fine, intricate drafts like the first one in the post, and fussy patterns one can make in networked twills. I wouldn't say I dislike them now, but the intricate regular patterns in two colors or values, I've seen enough of for now.

Dot and I were wondering why my taste has changed so quickly/noticeably; whether it's because of my collage experience; of having seen many paintings I didn't used to pay attention to, of the Cubists and Surrealists persuasions; or having thought so much about color planes via my Cubism class. What I would like to see in my cloths are bigger and distinct color patches and bigger graphic/geometric motifs. I think.

I only have vague, blurry visions of what I think I'd like, but one of the ways I thought to try is to use the tapestry technique and, say, have three separate color areas horizontally, in erratic shapes and sizes. Something like this, though more organic: 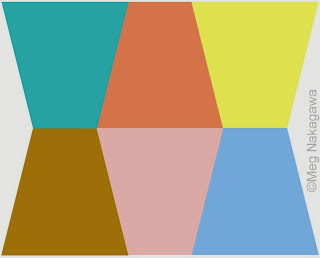 Unfortunately the current warp is not suitable for this experiment. The colors are mixed randomly, in parts frequently, and some of the yarns I used are outright unsuitable as warps, too soft and prone to break, (Mom and I discussed how these should be used only as wefts in Feb,) but oh, the red was so saturated and I couldn't help myself. Anyhoo, some of these warp yarns wouldn't tolerate the handling required in tapestry technique, at least not in the way I do it. My next warp idea may be more suitable? 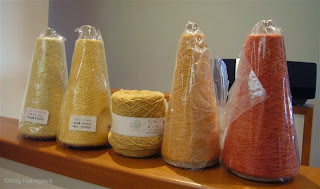